Site of a Byzantine Last Stand

Having thus celebrated some achievement, it’s time to go back into the past again this post and pick up the story of the 2015 trip to Sicily. As you may remember, I had got through my report of the International … Continue reading →

Well, the paper submissions are coming in, whch is very gratifying (though you still have two days to submit yours! Go on!*), and in the meantime I have been to Turkey and back and had food poisoning and recovered, and teaching is very nearly about to start. I’m often unsure when I look at my life that I really expected it to be like this when I finally ‘made it’, but here we are. And it seems to be a bit more than a week since I said anything here so it must be about time, and what it seems to be about time for is reporting on recent achievements, in the hope that at some point I will actually catch up to the genuinely recent ones. But right now, I have something from the end of March last year to bring to your attention. 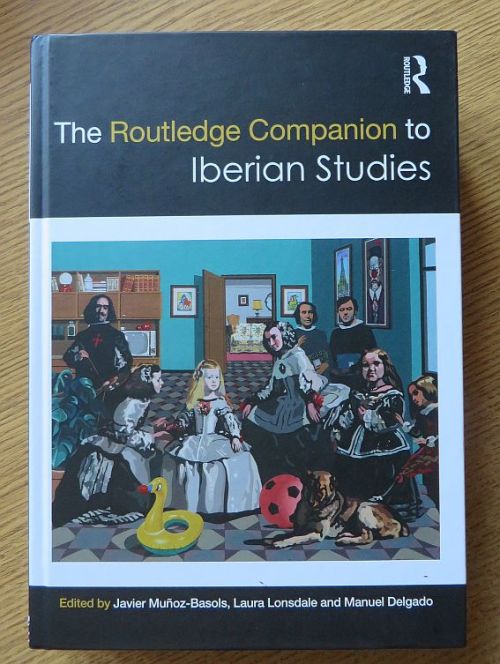 At that time, there appeared in the world this rather hefty volume, the Routledge Companion to Iberian Studies, edited as you see by Javier Muñoz Bassols, Laura Lonsdale and Manuel Delgado. And of course, the reason that I mention this is that I am one of the literally-fifty authors therein contained. Witness!

Beginning of my chapter therein, ‘Before the Reconquista: Frontier relations in medieval Iberia, 718-1031’

This really happened because I ate lunch with Laura Lonsdale occasionally for a period of three years, but it’s real work despite the inside connection. This chapter represents the first substantive thing to come out of my ‘new direction’ on frontiers, and it aims basically to set the chronological limits of what I think of as ‘my’ period of the Christian-Islamic frontier in the medieval Iberian Peninsula, that being the one in which it didn’t, overall, move very much. In it, therefore, something like a standing frontier society can genuinely be spoken of. Subsequent periods, in which that was instead a dynamic, and forever normalising, frontier society are no less interesting, perhaps more so for some questions, but I argue here for a coherence of that static interval as a historical period and, further, that the fact that it doesn’t clearly belong in the narrative of the eventual expulsion of ruling Islam from the Peninsula, and so doesn’t really serve the teleology of the modern nation state, shouldn’t exclude it from study. After all, in the year 1020 Navarra was basically ruling what would become Northern Spain. That never happened again but that doesn’t stop it being interesting, and yet there’s almost no work on it, especially in English.1 So I argue here that the Christian-Muslim frontier 718-1031 was different from other frontier situations of the peninsula and set up dynamics of its own, which we should look at more.

This was an important publication for me in a number of ways. In the first place, I think it’s quite good, which is always heartening. Secondly, as you can see above, it is the making in print of a case I have often had to make in conversation for my period of study. Thirdly, it is the first of what I hope will be many things I write about frontiers, but which circumstances keep combining to push back compared to my other work. But fourthly, you may have noticed, if you happen to keep track, that publication had rather dried up for me after 2013. After a pretty steady output of stuff either accruing from my Ph. D. or other projects I was employed upon, and a real boom of stuff in 2013, I had out a review and two book chapters in 2014, neither of them on my cutting edges of research, only a privately-published exhibition booklet in 2015 and nothing at all in 2016.2 It wasn’t that I wasn’t producing stuff, but misfortune after misfortune struck it: things were not accepted, things that were accepted were delayed (and still are…) and there are still worse stories I shall tell in their due season. It was, therefore, something of a relief when the bad patch finally ended. There are more to report after this, but this is the one that turned the tide. I humbly recommend it to the audience. The actual citation:

Boring statistics, because I still like those: unlike most of my work, this was never presented live. I wrote it, pretty much to order, in Birmingham in June 2014, in conjunction with another related article which is the subject of one of those worse stories just mentioned and never came out. I took it through two more drafts even before I had a response from the editors, largely because of the development of the companion piece, but the actual version for review in light of editors’ comments went in in July 2015, and the post-review version in December 2016. After that point, as you can see, things moved fairly fast, but still, time from first submission to print is a pretty desultory two years nine months, worse even than my average such interval. But when it did come out, it was very gratefully received!

* Wow, in fact, two more submissions even as I’ve been writing this!

1. Predictably, now that I check there is actually more than I realised, principally conference volumes resulting from the millennium of this unusual episode. I knew about Ángel Juan Martín Duque, Sancho III el Mayor de Pamplona: el rey y su reino (1004-35) (Pamplona 2007) but not about Ante el milenario del reinado de Sancho el Mayor: un rey navarro para España y Europa (Pamplona 2004)—though this seems mostly not to be about Navarra—Isidro Gonzalo Bango Torviso & María del Carmen Muñoz Párraga (edd.), Sancho el Mayor y sus herederos: el linaje que europeizó los reinos hispanos (Pamplona 2006)—almost entirely art history—or Gonzalo Martínez Díez, Sancho III el Mayor: Rey de Pamplona, rex ibericus (Madrid 2007), so I have some reading to do if I can get hold of any of these. There’s still nothing in English at all beyond two encyclopedia entries by Teresa Earenfight and snippets of books by Roger Collins as far as I can see, however, and there are few who snippet better but it’s still not what you could call deep analysis.

2. I seem not even to have graced the booklet with a blog entry! It should therefore at least get a citation, which is: Jonathan Jarrett, Inheriting Rome: the imperial legacy in coinage and culture (Birmingham: the Barber Institute of Fine Arts 2015).

Rethinking the Medieval Frontier: Call for Papers for Leeds IMC 2019

This is not the post I planned to have up next but the need to post it has suddenly caught up with me. I apologise for the very short notice, but, do you work on frontiers? Would you like to be at the next International Medieval Congress at Leeds in July 2019? Then please read on and respond!

The research network Rethinking the Medieval Frontier has been coordinating research exploring medieval frontier spaces, both geopolitical and immaterial, since 2015. It exists to encourage the generation of complex, transportable models about frontiers, boundaries and borders, based in medieval evidence, which have the potential to inform and transform approaches to frontiers and boundaries in other periods and fields. We now invite proposals for 20-minute papers on such subjects, based on any area or areas of the medieval world, construed as broadly as possible, for the International Medieval Congress at Leeds in July 2019, our third appearance at the IMC. Please consider becoming part of our endeavour! Possible topics could include:

Please send proposals, including title and an abstract of up to 250 words, to: Jonathan Jarrett <j.jarrett@leeds.ac.uk> by 24th September 2018. Please note the short deadline. We are especially interested to hear from scholars from outside the English-speaking world. Although the normal language of the Congress is English, we may be able to offer help with translation or preparation of talks; please mention this in your submission and we will discuss it with you.

Posted in Frontiers, Next paper is due...

An awful lot of numismatists in Sicily, I

The progress of this blog continues surreal. I returned from India yesterday, and am nearly three years overdue in writing the next post, about going to Sicily. Nothing loath, here goes, in an attempt to write maybe my shortest ever conference review about one of the largest conferences I ever went to, the Fifteenth International Numismatic Congress, which was held in Taormina, already mentioned, from the 21st to the 25th September 2015. It is too large for one post, in fact, and there is a very obvious break-point in the middle, so this will be part I of II.

Logo of the XVth INC

I travelled to the INC in a sort of party of people one way or another connected to the Barber Institute of Fine Arts and its coin collection, which I’d still been in charge of when I signed up. We arrived the night before, I think, bussed in from Taormina’s delightfully, er, unreformed airport, past those Byzantine graves already mentioned, and stayed in a tiny but charming hostel room for the duration. The papers were split across four different venues in the town, all splendid and close by each other; it was easier and quicker getting between sessions here than at Kalamazoo, for example, than whose campus the whole town might even be smaller, but one had to resist buying tat (or just coffee) between each one in a very definite way. Proceedings began the next morning with a series of welcoming addresses, but I’ve no memory of those and no notes on them, and one was by someone I know, so I think that for one reason or another I didn’t get going until later. The best way to record what I did go to seems to be to list the papers for each day, then make remarks, but that still winds up fairly long. So I shall put it behind a cut, but encourage you to look even if only for the pictures, which are not what you’d expect from the average academic conference. END_OF_DOCUMENT_TOKEN_TO_BE_REPLACED