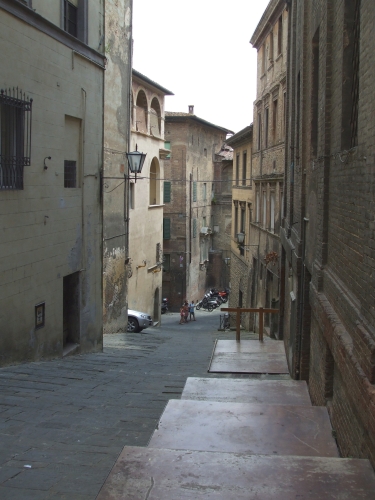 We left this story at the point when, by the kindness of Eileen Joy, I was able to put my bags down and walk around the town for the first time since my arrival. My camera was depressingly low on battery, and I was depressingly low on time, but a number of things got photographed anyway. How many, well, too many to have all of them on the front page, so let the above and below whet your appetites or not and the rest are below the cut. 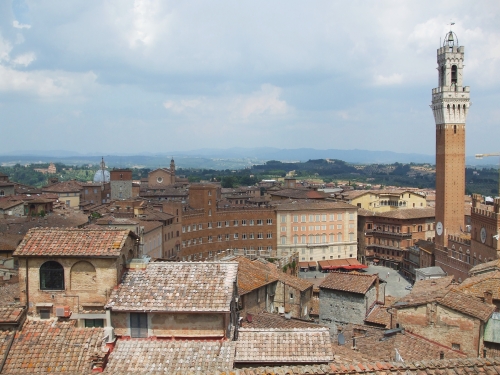 Once loose in the streets of Siena, I rapidly realised that they are largely quite narrow and tall and always, always, climbing up out of the centre. 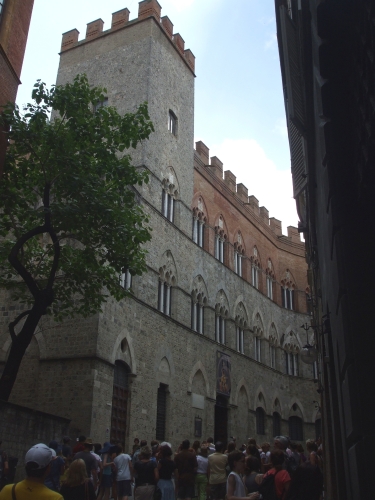 They are punctuated, however, by a myriad of people, and they’re not even all tourists, though they know the tourists are there: 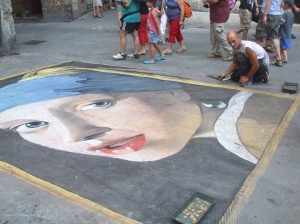 I swear, this chalk drawing was 99% done when I first passed it, and it was 99.1% done when I next passed it three hours later. He must get it all drawn by about ten o’clock in the morning and then spend the rest of the day nearly finishing it so that people keep dropping money in the trays. Nice work though! 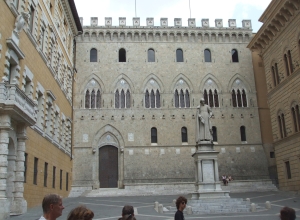 Now if my bank looked like that, I’d probably have worried about my overdraft more. This is the sixteenth-century palace that houses the Monte dei Paschi di Siena Bank. I very rapidly decided, however, that if there was only time to do one thing, it ought to be the cathedral, and as it turns out one could easily spend all day on the cathedral and its associated museum and outbuildings. The actual duomo, the crypt, the baptistery and the museum can all be got into on one ticket, which is not much more expensive than seeing any one of them; even though I didn’t have time to go round them all, I didn’t feel at all ripped off. But really, as soon as I first saw it from afar, I knew I had to get in… 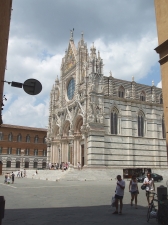 … and this did not diminish on coming closer…

… and grew considerably on actually being close enough to get the full depth of the detail, which isn’t really going to come over in a 500-pixels-wide photo, but let’s have a go anyway: 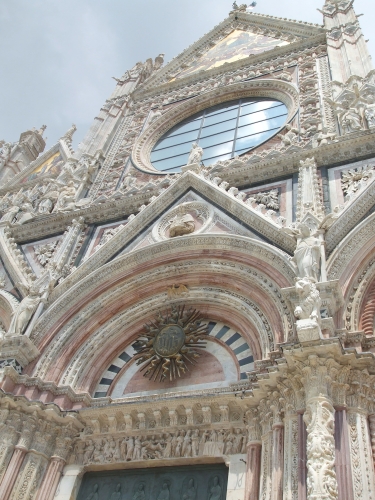 And it doesn’t get any less marvellous inside either. Some of the gathering did, somewhat unkindly, describe it as ‘like being inside a giant mint humbug’, but never mind the stripes, check out the space, the light, the omnipresent decoration: 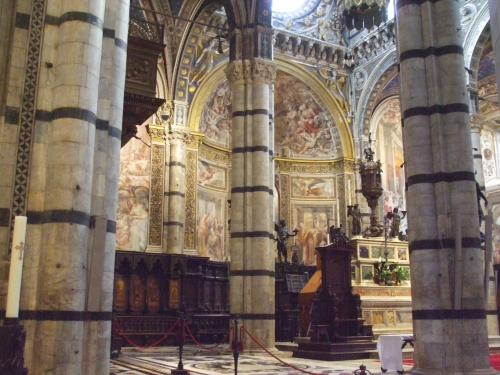 The floors are covered in carved marble depictions of Biblical scenes, with stone walkways between them: 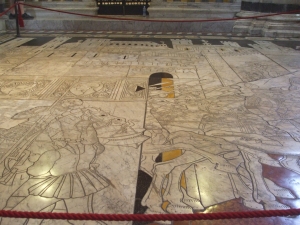 And once you’re done looking down, you can look up, and, wow: 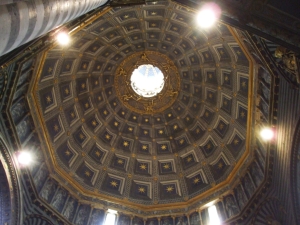 From the cathedral I next went to the crypt, but I didn’t get any photographs there, partly because it was forbidden but mainly because I couldn’t figure out what had happened. Some fairly major structural rebuilding had obviously gone on in there in the past, and the gorgeous if damaged fresco painting, which really is lovely, is largely fouled by bracing for the choir above. I learn from the Internet that this is not an old thing:

Despite its name and location, the Cripta is not exactly a crypt – it was never used for burials. It was constructed at the same time as the Duomo – in the 13th century – but Siena’s citizens barely got a chance to enjoy its frescoes before it was filled with debris and abandoned. Expansion work on the choir beginning in 1317 required dismantling the crypt’s vault, while the construction of the baptistery soon destroyed the facade. The crypt was subsequently used as a storeroom for construction materials and closed up for good. It lay unseen for nearly 700 years until its re-discovery during routine excavations in the Duomo in 1999. The room opened to the public in the fall of 2003.

Here is someone else’s shot of the fresco showing the Annunciation and Visitation, which manages to largely get round the blockages: 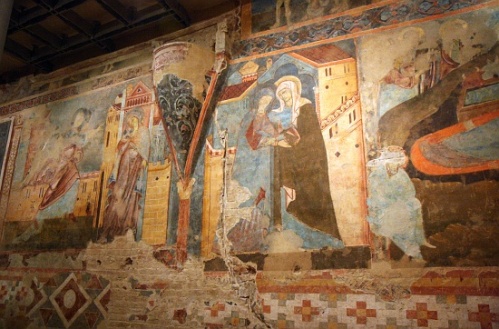 So then I went into the museum. There is a lot in the museum, metalwork of all ages and all intricacies, liturgical wear in splendid ornateness, various sorts of treasure, and photography forbidden throughout, but I couldn’t resist this one shot: 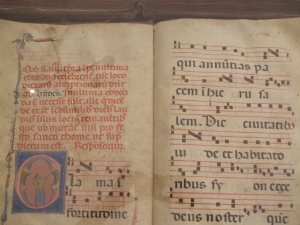 They have a whole room of these things up in the rafters, which no-one seemed to be looking at. Most of it was Renaissance but this example, and a few others, were thirteenth-century. Lots of pretty things. However, the main reason to be in the Museum is that it’s through it that you can get out onto the old cloister’s westwork, and you are allowed right up to the top of it, where low railings and a narrow walkway offer a connossieur’s vertigo experience. Here it is from the ground: 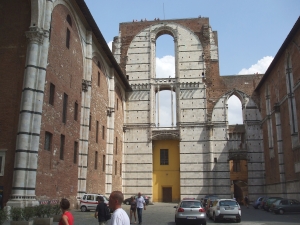 There are two levels, the sort of shoulders there, from which you are this high respective to the cathedral proper: 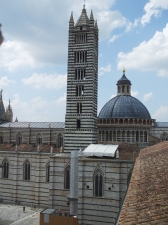 and then the very top, from which the perspective is like this: 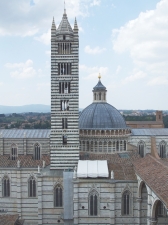 Notice that the photographer is now *above* the dome

Now this was very close, given the low railings and the people trying to get up and down, to the limits of what my vertigo would take, but the views made up for the shaky legs, oh yes they did: 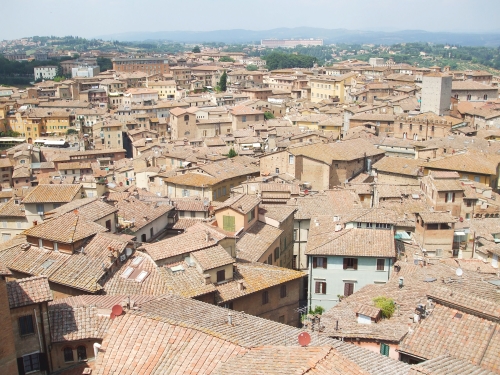 And once I had got down, I wasn’t quite ready to take in any more art or splendour so instead I got gelato and waited till my heart-rate had dropped. But even if I hadn’t done that to myself, I suspect I might already have been full of medieval gloriousness. So I went back to the In The Middle flat and recovered my stuff and talked with learned ladies (very Tuscan eh?) until it was time to go.

On the train back to Florence I had another go at photographing Poggibonsi, but although the picture is much nicer, it has nothing recognisable in it, so I’ll spare you. I did manage this through a train window though: 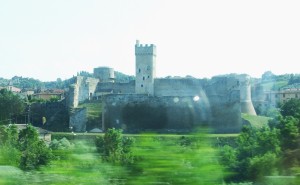 The ruined fort at Castellina Scalo seen from the railway

Florence strikes me very differently to Siena. It is obviously much larger, and thus it has some important things that Siena lacks. These include, but are not limited to, punks, metallers, beggars, street vendors, skateboarders and fast food outlets (though this phrase does have a different sense to it in Italy I think). My impression, after thinking about it, was that this implied it was possible to be poor in Florence and survive: in Siena, nothing so lower-class was economically viable. Florence might therefore be the more interesting place to live, though perhaps in the apocryphally-Chinese sense. It does, however, also have a cathedral: 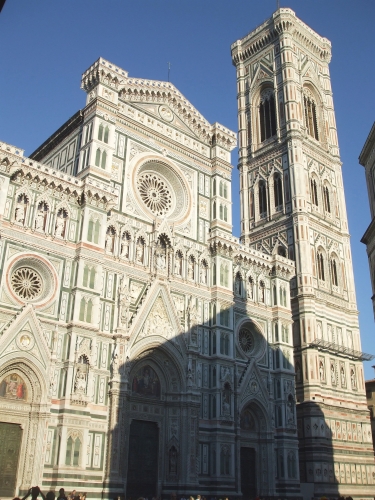 … and, you know, it’s bigger and stuff, but I brought back the largest poster I could buy of Siena’s, simply because of the impracticality of stuffing the whole building into my luggage and getting it home to have all to myself. I felt no such urge with Florence’s, though if there’d been time to look inside that might have changed. As it was, there was time for pizza, just about, at a place which I wouldn’t recommend, really, except for the view: 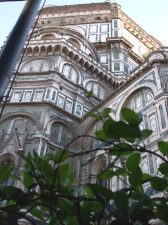 I got increasingly stressed as the staff here dawdled over the bill, as I was running out of time to make my train back to Paris. Oh, how little I knew. I arrived back at the station with ten minutes to spare, and the train didn’t turn up for another two hours. By the time we actually got into Paris the next day, because its lateness through the Alps had run it into morning rush-hours everywhere, because, I guess, all its engines had been borrowed for other duties (and we had to change engines every time we crossed a border and twice in Switzerland), we were a full six hours late and the lovely French group sharing my compartment had missed a full day of work. I didn’t mind, though, because what that meant was that I woke just as we were comng down off the north side of the Alps. The mid-morning sun therefore lit scenery I’d only before seen in Heidi, and since I was good for little more than to sit and passively watch the world pass by, it was good that it was such a damn beautiful part of it to do that with. Sadly, though, by now my camera was completely dead, so there are no photoes; you’ll just have to do the Dijon to Lausanne railway yourself some day. I need to get out more, because some of it’s like that. I was quite glad to have been given the excuse to do this, by the time I finally got home.

8 responses to “Cambridge to Siena and back part three: really gratuitous photo post”