University and College Union pickets at the University of Leeds

Well, just as with the last time I wrote one of these, we are still on strike again, so there is now time to write it. With the trip to Istanbul that immediately preceded the start of term now finally dealt with, it’s time again to look at my life academic as it stood at the current date of my backlog, sadly the end of 2016 but for once I am catching up, and take stock of what was going on and, of course, what of it still merits blogging about! END_OF_DOCUMENT_TOKEN_TO_BE_REPLACED

We left this story at the point when, by the kindness of Eileen Joy, I was able to put my bags down and walk around the town for the first time since my arrival. My camera was depressingly low on battery, and I was depressingly low on time, but a number of things got photographed anyway. How many, well, too many to have all of them on the front page, so let the above and below whet your appetites or not and the rest are below the cut.

END_OF_DOCUMENT_TOKEN_TO_BE_REPLACED

Cambridge to Siena and back part two: the actual conference

The Università per Stranieri in Siena is just opposite the station, a little way out of town proper. This had the rather strange advantage that I could walk in with my bags and register, more or less straight off the train. I almost immediately ran into Eileen Joy too, which added to the feeling that I’d walked into a weird parallel-universe version of the Academy. The New Chaucer Society are to be congratulated on the quality of their freebies and the friendliness of the staff, and also on the quality of the nibbles and the coffee, though the latter did keep running out. It being, you know, a university in Italy, I don’t believe they can have been unprepared for how much Italian coffee conferring academics can drink, I think it was just parsimony somewhere which was a pity. Otherwise, though, initial impressions good.

Unfortunately I now tried to be clever. I decided that I didn’t really stand to get much out of the keynote, but that I could use that time finding my hotel, getting a much-needed shower and then popping back down for sessions that looked more likely to interest me. Sounds cunning doesn’t it? But friends, it is hot in Italy around midday in July. By the time I found the hotel, with only one wrong turn but a long one, caused by a road with both its ends on the same roundabout (see reflections on Siena’s geography elsewhere for context to this sort of confusion), I was very much more in need of a shower than I had been. And I was too early for check-in, which opened at the same time as the sessions I wished to return to, so they wouldn’t let me in. The guy on the desk could have been less helpful, but only by refusing to speak English. So I had to climb back down the hill in the full afternoon sun, with all the same bags I’d schlepped up there. And of course I’d had really very little sleep, so this came hard and I sweated the more. I arrived back at the conference with white bands across my shirt where the bag straps had rubbed my sweat dry and very much less than presentable. So bad did I look and feel that I dived into the loos to try and sponge down a bit, both me and the evil-smelling shirt, and found that of the two men’s loos one had a working dryer and one had working taps, if by working you mean they ran for two seconds if you held your hands just right beneath them. It was not easy to look like a scholar or indeed smell like one in these circumstances. I later discovered in fact that more or less everyone was feeling like this, because the room containing the keynote had had no functioning air conditioning, but I still think I looked more obviously freaky than most because of the sweat-stains, which I could only partially wash out with the resources to hand, so I spent most of the day shamefacedly keeping safe distances from people and trying not to stink, which probably didn’t help me make friends.1 As you may imagine, my good impression of the Università per Stranieri’s facilities had now sunk rather. 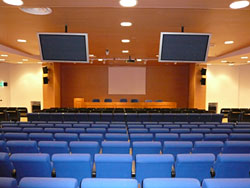 All very fine till the air conditioning fails

But, I was indubitably at at least part of the 17th Biennial Congress of the New Chaucer Society, on the 17th July 2010, my notes tell me so. So, the papers!

I chose this one because it looked like the best opportunity I’d ever get to collect a set of legends, Bruce Holsinger and Carolyn Dinshaw being names I’ve seen in many a place, spoken with awe or envy often, but until now names only. So this was something of an education.

So that was a good one to end with, and there were lots of questions, not least from Karl Steel and Jeffrey Jerome Cohen, about animals and materiality respectively, and Mary Kate Hurley suggesting that animals’ wishes (like the cat that wants to go out) ought to lead us to question our self-determination. Mary, blog more will you? Cheers. (These people get mentioned because I knew them by name; there were other fine questions asked too, especially about parchment production by people who knew their stuff, but I can’t name them alas.) All lively and clever, anyway, even if far out of any field where I could say who was saying new things and who wasn’t. Sadly, I didn’t quit there.

51. Latin and its Rivals, 2: Chronicles in the Age of Chaucer

I chose this because it looked like the most hardcore historical thing on offer and I figured it would be nice to get back to an area where I could evaluate a bit more rather than being dazzled by big smiles, human and non-human warmth and bait-and-switch rhetoric. I was quite wrong.

Neither Bates nor Prescott had actually been able to get there, and their papers were therefore read for them. Not a good start, but actually those were the better two, short (despite not being in control of the text) and punchy; I enjoyed the Prescott paper so much that I wound up fruitlessly engaging the guy who’d given it about it afterwards, to little avail as of course it wasn’t his work. Stow overran by ten minutes and I personally tuned out when he revealed that he was summarising a paper in EHR.2 And Clark, I don’t know how much he overran by because I was the second person to walk out, I gather he went on right till the end of the session and nobody stopped him. It wasn’t uninteresting, even, being as he was suggesting that chronicles were actually getting out of their houses and being read, for example, at universities, but some of the audience might have liked to discuss at least a bit…

Anyway, there it was. Realising that I still wouldn’t be able to get to the hotel I made another slightly more successful attempt to wash and brush up and dry out—I must have been doing something right as I was told I resembled Johnny Depp by a lady I shan’t name and shame; before I had the beard I only ever got compared to Hugh Grant—and headed for dinner. Dinner, at a place called the Enoteca Italiana, was gorgeous, I mean sumptuous, I could see immediately why the conference fee had been so high and suddenly I didn’t mind. They served excellent wine and rather good food (albeit with almost no vegetables…) to a gathering of maybe a hundred and twenty people without let or hindrance and we all left very merry. Also, I found myself accidentally sitting at the same table as Derek Pearsall, for one, someone I knew vaguely from London with whom I turned out to have a lot in common for two, and last but not least Dr Virago, who is awesome (as indeed I had been told, but it’s always nice to find one’s friends are right). A wander through the streets afterwards with various of the party and some less recordable discussion was a welcome tonic too, and when I did, eventually, get into my room at the hotel, and shower at LAST, I was able to sleep sound and satisfied.

I have no notes on what happened the next morning, which is hardly surprising because it was US (as in, we have seen the enemy and he is…)

I thought we were pretty awesome personally, as were our various learned commentators, blogarific and otherwise, but it’s weird how little any of us have blogged about it. My paper’s here, with the Powerpoint presentation here, for what it’s worth; I don’t see myself doing anything further with it, but I should warn you that it’s nothing like as humane as Jeffrey’s or as deep as Stephanie’s, and features 100% fewer robot Chaucers than Carl’s. Mainly what we learn from this panel, I think, is that it’s a very bad idea to let me near the controls of a computer with a live Internet connection that’s hooked up to a projector. The urge to improvise illustrations for other people’s remarks is very very strong.

Now after that I went to find lunch with Eileen Joy and Karl and Mary and a range of other people less blogular but equally good company, and it was nice, and then thanks to Eileen’s great kindness in letting me drop stuff in their flat for a short while, I was able to actually do some touristing. And that will come post after next, but first, I am long overdue with a range of important newses and they will come next.

1. But would embracing the stench have helped more, that’s the question isn’t it. I like to think mine was the path of a gentleman.

2. “The Continuation of the Eulogium Historiarum: Some Revisionist Perspectives” in English Historical Review Vol. 119 (Oxford 2004), pp. 667-681, if that’s of interest.

Posted in archaeology, Blogroll, England, General medieval, Institutions, Next paper is due..., Uncategorized

Cambridge to Siena and back, part one

There was also that other conference I wanted to report on… I plan to mainly do this as photoblogging and travelogue, since I made it to so little of the actual conference; that will get a post in the middle, and the third post will be photos of Siena and Florence, but this one is about the journey. 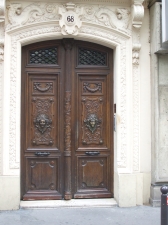 Doors to a building on the Rue du Temple des Filles, Paris

There were some medieval things on this journey, but not many, and these aren’t one. END_OF_DOCUMENT_TOKEN_TO_BE_REPLACED

Posted in archaeology, France, General medieval, Italy, Next paper is due...