Underneath and atop Oxford Castle, and a query about Dover

Last year after Leeds I embarked on a short tour of the country with two visiting academics, which netted me a number of medieval tourism photos. I’ve been meaning to stick some of these on the blog since then, alas, but now I have a question around which to hang the first one, so it finally emerges. Any journey must have a beginning, you see, and to that end we started by examining the most obvious medieval thing in Oxford I’d never looked at, the castle. 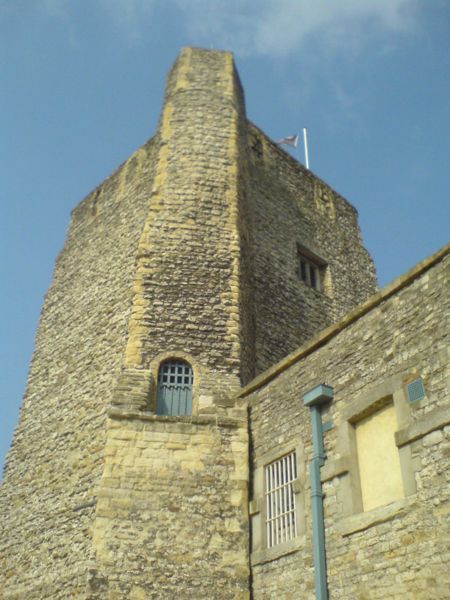 St George’s Tower, Oxford Castle, not my photo but a better one from Wikimedia Commons

Now, this time last year I was not as well informed about the castle as I subsequently became, even after the tour of it. It transpires that you can only go round Oxford Castle as part of a guided tour, guided by someone in period costume. Oxford Castle became a prison in its later life, was condemned as unfit for human incarceration in the 1970s, if I remember rightly, and was finally actually closed in the 1990s, so there’s a fair amount of period to choose from and no problem finding people who remember being in it, indeed, sharing a cell smaller than most houses’s bathrooms for most of the day. Even in the medieval parts of the building, by no means all of it, the penal motif is a big part of the display, which can lead to embarrassment for many… 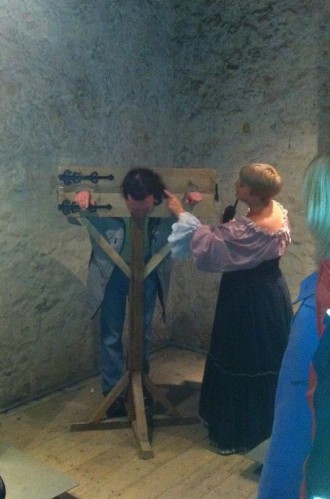 I don’t know what this long-haired rascal was accused of but you can tell he was up to no good. Photo by the Naked Philologist

But what I didn’t then know and shortly after found out was that St George’s Tower at Oxford Castle is now thought to be one of a very small number of buildings, the others including also the rough-cut-but-lovely “Saxon Tower” of St Michael at the Northgate, on Oxford’s Cornmarket of which, sadly, I have no photos, which qualify as pre-Conquest Romanesque. In scholarship old enough, you see, Romanesque architecture is one of those things that the Normans brought with them at the Conquest, but since another of those things was supposed to have been stone castles, Oxford Castle kind of scores double. This is an art-historical judgement, I should say, not an archæological one, based on the style of the arches in the current ground floor of the tower (of which, vexingly, I took no pictures), but if it’s right, then this here crypt, which is after all underneath those arches, in the locution if not the manner of Flanagan and Allen, is yer actual Anglo-Saxon building, although the capitals seem to have been moved in from demolished Norman work in an eighteenth-century rebuild.1 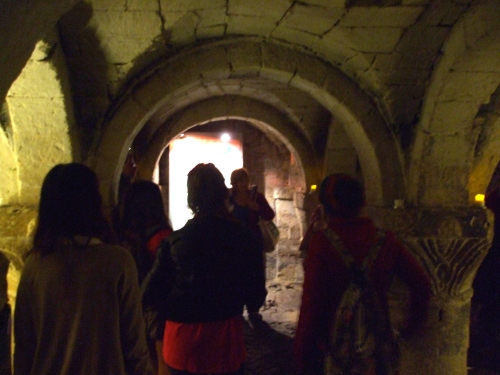 Vaulting in the crypt chapel underneath St George’s Tower 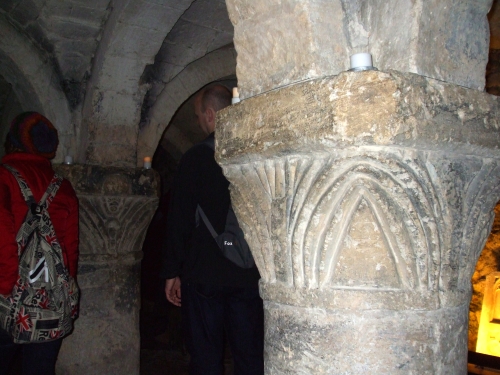 Norman capitals in the crypt vaulting

Now, I can more or less cope with the idea that there was some pre-Conquest building of stone castles, myself, but even if this should cause you to bristle it needn’t cause you to bristle much. Firstly, the idea of pre-Conquest Romanesque has been more or less set ever since enough work was done on Edward the Confessor’s Westminster Abbey to make it clear it was built in that style.2 Secondly, Oxford Castle is still very late, probably the 1050s, so again Edward the Confessor’s reign, and of course we know that Edward was raised in Normandy and installed a number of Normans at court, so if it’s important to you to believe that ideas can’t cross running water except in the heads of foreigners and you must have all these things designed or built by Normans, that could certainly still be true. It’s still a sort of æsthetic Norman Conquest. However, it does raise a question or two about Oxford Castle. Once, you see, it was assumed that the stone tower was later than the castle mound, which is believed once to have worn a sixty-foot wooden tower. The sensible sequence was first a motte with wooden tower, then an upgrade to the castle necessitates a stone tower on a bigger footing so down on the ground it must go, and the motte remains in service only as watch-post if at all. After all, with a perfectly serviceable tower there with what would have been a good view of the locality before someone put in all these darn spires, why would you build a motte? But that now seems to be what happened. 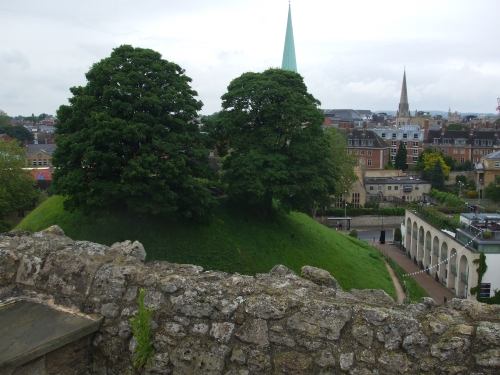 The Norman motte, now bashful beneath its tree cover, seen from the top of St George’s Tower 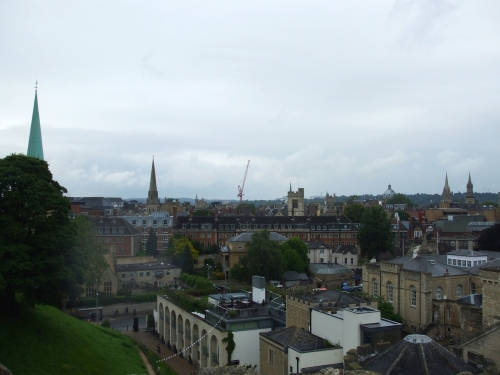 View of Oxford from the tower

I don’t have an answer to that, but I do have another question. Years ago, when they were refurbishing Dover Castle prior to doing it up all Henry II, not long after I’d discovered the world of blogs, I’m sure that I read some stories, probably on News for Medievalists, about an exploratory dig there that located a stone precursor to the Norman castle, which at the time was considered to be an even earlier Norman one on the grounds that everyone knew that the Anglo-Saxons didn’t have stone castles etc. Now, in this story I sort of remember, someone was saying that probably it had been a Saxon castle after all, and I thought, ‘Yes, that would explain why one of the things William of Poitiers says that Harold, the later king, had to swear to Duke William when in Norman captivity was to surrender Dover Castle on demand; maybe it wasn’t just its location that made it special.’ (Certainly, from Normandy that location seems like less of an advantage). I’d told a few students this argument for there being a Saxon castle at Dover before I thought to try put a citation to it and I came up with nothing, hardly any sign that there’s been a dig there, let alone one that located an earlier building. And of course News for Medievalists retires its posts after a couple of years so I couldn’t recover the original spur to thought. 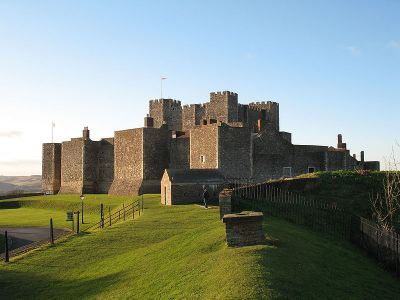 Dover Castle as it now appears, from Wikimedia Commons

Local enquiry has at least revealed to me that I may not have been imagining the whole thing, as there was apparently a sectional trench dug between the castle and the church of St Mary in Castro, which was even then believed to have been within an older Anglo-Saxon fortified precinct, in 1962 to 1963. This dig, led by the revered Professor Martin Biddle, has never been published, but his generosity with personal comments to those trying to write about it has leaked information out into the grey literature somewhat.3 Nonetheless, I can’t immediately find any signs of a stone building located; the closest I can get is a ditch that might have fronted such a Saxon fortification on the site of the Norman motte (which is in turn not quite the site of the Plantagenet castle). Did I make this up or dream it?4 Does anyone else remember reading or hearing such a detail and if so, where they did? Or should I abandon it, until such time as I may possibly run into Professor Biddle again? All thoughts and information welcome… Anyway, this isn’t the point, the point is, Oxford Castle’s really interesting, it’s probably even worth the contact embarrassment of the tour to see it. But if someone felt able to answer the other question that would be grand too!5 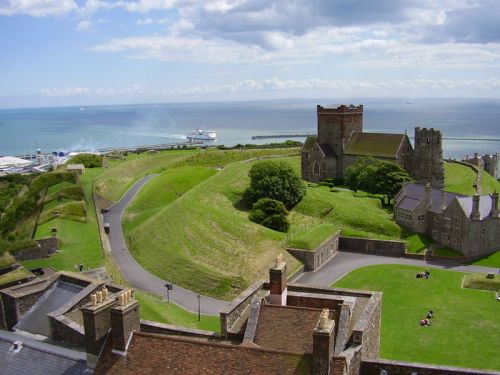 St Mary in Castro on its suspiciously-fortification-like mound, sporting a reused Roman lighthouse as its smaller tower (true fact). Photo from Wikimedia Commons

1. I haven’t found actual publication of this new judgement, but it occurs widely on websites like that of the Ashmolean Museum that one would hope are well informed. I also find it in a consultation published by the Heritage and Specialist Services Team of Oxford City Council, “Historic Urban Character Area 12:
castle and periphery – Oxford Castle”, part of the Oxford Historic Urban Character Assessment, all of whose reports are online here. I take that to be some kind of official statement, at least!

3. There is an extremely summary report in David M. Wilson and D. Gillian Hurst, “Medieval Britain in 1962 and 1963” in Medieval Archaeology Vol. 8 (London 1964), pp. 231-299 at pp. 254-255, which in fact discusses the apparent motte under St Mary in Castro and says, “There is now no question of these earthworks having formed the motte or defensive core of a castle erected by Harold in 1064-66, though the area may have been included within defences of this date….” (p. 254), so I obviously got this idea wrong somewhere; the piece goes on to suggest that what we’re looking at here was the Saxon burh, though if so, it must have been one of those so small that the line between burh and fortress would be very hard to place. Consultation with Professor Biddle is however extremely apparent in Alice Thorne, “An Archaeological Desk-Based Assessment, Walkover Survey and Watching Brief of land at Dover Castle New Admissions Building, Dover, Kent”, Archaeology South East Project no. 3127 Report 2007251, online here, which includes not just details from Professor Biddle’s personal commentary but also some sketches provided by him of the site phasing, all of which may constitute as much publication as there is of the site for now, and this is where I get the suggestion of a ditch outside a Saxon rampart (pp. 14-16).

4. I’m very conscious of the possibility that I may have transported an interpretation from my reading and work on Sant Andreu de Tona, one of my favourite Catalan example sites, where a stone precursor to the Romanesque church was discovered in a 1940s dig, which has been assumed must also have been Romanesque because we ‘know’ that pre-Romanesque rural churches here were built in wood. The same possibility of outliers arises here; see Jonathan Jarrett, “Centurions, Alcalas and Christiani perversi: Organisation of Society in the pre-Catalan ‘Terra de Ningú'” in †Alan Deyermond & Martin Ryan (edd.), Early Medieval Spain: a symposium, Papers of the Medieval Hispanic Research Seminar 63 (London: Queen Mary University of London 2010), pp. 97-127 at pp. 104-108 and references there.

5. I also have to thank Professor John Blair for a number of conversations that have provided information used here or search terms with which I’ve found such information.

25 responses to “Underneath and atop Oxford Castle, and a query about Dover”