We’re still back in time to July 2015 with this post, on the day after the end of the International Medieval Congress just reported, but a rather different sort of content, because we had business to do with my imminent move up to this fine city of Leeds that day and it was timed for late in the day, which left us the early part more or less free to explore. After a somewhat abrupt start to the morning, therefore, we got out and found it unexpectedly sunny, whereupon like a pair of medievalists would we hit upon the idea of going and visiting Kirkstall Abbey on the grounds that it was close by to where we were looking at living (and where I now type this, indeed). And this was a really good idea; Kirkstall is a bit like having one’s own St Andrews or Whitby just close by, ruinous, confusing and æsthetically impressive. Of course, I was about to move into a community of scholars who know it well, but at this point I did not, and these photos reflect my general confusion as well as my delight at it. There are, therefore, quite a lot, though you’re getting less than half of what I took…

This is a set of enigmas all of itself, because what is still standing is about the least significant bit of it (unless you’re really into waste disposal) so the rest of it is quite hard to reconstruct in one’s mind’s eye.

Drain along one side of the guesthouse

But the real deal is the actual abbey, which looms impressively over everything in lordly fashion.

The tower and one transept visible over the treeline

But trying to work out how it all fitted together when it was up is not necessarily easy given the different and discontinuous bits that now remain upright.

Tower, the south transept (I think), south wall of the cloister and an impressively angled buttress

It’s not that there’s any shortage of standing fabric… 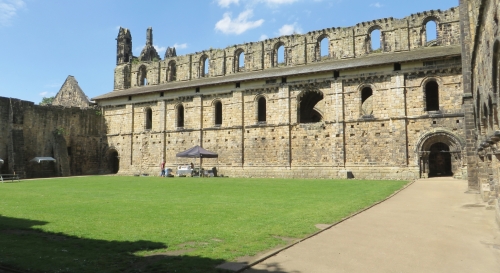 Ice-cream stall set up in front of one wall of the cloister, I guess the north one?

But with a fairly serious church, a big cloister, an abbot’s dwelling stuck in the angle between the two and some other separate buildings jointed at corners, and really not much signage, it rapidly gets easy to lose track of where you are. 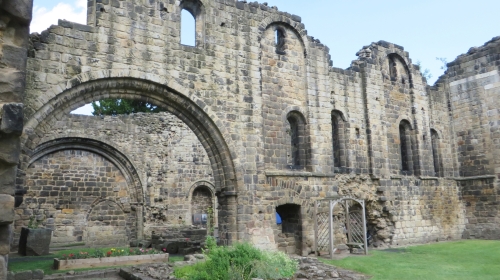 And before long you’re just photographing things on the grounds that you’ve walked round a corner and a photo just presented itself to you ready-made. And what’s wrong with that, after all?

I think this is the abbot’s residence seen from the church, but exactly how they connected I couldn’t now tell you

View from the west end of the north aisle of the church eastwards. I think 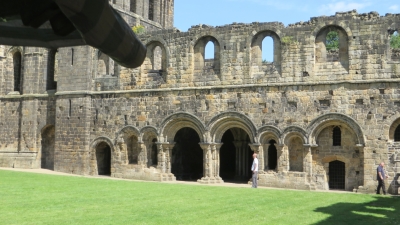 I’m fairly sure there are five different sizes of arch in this one wall, which is probably the east wall of the cloister but don’t quote me on it

Vaulting in the south aisle of the church, again I think

But because the ensemble itself is difficult to articulate, the small features become both more immediately apprehensible and more divorced from the context that might explain them.

A basin in the side-wall of one of the apsidal chapels in the east end of the church. This I more or less understand 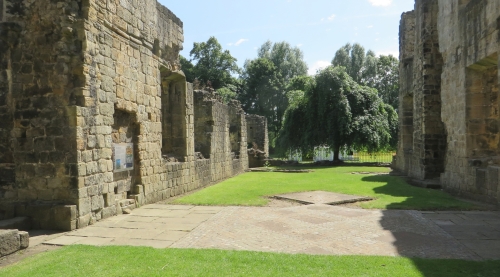 Tiles laid out in a diamond, presumably by modern design but I’m not sure why (or what space they’re in) 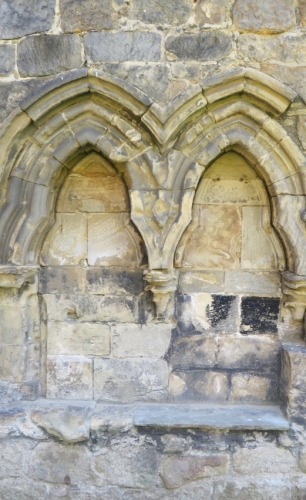 And I can see what these are, but why they were stuck into the cloister wall I’m less sure about. I suppose all that ambulation gets tiring?

These were presumably prestige tombs at one point?

And this I’m fairly sure was a crypt, though it’s above ground (and contained more opened tombs in its walls, one just visible in the space between near and far right columns here)

Let’s get a closer look at that vaulting! Not for any special reason, I just like vaulting

There are two special categories of feature that seem to have drawn our attention, however, of which the first could be entitled, “Inexplicable things people have done to windows”. 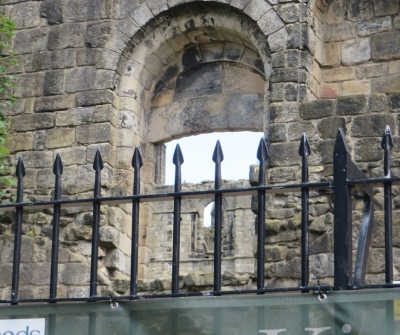 This seems a bit of a shame but simple enough

Sometimes the window you have isn’t enough and you’re just bored with curves? 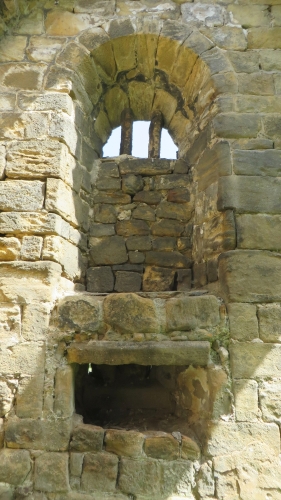 And I’m just not really clear what happened here

The other category, though, would have to be called “We’ve come about the drains”… 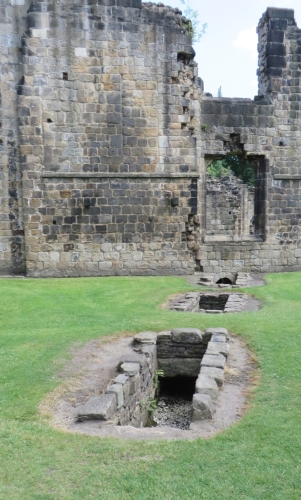 How can you not follow up these mysterious holes, after all? 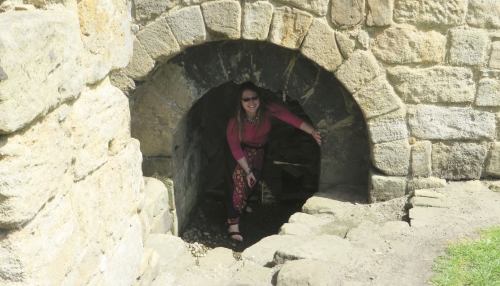 That said, there are always some who will take it too far 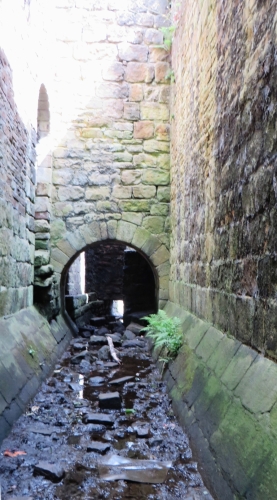 And eventually they drag us all down with them

But despite its relatively low level of investment in interpretation (I gather that there is more of this coming) the site is also very much in use, or at least was this day. I don’t just mean the randomly-occurring public, though they were there. 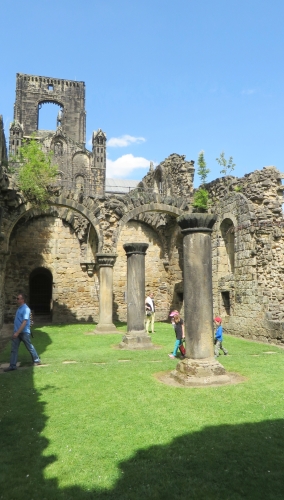 Presumably the actual photos these two were taking are available in some portfolio somewhere… they kept getting in my shots, anyway

But even as we arrived they were setting up for some evening event that was clearly going to involve no little sound and light, which led to some rather odd juxtapositions of medieval and modern.

At least it gives you a sense of scale…

And this is just an album cover in the making, isn’t it? Storm Thorgerson eat your heart out…

But I am obviously going to need another visit or five to sort this place out in my head, hence the optimistic post title. I have no idea what these walls are, for example, but I hope that some day soon I will.

Junction of a couple of walls I will hopefully some day be able to identify!