The excursion with which I preceded Leeds didn’t just go to Whitby, but called at Lastingham on the way back, which has a lesser but roughly contemporary significance as being a church founded by one of the earliest bishops of the English, Cedd of the East Saxons. That does raise the question of why he had a base in Northumbria here, but Cedd does seem to be a bit like a minor Wilfrid; he picked up land in several kingdoms, founded monasteries here and there and was at the Synod of Whitby in 663 deciding the fate of the Church of which he was a member, though unlike Wilfrid he died of plague in 664 so couldn’t create problems for Archbishop Theodore‘s grand attempt to make the English Church make sense from 673 onwards.

Church of St Mary, Lastingham, seen from the east, downhill

Cedd’s church is not what is now here, but what is here is almost as interesting if, like myself, you are a paid-up member of Team Romanesque. But for the dismal-looking sky, you could be forgiven for thinking I’d slipped a Catalan church in by mistake, couldn’t you? Round apse? Three-aisle layout? There are even double-arched windows in the tower, though they are trefoil arches rather than what you’d find in my area of study. The point is, anyway, this is an unusually Continental-looking piece of Romanesque building even if much about it is also typically English.

Once you get inside, too, the Romanesque impression continues: it’s rather delicately done here in fact but it does also do the thing that Romanesque does so well, of looking much more massive than it really should do given the space there is. 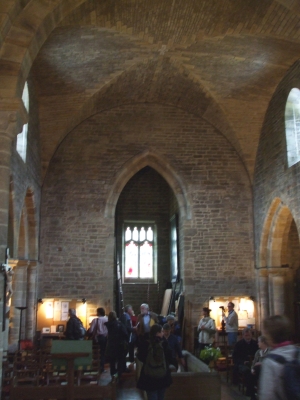 Nave and chancel of St Mary's Lastingham, with vaulting and internal Gothic arches

I include the people here more or less for scale, to support my point about constrained massivity, but you can also see here that we have Gothic arches inside; the whole building seems to have had something of a refit after a while and so here, arguably, we have the best of both worlds and indications that a reasonable amount of wealth was being spent here every now and then.

One of the pillar bases supporting the vault in the crypt

But beneath, beneath there are signs that recall that this was not the first church here. The crypt, as well as a vault that seems to have been lowered at some point, as the corners of the room (which I couldn’t get a good picture of) show, contains quite a bit of the oldest stone-work. This may include the four columns that hold up the vault; Glynn Coppack‘s view, which he generously admitted was not the only one, was that if there is any Saxon fabric in the building it is the bases of these columns, which seem to be capitals that have been turned upside-down. (Again, hard to photograph well in the light, sorry.)

But of course this still wouldn’t be Cedd’s church, which is very unlikely to have been stone anyway. Still, there are bits, here and there, that may not be that much younger. I had to have this one pointed out to me:

And yes, that is a tombstone recycled as a lintel. But also, in a tiny room off the crypt, which appears to be a blinded stairwell that doesn’t make sense any more with the upper floor, there are these, which if anything appear to me to be cross-fragments.

This reminds me of nothing so much as a picture used by John Blair in a 1988 article of the church of Bakewell in Derbyshire, where the cross fragments have actually been recycled into the walls. Here, apparently, they had less use for them and just dumped them in a corner, or more likely in a heap, whence the few remaining bits were eventually dumped in this corner come some later building works, because by then they were of antiquarian interest. And indeed, they still are, though as yet they have not had much study. The whole place is worth a look, then, not least because it’s a rather nice building, especially inside, but also because more than many a church, this one has a good few questions whose answers it has not, yet, given up. 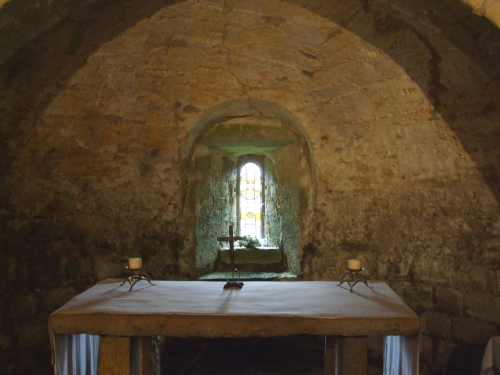 Altar in the crypt, where the mysteries should presumably be focussed

There were a few bits and pieces for sale here, as one might expect, and so I picked up Ian Wood’s Lastingham in its Sacred Landscapes, Lastingham Lecture 5 (Lastingham 2008), which is where most of my actual facts that weren’t vouchsafed by Dr Coppack have come from here. The Blair article mentioned is J. Blair, “Minster Churches in the Landscape” in Della Hooke (ed.), Anglo-Saxon Settlements (Oxford 1988), pp. 35-58, where pl. VII on p. 53 pretty much replicates the photograph linked in the main text.