Home isn’t where the medieval architecture is

There’s been quite a lot of change in my life lately, and though this post has been stubbed since January it provokes reflection on those changes, because for New Year 2014 I went home. Or at least, I went to where my mother lives and where I grew up, but what does that tell us? I didn’t even know this was there:

This, as you can tell, is not my photo, because I hadn’t brought a camera when we went a-calling in very early January. I firmly expected it to be locked, as per my general expectations of the Home Counties, but was happily wrong. The building is twelfth-century, for the most part, though the tower is fifteenth-century. There is some sculpture in it that survives from the earliest period, and some fourteenth-century wall painting, which seems to show the Annunciation and the Ascension; presumably other scenes from the Life of Christ were also once here, and these are now quite hard to make out but still there. I had only the very poor camera in my phone, which struggles badly with low light, and it couldn’t capture these, but the esteemed Highly Eccentric gave it a go with the camera she had with her, and if you want to see more that’s here. Of what I did take, this one shot came out sort of OK. 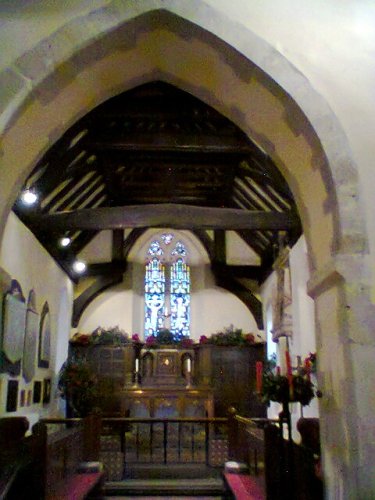 I grew up two miles or so from this place; it wasn’t my notional parish church, but it’s not much further away than that. It’s also decidedly more medieval, but I never went here before. That would be not least because then I was neither church-goer nor medievalist, of course, but it joins some reading about the area’s local history over the last year or so to leave me aware how little I understood of the idea where I grew up in the terms that are now significant to me. By a strange irony, I type this now about the same distance from where my mother grew up. Both these places have seen some change but what’s changed most is me as observer. One leaves home either in order to try and return able to support oneself or to make a new home elsewhere, I guess. One of the toughest things for me about the life academic is how hard it makes that latter for those who do not early get the elusive permanent job. Wherever one is won’t be where one is next, and the roots always have to be ready to come up. I suppose this post is an occasion to reflect, then, that even our deepest roots are not as deep as we sometimes think they are, and that it doesn’t have to be in youth that one plants them.