I promised you a couple of posts ago a set of surprising medievalist photographs, and now the post has come. You may remember that I was being shown hidden bits of the Middle Ages lying in the general area of Dudley in the Black Country, but the second of them was out by some way at a village called Claverley. Claverley is quite well vintaged in general… 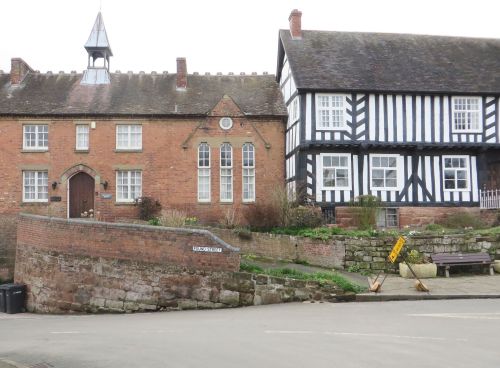 … but our target was All Saints Church. 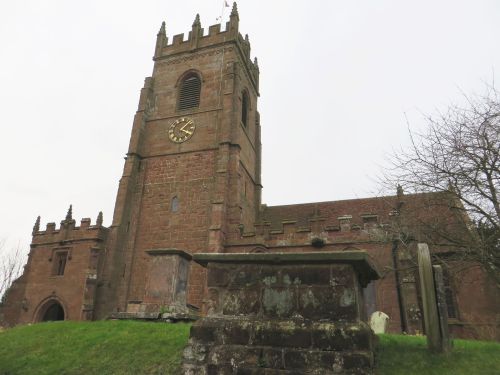 All Saints Claverley, viewed from the path up from the village

This goes back to the reign of Henry I, probably, or at least in his reign it was established as a collegiate chapel of the royal castle at Bridgnorth, which we have seen here before, some distance off. What’s visible from the outside now is largely a bit later than that… 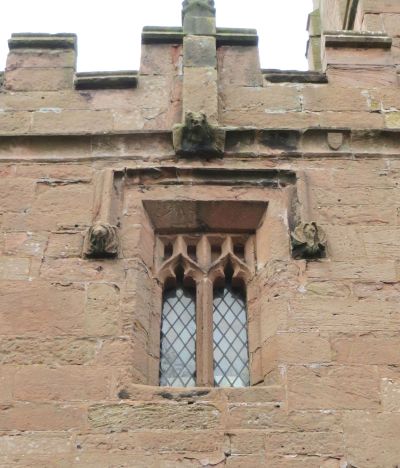 Grotesques around a late medieval window

… but inside quite a lot of at least the later Norman fabric remains, meaning not just movable bits and pieces like this… 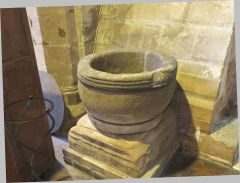 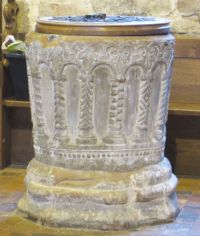 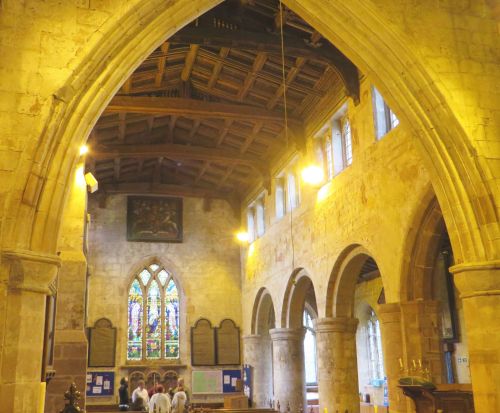 View down the nave from the east end 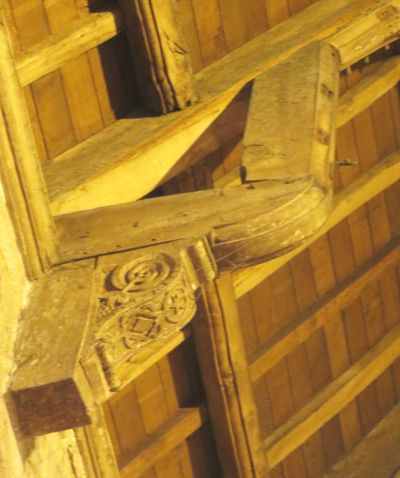 Carved joinery helping to hold up the roof 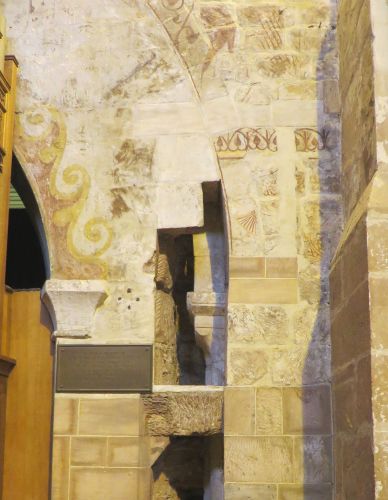 … but I confess I didn’t poke into that as deeply as I might usually have done, partly because the vicar was very kindly showing us around, being delighted to have actual medievalists interested in the church in his care, but mainly because I was blown away by the surviving decoration. 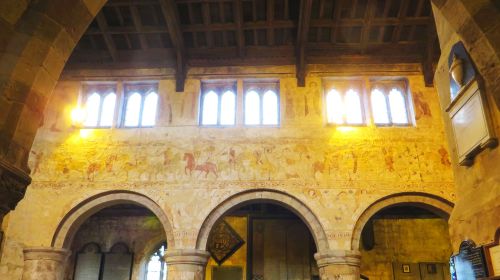 Medieval fresco along the northern arcade wall; clock through for a larger version

This fresco, which shows fifteen knights or knight-like people in various martial activities, is by far the stand-out piece of it, but there’s bits and pieces everywhere. 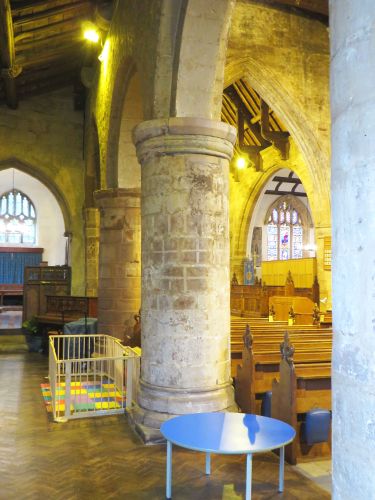 Polychrome decoration on an arcade pillar 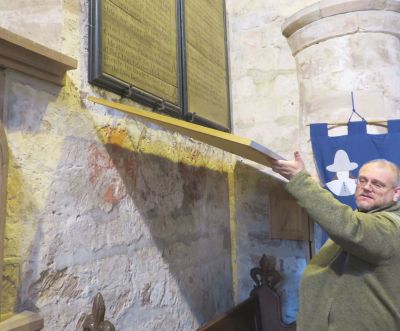 Polychrome wall art in the vestry, under a protective covering, kindly being lifted for us by the Reverend Garry Ward 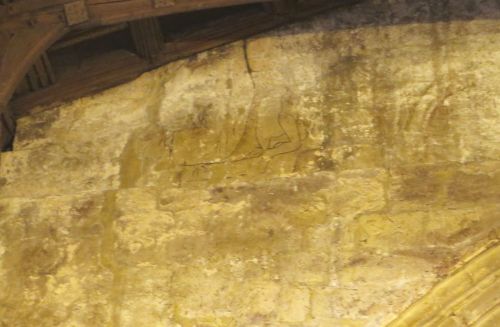 A kneeling figure in fresco in the tower

Now, give me and two Byzantinists, one an art historian proper and the other with training in that direction, a complex sequence of imagery and of course we will try to read it. We had already got a certain distance when the vicar spotted us for what we were, largely by means of the kind of logic that goes, ‘that there is a dragon so this is probably Revelation‘… 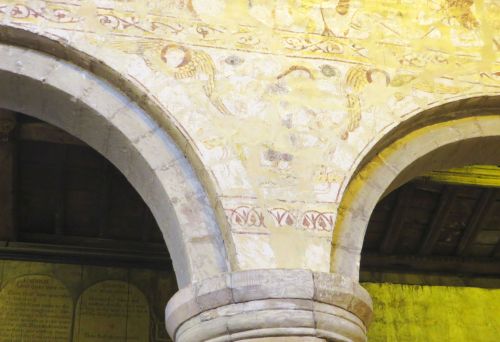 Partial fresco depiction of a knight defeating a dragon

… or similarly, ‘that there is a cross in the Hand of God and the dude above is wearing a crown’, and that led one of us (not me alas) to wonder if this was the Emperor Heraclius. 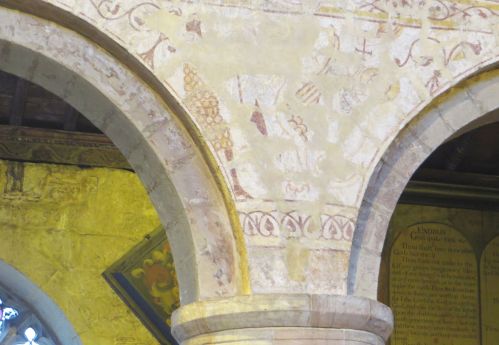 Well, several points to that Byzantinist, but it turns out a lot more points were on offer, as an article had recently been published by one Christopher Barrett trying to re-read the whole scheme and if he’s right there’s quite a lot going on here.1 Pretty much every expert who’s looked at these paintings has come up with something different, but more of it had been exposed and restored than previously when Barrett wrote, and he thinks that what we have here is a sequence of stories about the Holy Cross that tie into the Crusades and the Cross’s use as a standard in battle, starting with its growth as a tree as per the popular English poetic trope… 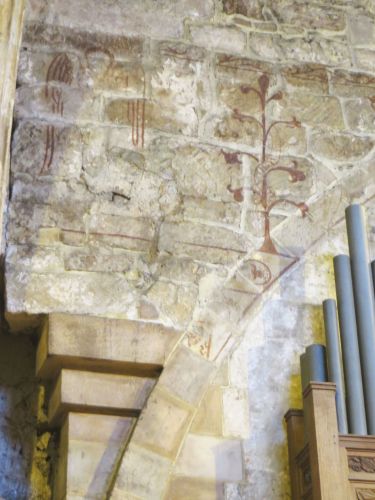 A probable depiction of the Cross Tree on the north wall

… and then running through a series of quasi-historical encounters including but not limited to Emperor Constantine I at the Milvian Bridge, Heraclius at Nineveh, Roland at Roncesvalles (which seems to me a stretch, given the distinct absence of the Holy Cross from that story, and the fact that I can’t see the horn that Barrett thinks the character is holding—I might rather see this bit as an actual Crusading battle, perhaps the Battle of Antioch) and finally the revived Charlemagne riding forth for the final battles of Revelation (including the conquering of the Beast, so I take my few paltry points for that bit). 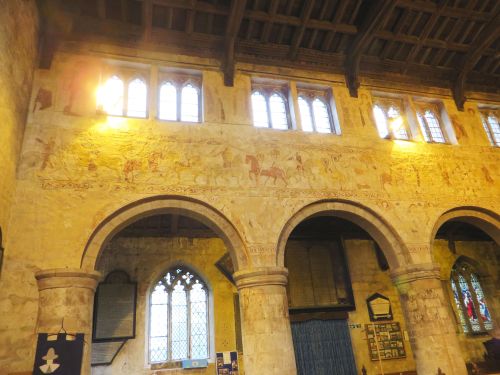 A different angle on the north wall fresco sequence

Now, some of this is being guessed at from fragments of devices that even if correctly identified might really be trying to tell us something else, but it does provide a way to make most or all of the art in the Church fit together, and Barrett argues a plausible historical context for it too, the various pledges to go on Crusade of the beleaguered Plantagenet kings of England in the first half of the thirteenth century and the specific actual going on Crusade of Earl Ranulf of Chester, during part of that period custodian of Bridgnorth Castle. 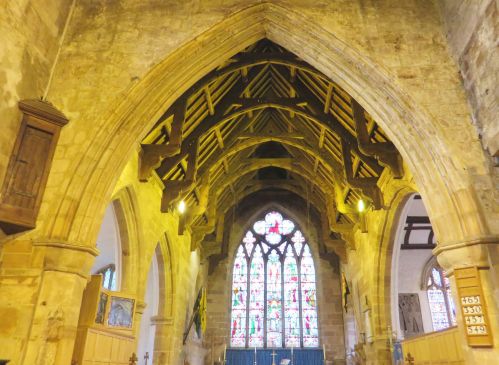 View from the west to east end of the nave

Well, it may be so; I certainly don’t have a better idea to suggest! But what I can do is very much recommend that you also have a look, if you happen to be in the area. And if you like us are overwhelmed somewhat by it, perhaps don’t do what we then did and visit the pub in England most likely to confuse and upset your senses even before you get to the beer… 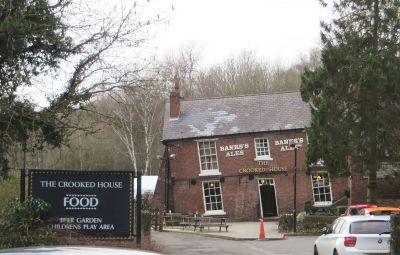 The Crooked House pub, Dudley, from safely outside; I’ve made no alteration to this photo beyond light levels!

That’s all for now but I hope for one more this week, an the fates be kind, by way of trying to catch up a bit. We shall see!

1. Christopher Barrett, “Roland and Crusade Imagery in an English Royal Chapel: early thirteenth-century wall paintings in Claverley Church, Shropshire” in Antiquaries Journal Vol. 92 (Cambridge 2012), pp. 129–168, DOI: 10.1017/S0003581512000091. This article is my source for pretty much everything I couldn’t straight away see for myself in this post.