I’m sorry, there’s been more marking, I’m not sure another explanation for the pause is necessary… As a result I continue trotting along about eleven months behind, taking me to April 2015, when I was in the town of Bridgnorth. Now, had you asked me when I was younger I’d have said there was only one reason to be in Bridgnorth other than relatives, which would have been that it is one end of the Severn Valley Railway, but over years more recent various people had spoken well of it as a place to visit and also noted that it has a castle. And being in Birmingham, as I still was then, meant that I was finally close enough to do the Severn Valley and still have some time at the Bridgnorth end to explore. But one of those people had said it was basically a ruin and the other that it was really impressive, and it seemed that both could not be right. As it happens, though, they are… 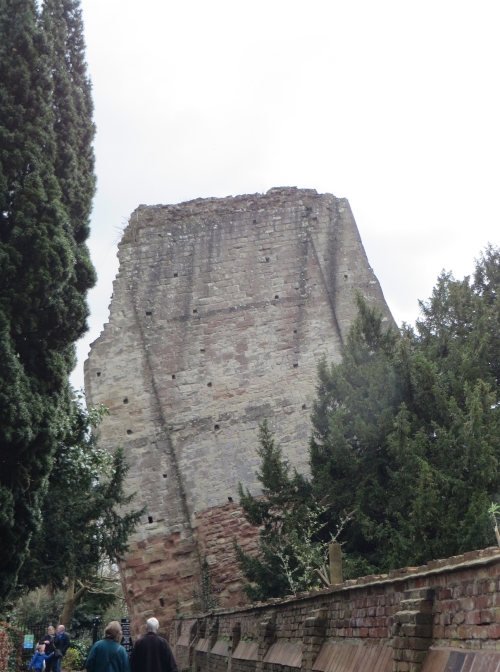 This is not the side I approached from, but it gets the effect across quite well. You are going to have to climb a good few steps to get here, though…

The direction from which you approach can make quite a difference, in fact. From some aspects it’s hardly there at all.

I should say, by the way, that this trip was the first trial of a new camera, and I’d left it set to provide a datestamp in the photos. It took me a little while to review enough photos to decide I hated that and switch it off, so many of these pictures do have numbers in the bottom right. Sorry about that.

This is more like how it first appeared to me, and helps explain how the previous views join up somewhat.

The sorry story here is regaled to one by local signage. What you are looking at above is the ruins of a square tower which apparently sat at the corner of a circuit of walls atop the hill at Bridgnorth and was put there in 1101 by one Robert de Bellême, and withstood siege by King Henry I the very next year. What we see now, however, is the result of bombardment, capture and subsequent demolition during the English Civil War, when the place was held and lost by the Royalists in 1646. This means that among other things, if you look closely enough you can see holes caused by cannonballs.

There’s just enough left from one angle to give you some sense of an interior. It would have been close, but I bet it seemed fairly impregnable until it finally wasn’t.

It seems even less safe to stand in now, mind

There are other things to see in Bridgnorth, of course, and not all of them are even trains (does a vintage funicular count as a train? They call it a railway so it probably does, doesn’t it?). The place has a good sense of its own history… 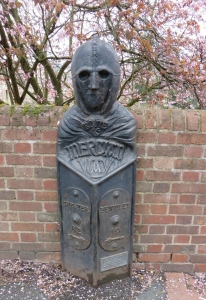 … but for general visual impact, as well as for medieval relevance, the castle is hard to beat, toppled or not.

This entry was posted in England and tagged Bridgnorth, castles, Medieval tourism pictures. Bookmark the permalink.

4 responses to “A Toppled Castle”