Towards the end of March 2016, for reasons I don’t now recall, I was back down in the West Midlands for a short trip. This is relevant to the blog because while I was there, it was determined by two of my erstwhile colleagues from the Centre of Byzantine, Ottoman and Modern Greek Studies that I hadn’t fully realised how much medieval there was kicking around the Birmingham Metropolitan Area, and so on 12th March I was taken on a trip. First of our destinations was Dudley, where of course we have already visited the Castle; but it transpired that there’s more medieval there, hiding in plain sight.

The state of the ruins of the Priory of St James, Dudley, on approach

This is what’s left of the Priory of St James, Dudley, which was built, so local signage told us, around 1150, at the behest of the then-lord of the Castle, Gervase Paganell. 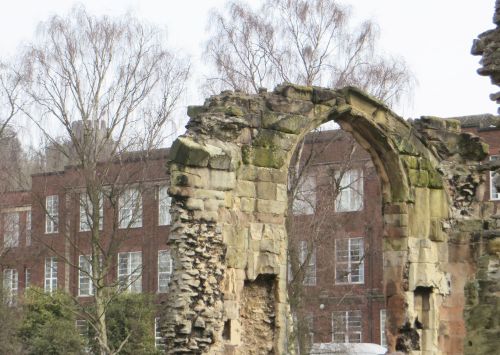 Archway into the erstwhile Lady Chapel (I think)

It was a priory, rather than an abbey, because it was affiliated to the monster fraternity of Cluny in Burgundy, which was therefore the abbey to which it was priory, but that didn’t preclude it being a reasonable size.

Visitors inspecting the ruins against a Dudley backdrop

It lasted until the Dissolution, but since then it’s suffered a bit.

Wall courses of what was apparently the chanter’s house, giving some sense of the wealth of the operation if he had a house to himself

However, in what, from the look of the site and signage, were several separate episodes of conservation, it’s now quite easily visitable even by non-experts (and for all my pretensions, I’m no expert on high medieval monastic architecture, especially compared to some of my colleagues). The modern signage gives you a building to imagine upon the still-visible footprints and wall courses, and more antiquarian-looking clues have been laid down (apparently by C. Ralegh Radford, and who could ask for a better guide?) to tell you what it is that would have been where you’re looking.

Floor tiling indicating the location of the dormitory and servants’ quarters, not as medieval as it looks

Meanwhile, a rather nice park has been set up around it.

The local setting, and some of the park facilities

There is some more genuinely medieval flooring on show, too, just a bit.

Apparently again exposed by Radford, which is I suppose how he knew what the rest should look like

I don’t really have any big points to make with this site, except that it’s there, that a nice job has been done of presenting it, and that it might serve as a reminder that before the industrial revolution’s initial reliance on water power sucked massive indigent populations into any available major English river valley, those valleys were agricultural heartlands, where an older-fashioned means of concentrating wealth, to somewhat different purposes in theory at least, also flourished. 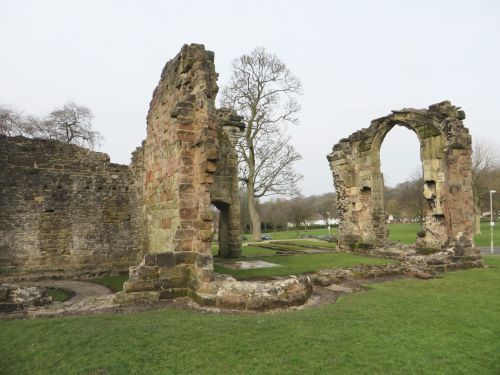 Ruins of the Lady Chapel (again, I think)

It’s worth a visit, anyway. It didn’t really prepare me for what was to come, still, but for that you’ll have to wait a couple of posts, which I will try and get done with a bit more despatch than has lately been possible!

In so far as there are any facts in here I didn’t read straight off a sign board, they’ve come from “Houses of Cluniac monks: Priory of St James of Dudley,” in J. W. Willis-Bund and William Page (edd.), A History of the County of Worcester, Volume 2 (London 1971), pp. 158-162, online here.

One response to “Dudley Priory”