Seven men in a high castle

The last of the Côte d’Azur tourist posts is also the largest and the most academic. Our final trip destination was a place called Roquebrune-Cap Martin, whither we were lured by the promise of a tenth-century castle. This was actually a very fruitful trip that was both tremendous fun and raised many questions, although it was also extremely dry. We bussed out to the town from Beaulieu, which involves passing through Monaco, all I ever wish to do there (though my companion’s view now differs). 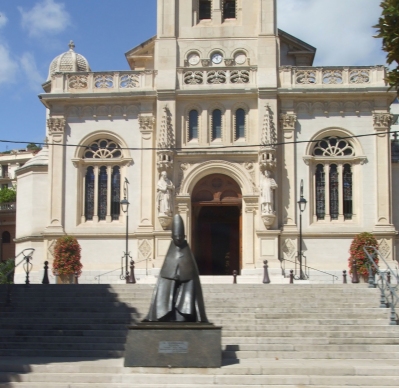 Though as we passed through Monaco I did observe that they have a metal bishop, and we know I like metal bishops

On arrival in Cap Martin, we immediately discovered a complexity in our journey plan. Cap Martin is a relatively normal town for this part of the world, and as we had found at Villefranche, it is also by far the later component of a settlement which originated where it was safer, up the hill. The uphill part is Roquebrune. But whereas at Villefranche the two more or less joined up, here there was quite a distance to transit between them.

The castle is just visible at mid-left centre; the incline is however somewhat understated…

About a quarter of a mile further up this road, we came to this telling signage.

We did not at this stage realise quite how much of a theme of this trip stairs were going to be, but for now there was a lot of climbing to be done.

The halfway point, considerately shady. We pressed on like idiots, of course.

At last we arrive in the town, though not by any means the end of the stairs

You might expect that this would end in the town, but no. There is approximately one street in Roquebrune that is not made of stairs. It’s gorgeous, but we had in no way finished climbing.

This is just an average intersection

And, actually, when we got there, the castle was shut for lunch. So on the advice of a local character (recounted in more detail by the other party on this jaunt) we detoured to see something else genuinely medieval. 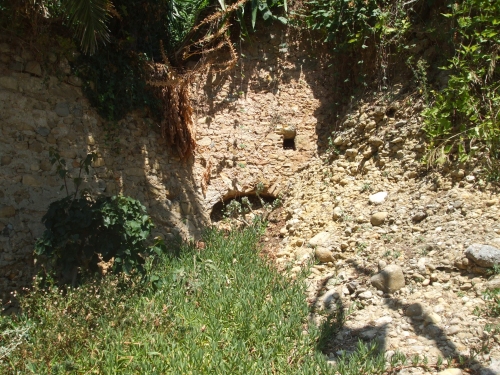 Not this (though I bet it is medieval), but… 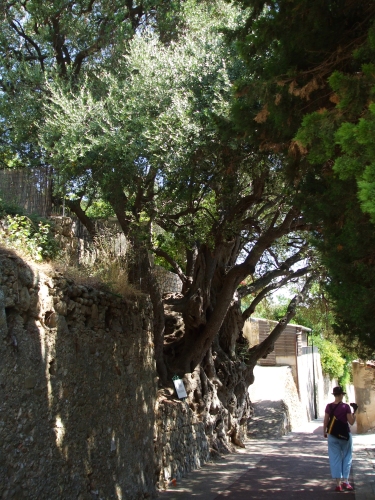 This tree is supposed to be between a thousand and two thousand years old. I doubt the latter, and apparently it was in better health even fifty years ago, before they extended the wall through its roots to help hold it up, but I feel fairly safe in guessing that it remembers the Middle Ages. That was quite impressive, but not quite by itself enough to justify the climb. This was, though. 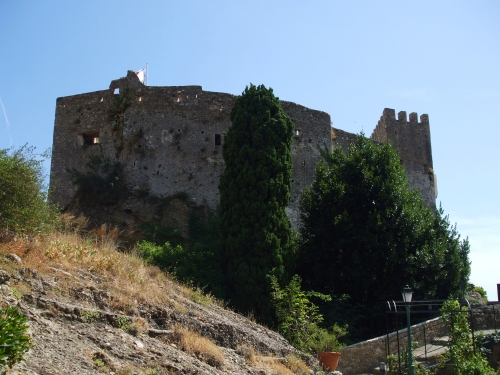 Go on: besiege that

Now, let us make things clear straight away. This may be on the site of a tenth- or at least eleventh-century castle: more on that in a moment. What you see here, however, is twelfth-century topped up with sixteenth-century rebuilding and a twentieth-century restoration, and it is rightly known as the Château des Grimaldis because it was that family of Genoese lords who were largely behind the way it now looks and used to operate. 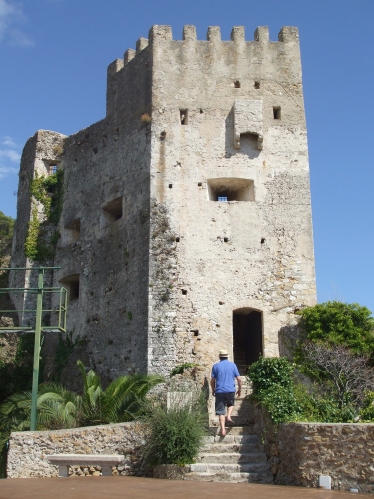 Entry to the castle is via the main tower, whose mixed fabric you can see here

Everything above the machicolation is twentieth-century work, so don’t rely on the crenellations, sorry

… and back again from the second one

OK, so, there are three questions I principally wound up with here, some of which the signage was able to offer answers to but not all. Firstly, what was this castle for? Secondly, why do they say it’s tenth-century? Thirdly, how was it used?

The main tower and courtyard viewed from the Roundwalk. The central area was turned into a banqueting chamber by one of the later Grimaldis, who put a vaulted roof up over it whose traces are just visible in the stonework of the tower. The light was very bright, so please forgive the high contrast

The third is easiest to answer, but it has further implications. The arrangements are best known for the sixteenth century.1 At that point, though sometimes one of the Grimaldis would be here, holding relatively small banquets under that now-fallen roof, the standard garrison was a castellan and six archers, only.

The castellan’s chamber (not accessible)

The castle armoury, with two silver silhouette Savoyards going over their weapons. There isn’t that much space…

The barrack-room, with two more silver ghosts, brought out of the background by the flash

And actually, although there’s four stories to this castle and it’s fairly well kitted out, it’s hard to see how more people than that could live in it for any long period of time. This is that thing we so rarely see in preservation, a small (which is to say, normal) castle. And it has been very well preserved, it must be said. There is limited but informative signage about almost everything and navigation through what is quite a confusing building is easy to learn.

Passageway down into the central courtyard from the main chamber

So, OK, now the first question, what’s it for? Well, by the time of the Grimaldis I think it’s fairly safe to say that its main purpose was to menace the village: if the view itself didn’t make this clear, the directions of the artillery ports would do. 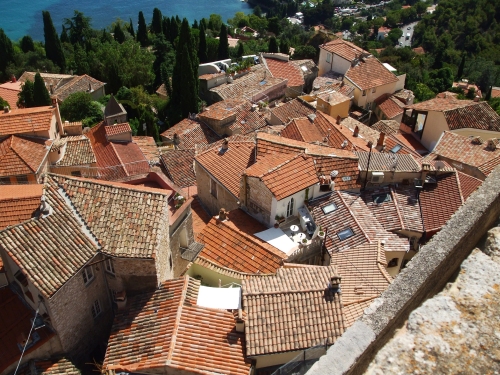 View down onto the village, giving some impression of why the streets are all stepped…

View onto village buildings through one of the many murder-holes

But it also obviously watches the sea, and perhaps that was why someone originally built a fortress up here, though this leads into the obvious chicken-egg incastellamento debate over whether the village or the castle came first.2

View eastwards along the coast, over the village

Answering that took some time, and I haven’t got more than a guess even now. The signage said that the castle was put here by the tenth-century Count Corrado I of Ventimiglia, but that the village wound up before too long being given to the Frankish monastery of Lérins and being granted by them in fief to various castellan lineages, culminating in the Grimaldis, by which stage it had more or less lost is connection to the monastery. The town website gives a date of 970 for the foundation, as if this was a certain thing, and Wikipédia currently claims it as “le donjon… le plus vieux de France” but then admits, “réf. nécessaire“. Now, I later spent some time digging for that reference, expecting it to be an easy search of the Lérins cartulary. And in fact, most of the parts one could make such a story out of are there. There was a castle of Rocabruna by 1030 or so; it was with the monastery by 1124; the counts of Ventimiglia gave property to the monastery in 954 and 1064.3 But Count Corrado I is not here, the property that the counts gave doesn’t include Roquebrune and there’s no sign that they owned it. It could very easily be that the castle signage is based on unpublished material: there is a municipal archive down in Cap Martin that claims to have material from Lérins, there’s no reason why all the Lérins documentation would have to have made it to the cartulary or even to their central archive, and I can’t find any publication of this site nor much mention of it in work on the Grimaldi, though I admit I didn’t try very hard, so they obviously have some information that’s not generally out there. On the other hand it could be that someone has thought that the castle is documented in 1030 so must have been there earlier, that it winds up with Lérins and the local comital family of donors thither have a member of the right period who is first documented around 970, and then put the pieces of the jigsaw together and pretended they fit, as we saw here a while back with the mint of Launceston. Without going and hunting in the archive, I won’t know, and it’s hard to make that a research priority even though it is, you know, arguably a tenth-century border fortification in a zone threatened by the Muslims. 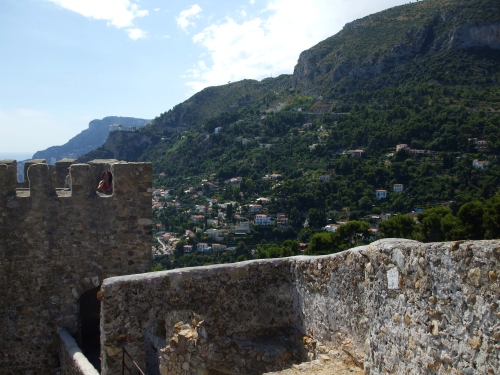 The hillside beyond the castle to the north-west

All the same it got me thinking; I’m not sure I realised how much it got me thinking till rather later. This is not a big castle, but it’s bigger than most of my tenth-century ones. You couldn’t fit this building onto the platform at Gurb, for example. Yet Gurb is supposed to have been a lordly seat.4 That lord would have had to have a very small retinue, then. Could the maybe four or five armed men who could have lived up there been enough of a force to menace a village, let alone the visible-but-distant city of Vic? It suddenly seemed doubtful. And my doubts grew as I escaped from my Oxford funk, but that’s getting ahead of myself. I leave it till later, but I think it may have started here. And if you need a justification for a holiday on the Côte d’Azur some time, ‘it gave me the idea for one of my better articles’ is a pretty good one I think!

1. I’m relying here entirely on the signage: the best documentation they had to offer was a scanty leaflet with no references that contained less information than the signage did. See my speculations below about where that was all coming from…

2. Henri Moris & Edmond Blanc (edd.), Cartulaire de l’Abbaye de Lérins (Paris 1883-1905), 2 vols, apparently each presenting different cartularies. I no. CCXL shows a castle at Rocabruna in existence with a territory circa 1030; I no. CCXCIV shows the church of the castle confirmed as Lérins’s property by Pope Honorius II in 1124. In 954 Count Guy of Ventimiglia gave Lérins quite a lot of property which the brother Counts Otho and Corrado II confirmed in 1064 (II doc. nos CXII & CXIII).

3 responses to “Seven men in a high castle”