Piled-up Pasts in Ankara I

This week we leap forward in my past to February 2018 when, somewhat unexpectedly you may think, I was in Ankara. Actually the reasons for this have been piling up in our narrative: firstly the post held by my good friend Luca Zavagno at Bilkent Universitesi there; secondly the grant we got together; and thirdly, reported here only implicitly, our not managing despite our best efforts to spend as anticipated on the workshop and seminars we had run from that grant in Leeds. The result of this was that what had originally been supposed to be a small seminar at Bilkent to round off the project became a full-blown international conference, which Luca gleefully organised. The programme of events ran over several days, took quite a lot of shuffling of my teaching timetable and involved two public lectures as well as the actual conference, which I will report on, but next post. But in between those two phases we got to have a good look around Ankara with local guidance, and so of course there are photographs.

The city spread out below the castle, or at least one direction of the city

Now, Ankara is probably known to most people now only because since 1922 it has been the capital of Turkey, but it has been going for quite a long time. There are Hittite remains, even. To Classicists it is important because its Temple of Augustus preserves one of the fullest texts of Emperor Augustus’s Res Gestae, a monumental declaration of all the conquests he had made and honours he had received, as well as many which he refused, and when he had that put up here the city was a long way from new.

Surviving exterior wall of the Temple of Augustus and Rome, on the lower level of which is supposed to be the Greek version of Augustus’s declaration though I have to say, I have never been sure I can see it

The so-called Column of Julian

But the principal surviving bits here are Byzantine and Ottoman, the former because the Byzantines substantially rebuilt the place as a frontier bulwark against Islam in the ninth century, demolishing quite a lot of what had stood before, and the latter of course because of the five or six centuries of post-Byzantine occupation under Ottoman Islam.1 Nonetheless, it wasn’t an especially important town in those periods, a regional capital but no more, and that may have preserved its surviving features, because for most of the Ottoman period it just wasn’t worth sinking serious money into redevelopment. So there still stands a substantially Byzantine citadel and several quite early mosques, of the Seljuk period onwards, and the citadel and one of the mosques were the star attractions of this tour.

The walk up to the castle entrance as it now is

Because of how the castle sits in the city, and because of its considerable size, it’s hard to give an adequate visual impression of its whole. You just have to kind of circle round the exterior walls, which were once the middle set of three, and take in the general impression that it would do to keep people out.2

Obviously, the Byzantine and Ottoman version didn’t feature the clock tower. But it has always been a bit of a bodge, it seems…

For a start, you can see that this gateway was bigger once upon a time; it was in fact shrunk to this size in 1330.

The Şarc Kale, closer up, betraying the patchwork quality of the stonework, shortly to be explained…

Now we are climbing up the inside of the inner wall circuit, having gained access by that gateway above, the Hisar Kapı, and another I’ll show you in a minute. Keep calm, there’s a plan to my exposition, honest.

And when you’ve done that, getting to this high point reveals that, wait, this wasn’t even very much of the circuit as it once was… 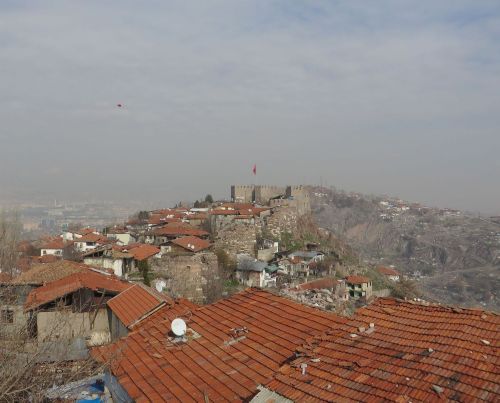 View from the Şarc Kale to the Ak Kale, across the valley between the two, with a row of fierce-looking pentagonal towers making the join

But we were touring the counterfort, the Şarc Kale. (I don’t know if the other citadel, the Ak Kale, is accessible, or how much of the rest of what lies between, but at the time of writing I certainly haven’t accessed it.) And the first impression I got of it, really, other than sheer solidity, was the fact that really any old stone going had been used to build it.

Roman tombstones in the exterior wall 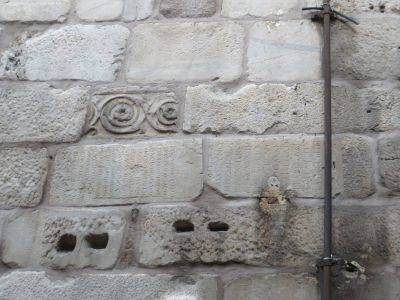 Reused masonry in the walls of the Şarc Kale

To get here, you have now to enter via the gateway I already showed you, the Hisar Kapı, which is some way before the actual entry to the citadel; you would potentially be under fire for quite a while before you reached it if someone didn’t want you there.

Outside the inner portals of the İç Kale; we take the right, running round the inner face of the Şarc Kale 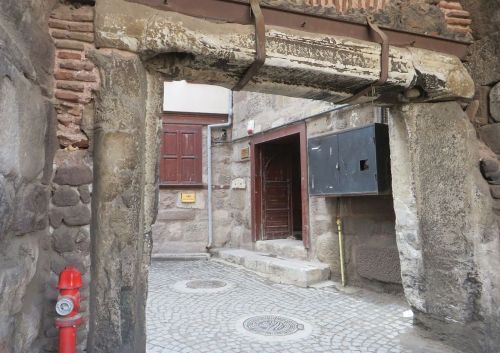 On the inner side of the same portal, the Parmak Kapı, but still outside the wall of the Şarc Kale. With me still?

Then, you turn right again onto the stairwell I already showed above, and that, finally, takes you to the gateway into the Şarc Kale. Once inside, there is a central courtyard space, and easy access onto the walls round it for the defenders (or visitors).

The courtyard viewed from above, on the wall

View across the courtyard from the point in the previous photo. Guess where the sun was…

There are all kinds of little chambers set off this whose purpose is now lost, at least to the casual enquirer.

This, at least, was presumably an arrow slit, but wasn’t the hole in the reused stone a problem? 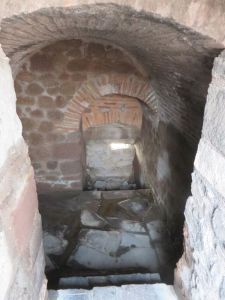 I’m less sure about this one but it could be a guard chamber, set within the wall

And there is also a kind of causeway out onto a kind of advanced fighting platform. You have no photo of this because there is really nothing to stop one falling off the causeway at all, no railings, nothing. It’s broad enough for two people to pass each other very carefully, but there was no way I was going to risk it. So I got carefully down from there, and made our way outside and I believe we all sat down to eat something and thus I was able to bring my heartrate down as near to normal as Turkish coffee will allow. And just by the site, there is this mosque.

Exterior elevation from the most vertiginous angle, since I couldn’t get it all in shot from any other

The Arslanhane Camisi is not the oldest mosque in Ankara, which is twelfth-century whereas this one is only thirteenth-century (details, I admit, that I learn from Wikipedia), and in places on the outside where it’s had to be maintained it looks rather newer than that. 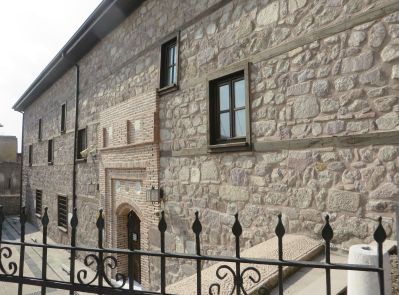 The actual entry, at least for visitors, and a fairly modern wall facing

But you can’t make that mistake once you’re in it, because unlike the later domed ones of which we saw so much from Istanbul, this one’s roof is held up by venerable wooden columns.

Wooden columns, with notable medievalists dotted between them

View down the left-hand side, looking back towards the entrance

In fact the interior is mainly wood, but the Seljuks were not above a bit of spoliation either, and let’s face it, we’ve already seen that reused stonework was a venerable local practice anyway.

Why yes that is a Roman capital between the roof and this wooden column, why do you ask?

I should probably have some deeper point to make here than ‘this is the oldest mosque I’ve ever been in, it has a cool wooden roof partly held up by Roman column capitals and I liked it’ but I don’t, really. Subsequent trips to Ankara have broadened my sense of the city’s past a bit, too, but those photos will come some other time. Meanwhile, I hope you have enjoyed these ones!

2. For the castle I would have been a bit lost without Julian Bennett, “‘The Powerful and Fortified Ancyra'” in Bilkent University Archaeology Department Newsletter no. 1 (Ankara 2002), pp. 28–32, online here. There is local signage, which I’m sure is fine in Turkish but in English starts paragraphs with phrases like, “The castle have witnessed some periods,” and takes few prisoners to lack of historical knowledge thereafter. It certainly doesn’t help you work out which bit of the building you’re standing in…

3 responses to “Piled-up Pasts in Ankara I”