Sorry for the absence: despite working to contract at the moment, it turns out life fills up blogging time with work for other people sometimes. In order to get something out for the Bank Holiday weekend, however, here is a short photo post about a trip I made in February 2019 to Carlisle, which found some unexpected things. Now I know I just mentioned Carlisle in the context of domestic quadrupeds, but this was nothing to do with that; rather, it was that an organisation local to me had just got this going again…

… and were willing to charge an only-slightly-eyewatering amount to take me and a few hundred others up the Settle and Carlisle line on it, so I did that, which left me with two hours in Carlisle, into whose historic centre I’d never previously been. 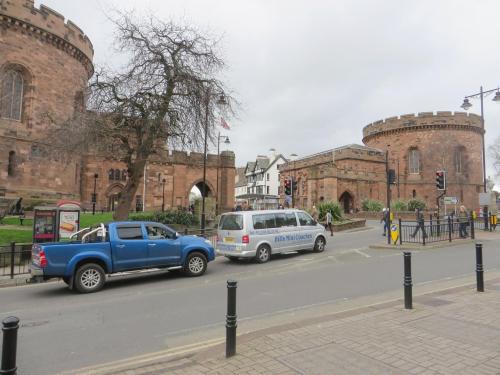 This is the view presented to the visitor on arrival from the railway station, the Citadel, built in the 1540s says Wikipedia (though this is my image)

Now Carlisle has for much of its history been a town whose primary business is war, either the carrying out of or the standing out against. It began as a Roman outpost against the Caledonii and then became a redoubt of the English against the Scots, though not always a very successful one, being taken a number of times. And every time that happened, as you can see from the above, the English built back bigger. 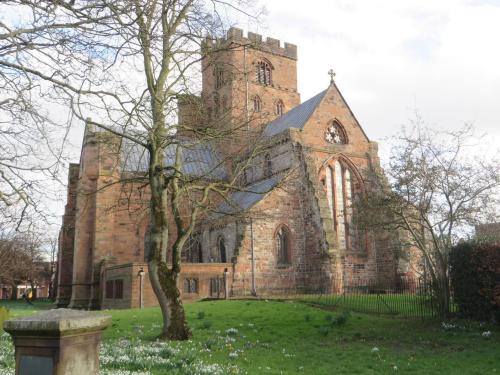 Now, with only two hours, I had to choose pretty carefully, on the basis of next to no knowledge. So although I passed by the cathedral I didn’t go in, because it looked too modern to me; turns out it’s actually fourteenth-century on a twelfth-century site, so don’t go trusting me on things.

Attracted by the dedication, I actually did snoop around the actually-newer St Cuthbert’s for a few minutes, but it became clear from signage that it was in fact newer, even if probably the older church location, and also it was shut. So onwards onwards…

The blue plaque on this building reveals it to be, in some part, a 15th-century tithe barn that now functions as St Cuthbert’s church hall, but as you can see quite a lot had to be done to it more recently to make that possible

View of Carlisle Castle from right over the ring road

… until I came to the north end of the city and the castle. Now, the castle is quite considerable, but it is also largely brick, so I wasn’t at all sure about its medieval credentials. I got as far as the gateway, but there discovered that the ticket got you into a regimental museum. Now, I don’t mind a regimental museum here and there, and indeed on a subsequent trip I did go round the castle properly which is why I’m not giving you any further photos of it here, but on this occasion I did wonder if it was the best use of my time, especially given that it didn’t seem I’d have time to look round properly. And in any case, from the bridge across the ring road one can see an alternative in the form of the Tullie House Museum. 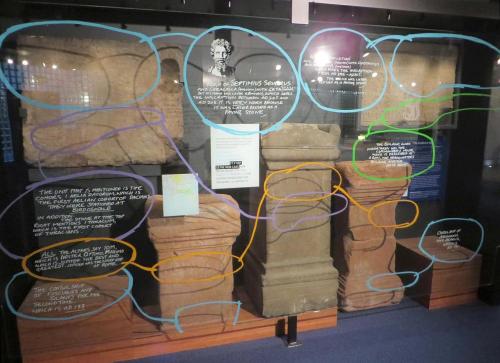 Roman altars, behind annotated glass, in the museum

Now, I remembered Tullie House from blogging of yore, when a Roman cavalry parade helmet had come up somewhere nearby and Tullie House had tried to buy it but been outbid, because the helmet was bronze and so didn’t count as ‘treasure’ under UK antiquities law so could not be held in the country. That law was changed because of the episode, and the helmet has subsequently been loaned to the museum by its owner and a replica made for permanent display, but still. So I thought it might be worth seeing what else they had, and if it wasn’t much, well that was roughly how much time I had anyway. So therein I went.

A Roman coin hoard on display

The thing for which the Tullie House Museum really stands out is indeed Roman stuff, though their early modern collections are also impressive and there was a really good display about living through a siege in the city in 1644 which falls outside our sphere of interest here (and may now be closed, as I can’t see it listed on their website). But it wasn’t just the collections which stood out for me bit also the imagination with which they’d been displayed, making obscure material interesting even to novices very easily and accessibly.

Some of it is even out to make some quite deep, if simple, points… 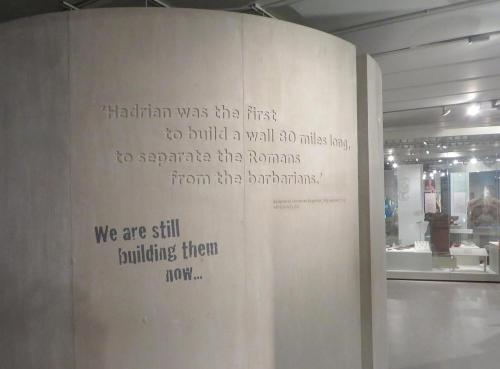 Speaks for itself really

But, despite that connection to my research interests, there wasn’t a lot of medieval on offer, for all that the city was, you know, there between Roman and early modern periods, and may even have been one of very few places with a continuous Church presence through those transitions.1 And then I got to the special exhibition gallery and found it full of early medieval burial items, in what is now a permanent exhibition. 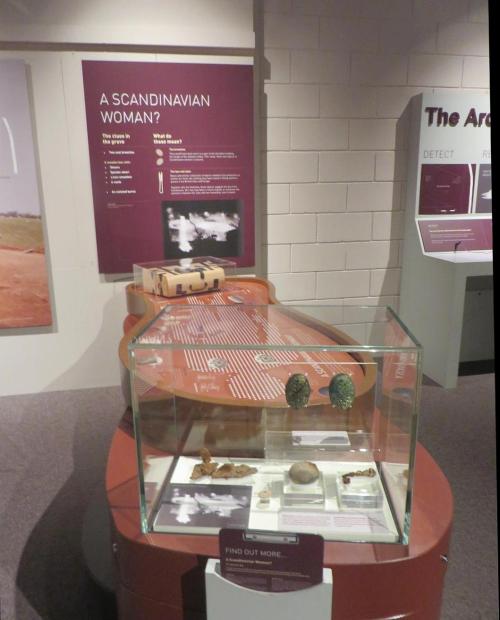 One of the exhibition ‘units’, a mirror of the grave-shape with the positions of objects marked and labelled with interpretation, and some of the actual objects at its foot, including a lock from a box and its matching key

Now, as you know, over the time I’ve been writing this blog my views on the display of the dead have shifted so in this instance maybe it’s as well that the bodies did not survive to be excavated – the soil is apparently acidic enough to do for anything organic.2 The unfortunates in question had come from a cemetery at Cumwhitton, which was apparently a Viking one, by which we apparently mean the occupants were put in the ground with metalwork of ninth- to tenth-century Scandinavian style. 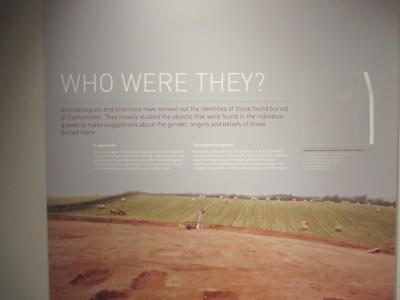 Interpretation board, making it clear that stylistic analysis is what we have to go on here; larger version linked through

This is actually something of a big deal. Even though there were only six graves, they were all quite richly furnished, and definitely associated, and that makes this only the second cemetery ever discovered in England that can be considered somewhere where Vikings (or people using Viking-looking kit, anyway) put other Vikings (or… you get the idea), as opposed to places their enemies put them. And furnished graves means grave goods and in this instance grave goods meant, among other things, a sword.

It was obviously once a pretty serious example, but I was more detained by a peculiar thing that looked like a trident and has questions still to answer. 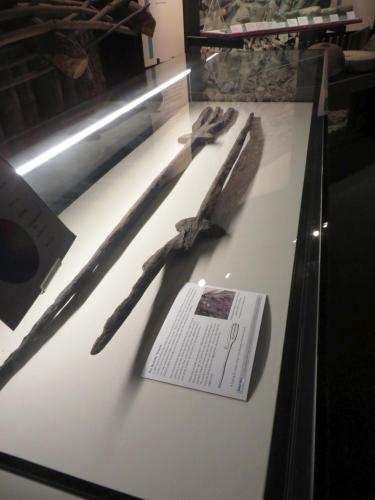 The other thing probably isn’t a plough coulter either, but it certainly looks like one like this even if it may actually be a set of tongs

Some of the metal was dress fittings, of course…

… and some was other stuff (including bits of a second sword)… 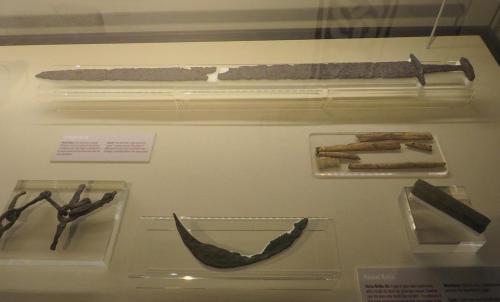 … all of which specialists in Viking metal could definitely do something with. I am not that specialist, and I haven’t made time to read the site report; and worse, I didn’t have much time to take anything in when I visited and I’m now trying to remember it three years later, so I’m just not going to risk further details.3 But while I may not be able to remember much of what was exhibited and why, the way it was displayed was exciting and informative at the same time. There was more going on there overall than I could pick up in my lightning visit, but it was quite enough to decide that Tullie House was one of the better done Stadtmuseen of the country and to recommend it thoroughly to visitors. It’s worth more than an hour, that’s for sure!

1. I got that notion from Martha R. McCarthy, “Thomas, Chadwick and Post-Roman Carlisle” in Susan M. Pearce (ed.), The Early Church in Western Britain and Ireland: Studies Presented to C. A. Ralegh Radford Arising from a Conference Organised in His Honour by the Devon Archaeological Society and Exeter City Museum, British Archaeological Reports (British Series) 102 (Oxford 1982), pp. 241–256, but now there is also John Zant, The Carlisle Millennium Project, Lancaster Imprints 14, 3 vols (Oxford 2009), where volume I would probably bring the casual enquirer up to date on the matter.

2. I get the details here from Adam Parsons and Rachel North, “Buried Vikings: Excavating Cumwhitton’s Cemetery” in Current Archaeology no. 294 (8 September 2014), online here and linked above.

2 responses to “Dead Vikings in Carlisle”