At the very beginning of the period covered by the last post, April 2017, I had a relative visiting and so decided to do one of the obvious bits of Yorkshire touristing I had not yet done, which is to say the city of York itself and more importantly its minster.1 York, of course, has quite a lot more history piled up in it than just the minster…

The Roman Multangular Tower on York’s Roman wall, adorned by members of the local youth community. I guess if you grow up here Roman architecture is just normal and dull?

… but for an iconic location for your trip—assuming you are in a version of our world where tourism is again possible—it’s hard to beat.

View of York Minster from the 2nd floor of Marks & Spencer building, by MatzeTrier – own work, licensed under CC BY-SA 3.0, via Wikimedia Commons

The Minster is famously fantastic, but also quite difficult to photograph from the ground because of how close other buildings come to it, which is why the above photographer only got it by standing high in a shop, a strategem I didn’t think of. So I have no exterior shots, meaning that things like this just kind of loom out of my photo archive without much context. 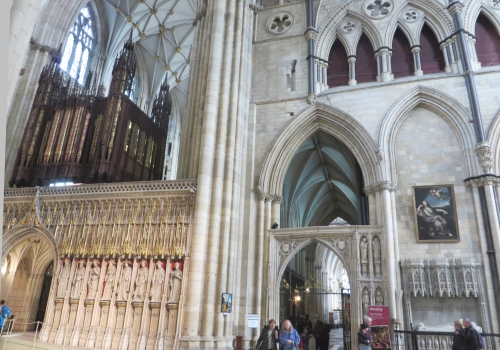 Combination of architectures at the east end of the nave

I’m not sure exactly how much context you’d have to have to parse that architecture, really. The thing is, if your memory is UK-based and goes back as far as mine but not much further, I’m betting the first time you heard of York Minster was when it caught fire in what turns out to have been 1984, when I was quite young. I didn’t then learn much about the building or site but I do remember Blue Peter programmes about the restoration of the roof and the famous rose window, in which I learnt what a boss really was. I have to say that restoration was looking good when we went, not least, Wikipedia tells me, because it had only just been renovated again. 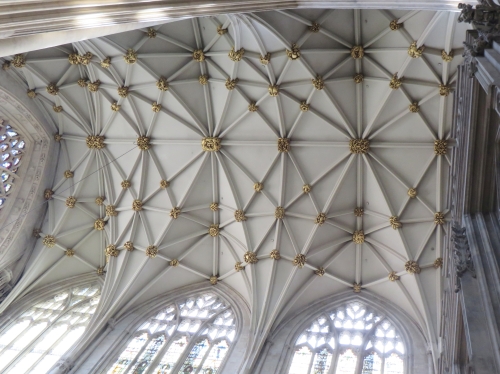 Renovated roof vaulting and bosses in the nave

The famous rose window in the east end

Now, as you know from this series, I like a good Romanesque or even Gothic cathedral as much as anyone, and this one has much to recommend it… 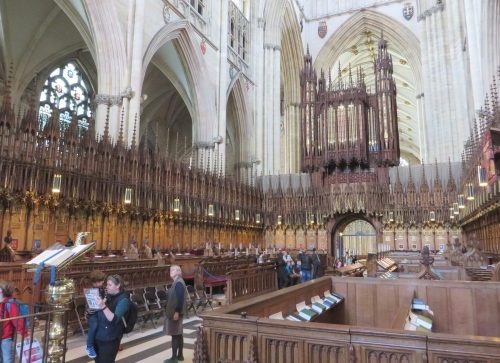 Interior of the choir

View down the nave roof from the central tower

View down on the westwork from the top of the central tower, a good test of my vertigo control

… but as with many such a site, it is often what is below that really interests me. This is because, as we’ve seen already, York was a Roman city…

… which then became home to Anglian and Scandinavian cultures, was then fought over for a century or two by the Scandinavians and the West Saxons, and finally just when the West Saxons had got it safely in hand and sending bishops up north to harange people…

The York Gospels, open this day on Matthew Chapter 9. This is not a manuscript of the Sermon of the Wolf, as I might have hoped, but it probably is a manuscript from which ‘the Wolf’ preached

… along came the Normans and built this cathedral on top of it all. But from a twenty-first century perspective, what this means is that the range of ‘stuff we dig up while fixing the place’ covers pretty much that whole transition.

Ulf’s Horn, an ivory horn carved in Salerno and given to the cathedral by its eponymous donor

The view afforded to a medievalist skulking in the crypt

… but at least reminders were present that one can go too far down if one is not just thankful for what one has!

Sculpture showing the mouth of Hell, from what object I sadly didn’t record

1. I had, I should say, often been to York before, but always for academic or social reasons that didn’t leave much room for tourism. Even now I think I’ve only been to three of the city’s museums, and they have quite a lot. Further explorations may some day be possible… In the meantime, this site is quite a good survey of the history of the Minster and how it got the way it is.

7 responses to “Taking in York Minster”