What if Widukind was wrong about warfare?

I feel a little bad about returning to David Bachrach’s book Warfare in Tenth-Century Germany with my claws still out after his generous and lengthy responses to my previous critiques. I’m going to do it anyway, of course, but I feel it more necessary than usual to stress to the readership that I use this blog primarily as a platform on which to look clever, and that someone else’s work gives me the chance to do so is not necessarily an indictment of it. Indeed, the first two substantive chapters of Professor Bachrach’s book are possibly the clearest narrative of the politics of the Ottonian realm under Henry I (919-936) and Otto I (936-973) that I’ve read anywhere, militarily-focused or otherwise, and the whole book does the English-reading population of historically-minded people a favour by making the Ottonians more available to us.1 But every year I have a fresh cohort of first-year students who don’t really understand what I mean by critical use of primary sources, and those same first two chapters provide me with some really good object examples. 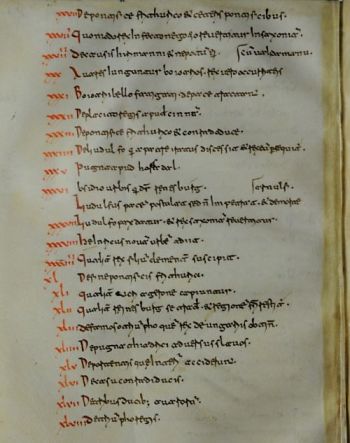 The crucial source for much of what Professor Bachrach sets out is the so-called Sachsengeschichte of Widukind of Corvey, written up in 968 and then edited after Otto I’s death in 973, and very lately translated into English by none other than the well-known firm of Bachrach & Bachrach, indeed.2 Widukind was a monk but seems to have been unusually interested in military campaigns, so the first object lesson for my notional students: just because someone is religiously-inclined does not prevent them having good information on secular matters! You have to go further than that and establish, if you can, what bees this particular author has in his or her bonnet about such things. Now, as I say, Widukind is very often the key testimony for Professor Bachrach’s account but the trouble is that sometimes he is flatly contradicted by other sources. Let’s work through an example.

I’m not sure how much of Regensburg’s medieval walls are left but here is some Roman work that obviously must still have been there at the time we’re writing about… Image by Lance Longwell and (c) Travel Addicts – 2014.  Used with permission

Even by 921 King Henry I was not accepted by all his German subjects, and one particular hold-out was the duchy of Bavaria, then under one Arnulf. Henry had hitherto been occupied trying to arrange peace on his western borders but with that done was able to turn his attention to Bavaria, where Widukind tells us he laid siege to Arnulf at Regensburg and that Arnulf, realising the game was up, surrendered and terms were reached.3 Well, so far so good, but this is only one version of events. The Italian diplomat, gossip-monger and courtier of Otto I, Liudprand of Cremona, writing in the period 958-962, instead records that Henry and Arnulf met with armies on the battlefield but concluded the truce there rather than fight.4 And if that weren’t enough, another text records that Henry invaded Bavaria but was driven out by the forces of an unnamed city, with terms being reached after that.5 Now, I have all these references from Professor Bachrach himself who diligently records them in a footnote, but what he doesn’t give is any reason why we should accept Widukind’s version over the other two. One might meanly suspect that it is because Widukind alone mentions a siege and Professor Bachrach has hung his historiographical hat on the importance of sieges in the warfare of the period, as we have seen.6 I’m sure it is in fact otherwise, but what could we do instead?

There are several ways this could be resolved, although none of them are conclusive. I think that the anonymous Fragmentum de Arnulfo duce Bavarie can probably be ignored; its purpose was to glorify Arnulf, so it had no interest in recording his defeat, but more importantly its version offers no explanation for Arnulf actually making terms, which he evidently did as Henry went away and Arnulf was willing to fight alongside him on the eastern frontier in later years.7 Liudprand is harder to dismiss, however; he was writing earlier than Widukind and with access to Otto I’s court and anyone there who might have had memories of these campaigns, and his obvious interest in praising the Ottonians (as compared to his previous employer, King Berengar II of Italy) still didn’t lead him to give Henry a decisive victory as did Widukind.8 In some senses both are telling the same essential story: Henry brought an army and Arnulf decided it wasn’t worth fighting. The difference is that Liudprand thought that was best set in the field and Widukind saw it at the city walls, and at least implies the fighting which Liudprand denies. We don’t know why but it is possible that Widukind was making a literary choice, in which case Professor Bachrach has a problem to deal with.

Reconstruction drawing of the Slavic fortress at Brandenburg

Can we get any other angles on Widukind’s historiographical preferences? Yes, we can. In 928 Henry I was busy dealing with the various Slav groups on his eastern border. First among these, because they had raided his territory a few years before and because they stood in the way of any major campaign in the middle Elbe region, were a group called the Hevelli who were centred at what is now Brandenburg, where they had a fortress.9 Professor Bachrach’s account is clear and concise, so let’s use that:

“Widukind, who is our best source for this war, makes clear that Henry’s campaign against the Hevelli involved several subsidiary military operations before the urbs at Brandenburg itself was captured. He stressed that the German forces wore out the Slavs in numerous battles (multis preliis fatigans) over a lengthy period.93 It was only after he had sufficiently isolated Brandenburg that Henry deployed his army in a close siege of the fortress. Widukind draws attention to the fact that by the time Henry actually began direct operations against the Hevelli princely seat, the coldest part of the winter had arrived. As a result, the army was forced to camp on ice (castris super glaciem positis).94 Ultimately, Henry captured Brandenburg by storm, after besieging the stronghold for some time.95”
…
“93 Widukind, Res gestae, I.35.
“94 Widukind, Res gestae, I.35. In describing the siege and capture of Brandenburg, Widukind alludes to Cicero’s speech against Lucius Calpurnius Piso. Cicero, In Pisonem, 17 reads, “exercitus nostri interitus ferro, fame, frigore, pestilentia.” Here, Cicero was listing the causes for the casualties suffered by Piso’s troops when he served as governor of Macedonia. Widukind paraphrases here listing only hunger, arms (literally iron), and cold as the causes for the casualties suffered by the defenders of Brandenburg.
“95 Widukind, Res gestae, I.35.”

There’s quite a lot that can be read between the lines here, it seems to me. One is Henry’s determination in pursuing the campaign, which may well be what Widukind wanted to illustrate: the king presumably hadn’t meant to be campaigning still in the dead of winter, which would have been nearly as difficult for his troops as for the defenders and was an occasional cause of mutiny in the Byzantine world.10 It looks rather as if siege was his last resort after trying to beat the enemy decisively in the field had failed several times. Even then, he seems to have waited before risking an assault. Presumably at each stage he hoped for a surrender that the Hevelli weren’t willing to offer. That, at least, seems as fair a reading as one that makes it all strategic wearing down of the enemy; who would have planned to make their army camp on ice? (Though that does suggest that perhaps the fortress was unreachable previously because of surrounding water—as indeed above though the Ottonian forces presumably didn’t camp on the moat—in which case Henry probably didn’t start out meaning to besiege it.)

But you saw the footnote, right? Object lesson number two for the notional students: always glance at the footnotes. Perhaps more important than the campaign’s duration is the unexpected presence of this guy in the text, this of course being Marcus Tullius Cicero, Roman orator and politican of the first century B. C., and with him arrives a possibility unsettling for someone wanting to read Widukind straight here, to wit that he had a written model in mind for how this situation should be described that was nothing to do with what had happened. For most history undergraduates in the UK I guess that this methodological problem is first opened up to them when briefly studying Charlemagne, because they will be set to read Einhard’s Life of Charles and if their teacher’s any good, will then be faced with the fact that Einhard borrowed almost all of his description of Charlemagne from Suetonius’s Twelve Cæsars, in order to make Charlemagne truly the image of his Roman imperial predecessors.11

The good ones will then work out, of course, that if Einhard was picking descriptions from twelve different emperors to describe one, the best reason for him to select the bits he did was probably because they actually fitted Charlemagne—it’s like my bit about formulae mentioning dovecotes in charters, most probably used because the property in question actually had a dovecote. Maybe the same thing was happening here, so that Widukind had a historical story to tell and saw how perfectly the Cicero quote could fit it. We can hope so, especially since there seems to be no other lifting from Cicero in the story. But one does have at least to think about it. Now, I’m sure that Professor Bachrach has thought about all these questions, for the very simple reason that he’s put the evidence that provokes them in his own footnotes! But I wish he’d had space also to explain how he resolved them in favour of Widukind’s accuracy each time.

6. Thus also ibid. p. 22 where Adalbert of Magdeburg, who describes a siege at Metz in 923, is preferred over Flodoard of Reims who describes a different sort of campaign by the German king. They both make it look as if their preferred king won, of course, and maybe there’s something going on where Flodoard focuses on the invading king as a general force of unjust destruction and Adalbert has him single-mindedly focused on the target, Bishop Wigeric of Metz, who had attacked a royal estate. That’s only my speculation, though, and doesn’t settle the question.

8. On Liudprand’s agenda, see Karl Leyser, “Ends and Means in Liudprand of Cremona” in James Howard-Johnston (ed.), Byzantium and the West c. 850 – c. 1200: proceedings of the XVIII Spring Symposium of Byzantine Studies, Oxford 30. March – 1. April 1984, Byzantinische Forschungen 13 (Amsterdam 1988), pp. 119-143, repr. in Leyser, Communications and Power in the Middle Ages, ed. Timothy Reuter (London 1994), 2 vols, I, pp. 125-142, but in searching out that reference I find also the very relevant-looking Antoni Grabowski, “‘Duel’ between Henry I and Arnulf of Bavaria according to Liudprand of Cremona” in Roman Czaja, Eduard Mühle & Andrzej Radziminski (edd.), Konfliktbewältigung und Friedensstiftung im Mittelalter (Torún 2012), pp. 387-400, which I have not seen but seems worth mentioning.

37 responses to “What if Widukind was wrong about warfare?”