Oh well: let us look back on happier times. We now progress in my personal journey through my blogging backlog all of a fortnight, into early May 2015, at which point to find me you had to be in the United States of America, no less. This was ostensibly because of attending the International Congress on Medieval Studies in Kalamazoo, but the last two times I’ve done Kalamazoo that has been the only place I’ve been apart from airports, and this time I was determined to see a bit more of what is, after all, a big country. Luckily I was going with someone who has lived there for a time and so an itinerary more or less fell together just out of lining up people with whom they wanted to catch up. This saw me finally making it into Dumbarton Oaks and participating in the annual drinks to celebrate the foundation of Constantinople but somehow still not getting to the Museum, accidentally happening on the Arsenal of Democracy Flyover in Washington DC followed by very deliberately going to see a Texan and Japanese noise band doubleheader in a badly-lit club, beer and records with academic veterans in Boston and staying in a room in New York City that seemed to afford a view over most of downtown, and it was all pretty good. But you can imagine that it didn’t promise much by way of medieval remains, what with the whole New World thing. And yet! What is this? 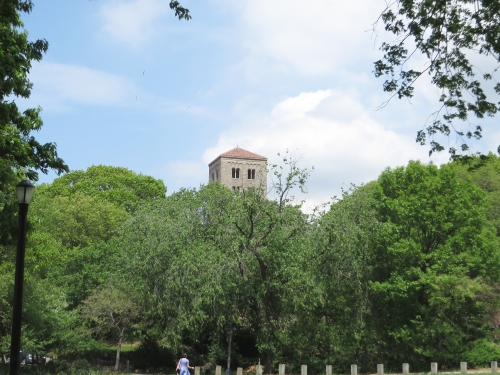 A suspiciously Romanesque tower obtrudes above the treeline!

Can it be… a medieval monastery?

The impression does not diminish with proximity

Now I have to admit that we did not happen on this by chance, unlike the Flyover, and that we knew perfectly well what it was, as indeed may you already; it is The Cloisters, a part of the Metropolitan Museum of New York which has been set up as an exhibition space that is itself one of the exhibits, mimicking (and indeed incorporating bits of) various European medieval buildings, including the once-Catalan Saint-Michel de Cuxa. The effect is really quite impressive, and very thorough.

It extends to interior fixings; they don’t all necessarily have a purpose now but there’s prolific and authentically medieval ornament almost everywhere.

I’m pretty sure this grotesque is not structural, but he (or she!) is pretty grotesque anyway 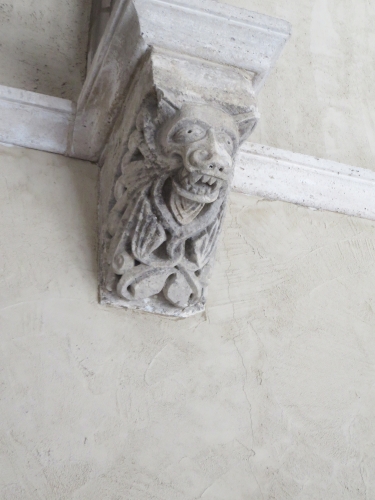 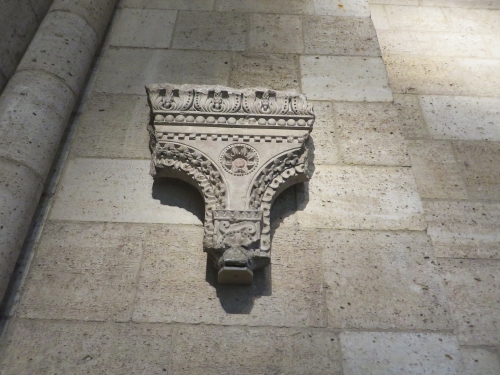 This is a lot more refined I think you’ll agree, but just as free from structural function now. When it had one, it was as a spandrel at no less a location than Cluny, however!

Except for the Cluny spandrel, these are, I think, all from Saint-Martin de Savigny; apart from the building itself, everything that’s on display was actually acquired from the Old World and ultimately from medieval sites. This is even true of many parts of the building.

I should also explain, by the way, that on this occasion my camera battery had died earlier in the day, so although I was acting slightly like a manic director behind her at some points, all these photographs were taken by Dr Rebecca Darley. This does at least mean that some of them actually contain me!

All very well but who’s this disgraceful hippy, you may well be asking, and fair enough! The architecture is, I think, from Reugny in France

There are also four actual sets of cloisters, two taken pretty much entire from then-derelict monastic sites that are now in France, these being Saint-Michel de Cuxa and Saint-Guilhem-le-Désert, and two composite ones assembled around remains from a couple of other French locations, Bonnefont and Trie. 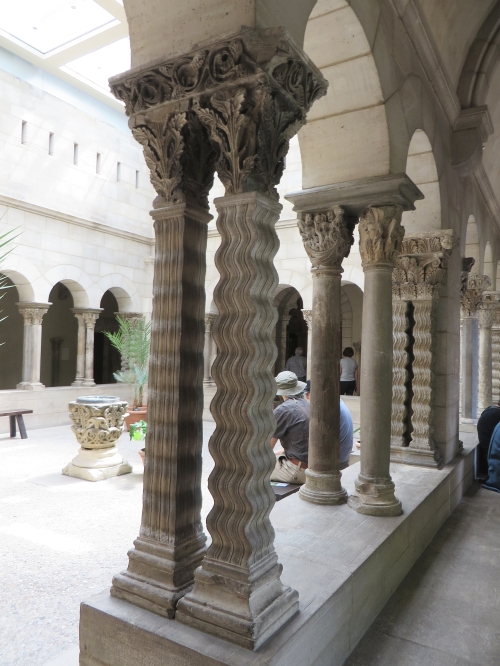 Columns in the Saint-Guilhem cloister. It’s probably unnecessary to say that I love this stuff so much that questions about its acquisition were at least briefly overwhelmed by joy at getting to see it at all

But not everything in these buildings is stone! For a start, established blog precedent requires me to mention this camel:

There’s quite a lot of fresco from Arlanza, but also other pieces of painted stuff. 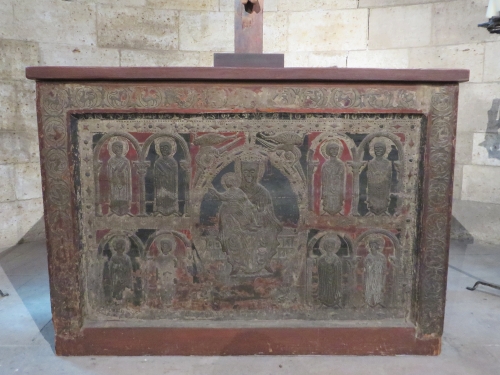 In the most elaborate reconstructions, indeed, paint and stone combine to give you the genuinely full effect of spectacle that light, colour and masonry could achieve in the medieval world.

If you’re not actually being watched from Heaven, at least it seems a lot closer than normal… This is the apse of Fuentidueña, again from Spain, and the wing it’s in was shut while we were there but I sneaked this picture through the door…

But there is also a myriad of tinier objects, in metal, wood, ivory and textile.

Array of jewellery in the Glass Gallery

I think my favourite one in here was this Byzantine piece. It presumably restricted what one could do with one’s hand somewhat… 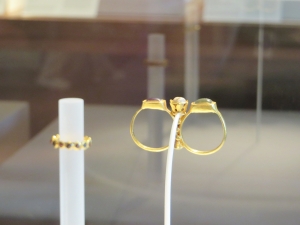 Some of the objects were a lot more elaborate than this, many bits of statuary and woodcarving that don’t really interest me as photos (including the tombs of four counts of Urgell), but as so often the mundane interests me more. 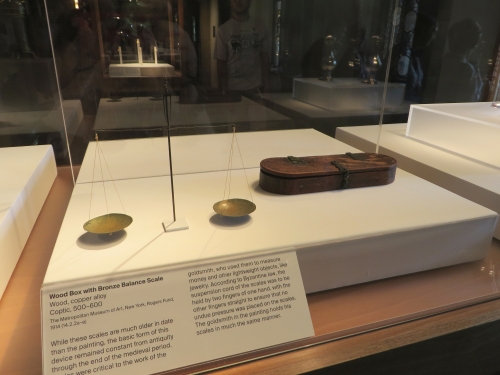 That said, some of the carving was too impressive to ignore completely… 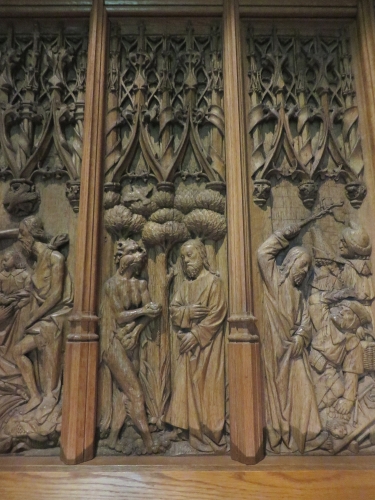 … and some of it just too close to being relevant! 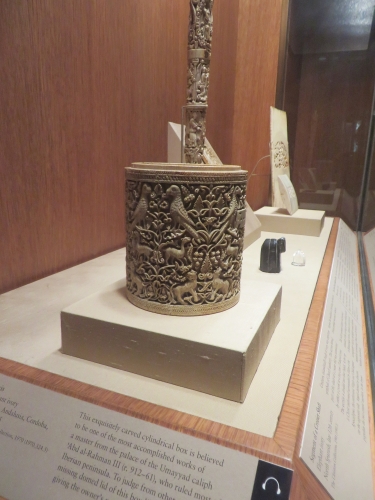 Ivory pyx from Córdoba during the reign of Caliph ‘Abd al-Rahman III (928-961), which is amazing work as well as being from my chosen century

As you will also know if you ever followed one of the blogs I recently had to take off my blogroll, The Medieval Garden Enclosed (though thankfully only because it now has a new existence elsewhere), the Cloisters is also a research institution in a number of fields, one of the most obvious of which is gardening. The actual cloisters were full of plants that probably would or could have grown at the sites whose architecture surrounded them. The problem the gardeners face is that the climate in Manhattan is not very friendly to many European plants, meaning that with great effort, love and care it is possible to grow things… 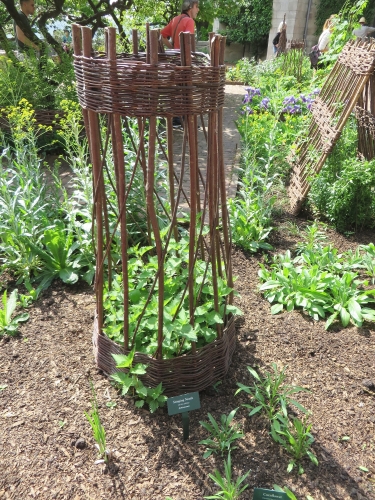 … that where I live we curse and rip up as weeds. They also had some very carefully potted ivy. But seriously: the whole place is amazing. If you have the chance, get up to Fort Tryon Park in Manhattan and see for yourself. From here we visited the High Line Park, which is also lovely and artistic in a rather different set of ways, and then next day flew to Detroit, and then took the train to Kalamazoo. Getting the train in Detroit was one of the most confusing and nearly-disastrous travel decisions I have ever made, but it worked in the end and we arrived cool and more or less collected for the 50th International Congress on Medieval Studies, and I’ll start telling you about that in a couple of posts’ time. But meanwhile, isn’t it all splendid? You might almost think the stuff belonged there…