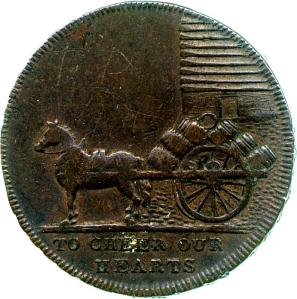 Since my appointment as a College Research Associate at Clare, they haven’t been entirely clear what to do with me. It doesn’t cost them anything except food to do nothing, of course, but I think they intended me to teach for them. However, it seems that none of their students are doing the early Middle Ages this year, so there’ve been none needing my special care. Instead, they asked me to do a class for the Historical Argument and Practice paper focussing on material culture as evidence for historians, and I agreed to put one on in the Fitzwilliam Museum where I work so that the lucky students could handle some coins. It went well, I think, but it does seem to be all there is available.

At the point when I realised this, I wondered about turning the class into a Powerpoint presentation (I didn’t use one for real, relying on a few OHPs and the actual objects) and putting it up here. Well, I’ve now done this. Click the image below for a download, MS Powerpoint 2000 format: if there’s interest in any other format I’ll make it available. 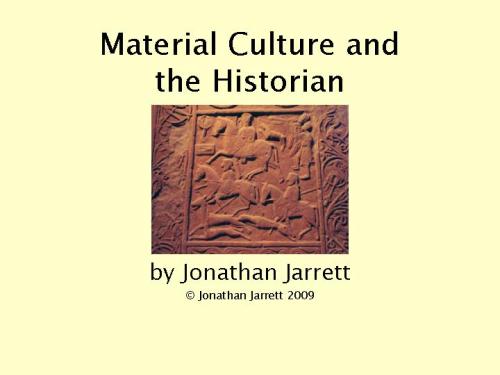 Material Culture and the Historian, by Jonathan Jarrett: Powerpoint 2000 download

I have to admit, this has been a wearing enterprise. It’s the first time I’ve tried to, well, remove myself from teaching materials so that they stand by themselves and I’m not sure I’ve necessarily done it perfectly; in fact I’d welcome feedback. What I’ve done is try and keep the slides fairly clear and basic (though they still have much more text on than I’d ever use in a teaching presentation, because there is no voice to explain what they’re about—maybe next time I should record myself explaining them as an embedded file?) and I’ve put what would be either the teacher’s notes or what Pratchett and Gaiman would call ‘precepts for the wise’ in the slide notes, so the presentation can be used to teach with and the teacher give extra details from those notes about the objects.

I don’t know whether anyone out there will find this useful—I only know a bit, though I’ve learnt it from some good people—but I was a bit reluctant to let it go for just one class, when there’s so little support for teaching in this frame in the courses I’m aware of. If I have a message here it’s that any source can be read, and also misread, but that the language can be interesting to acquire. As said above, I’m licensing this through Creative Commons, which allows you to redistribute and adapt this work but only with credit to me. That usually seems fair enough to me. However, this work contains other materials which are under restrictive copyright, and marked as such in the notes, and you would need to seek permission before using those in your own work. The full license is below.