[This post originally went up in September 2014, when it was stuck to the front page, and now that I have reached that point in my backlog it’s time to unstick it and let it go free into the flow. You may also like to be reminded that I wrote something that might interest you… or you may not, in which case stay tuned for new content about global history some time fairly soon.] 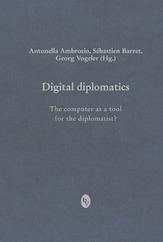 Cover of Antonella Ambrosio, Sébastien Barret & Georg Vogeler (edd.), Digital Diplomatics 2011: the computer as a tool for the diplomatist?

Second of the 2014 outputs now! In 2011, as you may remember, I went to a conference in Naples about digital study of charter material. It’s been a long time coming but the proceedings of that conference are now published, in the Beihefte of the Archiv für Diplomatik, and my paper is in there, the last in the volume indeed. It’s called “Poor Tools to Think With: the human space in digital diplomatics” and it’s about database techniques that try not to over-determine structure. Let me put that another way by exemplifying with a paragraph. Taking a data search from the Casserres material as an example, I write:

“I think that, where I have been prepared to deduce here, the deductions are all reasonable, but of course they are not certain. This is not a failing of the database, however; it is an accurate result. There is not enough information to make those judgements, and the data returned from the query accurately reflects that. This design is set up to require the human user to make the final decision, or not. This subset is small enough that I can, even without a computer, establish accurately that we cannot tell which of these [homonymous people] are the same on a logical basis, and I ought not, therefore, to entertain data schemas that would make me do so. We do not, in fact, have to make technical solutions for these problems, because the historian can do as much with the information presented this way as he or she can with it anchored to look-up tables and so on.”

This is coming out of the problem of building a structured database whose purpose is to allow one to identify people without having to identify them to build the database. If this sounds like a problem you too have faced, or expect to, I may have something to say to you! It’s probably as close to a publication of ‘my’ database method as there will be, and on a first read-through possibly actually free of typos, which I have never before managed. I humbly put it before you all.

Grim statistics: this was written in September 2011, revised and submitted in November 2011 and revised after editor’s comments in March 2012 and then again in April 2013. Proofs arrived in December 2013 and it’s taken 9 months to come to press, not what I expect from the Archiv which, last time I dealt with it, went through the whole submission process in that time. From first submission to press would thus be 2 years 11 months, rather below even my long average. But, fortunately indeed for a technical paper, my methods are so low-tech that they remain useful I think…

This entry was posted in Charters, Next paper is due... and tagged Antonella Ambrosio, computing in the humanities, digital medievalism, diplomatic, Georg Vogeler, publication, Sébastien Barret. Bookmark the permalink.

One response to “Name in Print XV”