Just after arriving in Birmingham, I finished reading Guy Bois’s provocative book The Transformation of the Year 1000 and was actually quite impressed; it represents a far better saving throw for the transformation theory than I’d anticipated.1 Seeing a problem with packing almost all the change required by the theory of Duby and Fossier and the like into a few decades shortly after 1000, Bois comes up with a quite complex paradigm of change in which he manages to have both slow change and a ‘revolution’ at the end of it.

This he does basically by saying that what we have in the tenth century is the final slow settling into ruins of the ancient state, with public government and justice, towns driven by a parasitic state apparatus administering those systems, and slave agriculture. This had been increasingly unsustainable as time went on and efforts like the Carolingian reforms to prop it up with new structures (and here’s the subtlety) actually accelerated its collapse by making more possible locally-concentrated power at the same time as a coincidentally burgeoning economy made that economically viable. Inside the old structure of society, therefore, new bases of importance and power were emerging centred on the market and on local territorial domination, all of which in fact made it harder to maintain the older bases of power as a monopoly. The revolution came when, with the end of the Carolingian state and withdrawal into the Île de France of its Capetian successor (because this is a paradigm about France, don’t think otherwise), the exterior structure of public power finally collapsed into dust, ceased to operate as a brake on the forces of social change, and what was left standing was this incubitic set of new power bases, now free to grow, around which the opportunistic (and here most of all the monks of St-Pierre de Cluny) coordinated their operations. And thus feudalism.2

The first bit about this that caught my critical imagination is the idea that those who were interested in patching up the ancient state actually undermined it; that is, the Carolingians in trying to make things better actually make things worse. Bois exemplifies this using the monetary system, which is probably why it caught my attention. In brief, the Roman system of gold and silver coins struggled on till the sixth century, whereafter the gold coinage was debased until it more or less ceased to exist, in the course of which it was struck by hundreds and hundreds of semi-private issuers all over Francia. After this the whole system atrophied and a desultory and poor silver coinage of a very various standard was all the money there was. The Carolingians, faced with a mono-metallic system, reformed it several times until there were a restricted number of royally-controlled mints striking a more-or-less good coinage but only in silver. This was lower-value, thus more accessible, so that greater monetisation resulted than had been so for a while, enabling market exchange and the collection of revenues in coin at new levels. And that meant that when the royal hands came off the tiller in the early tenth century that resource was available to the new local powers, who start minting their own silver coin in profusion (here again, nost least the monks of Cluny).3 I think there are problems with this as an actual account of the history of the coinage – that local minting in silver takes much longer to start happening than Bois’s chronology of change implies, suggesting that it is a result of market growth not a cause, for one thing; for another, Cluny got a royal license to strike coin, and it was otherwise outside any useful royal jurisdiction so one could read that as an increase in royal power and it’s certainly hard to see it as the opposite – but it’s an excellent illustration of Bois’s more general model of damaging attempts to preserve a dying social system.4

The problem I have with arguments like this that run, ‘O well they tried, poor dears, but the whole thing was doomed, quite hopeless, they were spitting in the rain’ about the Carolingians, which in some ways go back to Louis Halphen and his contemporaries, is that they benefit from the fact that the Carolingian Empire’s fall is there to be explained. Most of us would not, however, put this down to critical internal systems failure, but to a prolonged civil war more or less due to the royal family’s inability to stick to an equable division of power followed by a long series of assaults by raiders for north and east further destabilising transregional solidarities.5 A counter-factual approach that could accurately remove the effects of the Viking attacks and, if not eliminate the Brüderkrieg at least make it more like the equivalent, and very long-lived, Merovingian system in which the important thing was not so much the periodic war as that that war was always between rival Merovingians, perhaps by predicating a reasonable supply of healthy male heirs, would quite possibly entirely vindicate the Carolingian reform efforts, which after all did at least at first make them much stronger kings.6 An analysis that relies on an absence of competent legitimate operators of a system isn’t really assessing the viability of the system itself. Likewise, Bois’s argument is proven by the eventual collapse of the ancient state, but there’s a species of teleology involved when he says that the Carolingians’ own measures worked against their interests, which forces him to define the things they did that endured as part of the new world, if only because they survived. Given the collapse was to happen, there’s no successful innovation that Bois’s theory would actually credit to the Carolingians except ones that they abandoned.

Now, let’s take it to the March! Sant Andreu de Tona and the Castell de Tona, as made a tiny bit more famous by my book

This is all the more paradoxical because the same problem exists in reverse with Catalonia and the scholarship of the feudal transformation. As Bonnassie famously argued, Catalonia (where a strong and (I would argue) even strengthening public power was maintained up till very late, there was then a political vacuum caused by a double minority in the rule of Barcelona forcing other motors of power to pick up the slack and after a short civil war the public power recovered only by adopting these other motors and abandoning its old ones) is an almost perfect archetype of the feudal transformation, but because it so clearly revolves around the power vacuum of 1018-1035 and before that the public power seemed to be riding the serpent of progress really pretty well, people don’t like it as a general model.7 There’s also the problem that this was the only area of Latin Europe with much of a gold coinage, because of raiding and trade with al-Andalus.8 But Bois’s argument also revolves around a dramatic state collapse at the same time as an economic take-off. Is this somehow not the same?

Sticking with the metaphor, this is a gold mancus of Count-Marquis Ramon Berenguer I of Barcelona (1035-76), by way of illustrating that at least some things were not quite the same in Catalonia

Bois was of course writing a micro-study of Burgundy, not Catalonia, and it’s the anti-transformation lobby who have preferred to ignore Catalonia’s apparently indissoluble example of the phenomenon.9 All the same there is a problem here because Bois’s model doesn’t work for Catalonia. Firstly, it’s very unclear how much Carolingian reform was in fact applied here: the local law was left running, the final currency reform of 864 was never enacted here, the intellectual culture arguably stayed fairly Visigothic and the counts operated as independents from a very early stage. Secondly, as said, public power here did not atrophy: the counts, despite various troubles, remained militarily effective and towards the end of the period, fuelled no doubt by the various reveues of the frontiers, were even overhauling and improving the apparatus of state power and their control of it. Only when that effort was slackened did stuff go wrong. It is hard not to see Borrell II’s and his son’s creation of numerous castle-holding dependants as the seeds of their own undoing, but it’s not undoing but lack of doing that let them grow.10 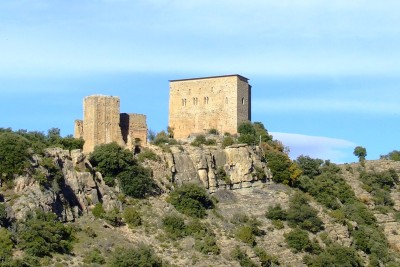 The current state of the Castell de Llordà (image from Viquipèdia), where as you have read some of that castle-ceding was done

Perhaps this doesn’t matter, but if you have a feudal transformation in one area and an explanation for it, but another one in a different area whose relevance you have to dismiss because its explanation is clearly different, this is kind of like ignoring that your theory has been falsified. Of course there are factors in Burgundy’s changes of that era that Catalonia did not share, so the problem exists both ways, but this suggests to me that the problematic has been placed at the wrong level. If you accept both then feudal transformation becomes only one way that states of a certain kind might respond to the end of effective state governance in an ‘ancient’ or ‘public’ mould. After three years of teaching this subject to graduates, I came to conclude that the correct question to ask about the phenomenon it assumes is not, “Why is all of Europe going through a social crisis c. 1000?”, which is fairly easy to disprove premise by premise and then ignore, but “Why do so many and various polities of the post-Carolingian world finish up so similar in social articulation and governance despite their different situations and paces of change?” This turns it less into a question of modes of production or public versus private than into one of cultural transfer and the appropriation of ideas between governments, which is maybe not as exciting, but might have a lot more application to other situations.

1. G. Bois, La mutation de l’an mil (Paris 1989), transl. Jean Birrell as The Transformation of the Year 1000: the village of Lournand from Antiquity to feudalism (Manchester 1992).

7 responses to “Feudal Transformations XIX: change before the year 1000”