From the sources VII: to demilitarise and populate

I can’t quite believe I haven’t yet posted this charter, as it’s important for a whole bunch of things, but as I noticed a few posts ago I haven’t, so here it is. This is a document from 973 that is unusually informative about the processes of settling a frontier, defending a frontier principality, about the rôle of the Church and counts in those things, and it also joins up with a couple of previous posts because as well as the inevitable Borrell II, it also features his mysterious kinsman Guifré whom I’ve mentioned here before and additionally a person who may or may not have been self-identifying as a Goth, in the late tenth century, which has also been a recent discussion here. So, here it is in translation; I’ll stick the Latin in first footnote again.1 It’s long, but it’s so full of stuff that it’s worthwhile, honest.

In the name of God. I Borrell, Count and Marquis and also Guifré, my kinsman, we together as one, under an inviolable faith in God and his sacred confidence, have chosen to make this donation to the Lord God and his holy martyr Saturninus, whose house is sited in the county of Urgell, not far distant from its selfsame see of Holy Mary next to the river, and so we do. For we give, willing of heart, to the aforementioned monastery, and to Abbot Ameli and the brothers dwelling with you or those who shall be hereafter, churches that were founded in ancient time and endowed with holy altars in the furthest outermost limits of the marches, in the place called Castell de Llordà or in the city of Isona, which was destroyed by the Saracens, and the churches… which were built in their confines or which shall have had to be built in the future. Of which, the first church is called Sant Sadurní, in its castle of Llordà. Another is called Santa Maria in the selfsame city of Isona, which was destroyed. Another Sant Vicenç which was a monastery in the centre of the already-said town, next to the spring which they call Clarà. 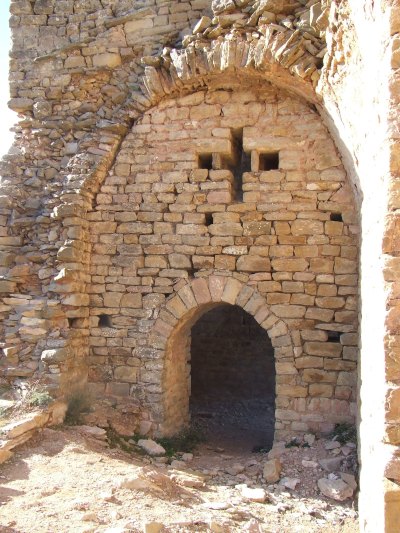 Sant Sadurní del Castell de Llordà seems to have been a fairly accomplished building, though as you can tell by the sunlight around the edges of this Viquipèdia view of the doorway between the belltower and the nave, not so much of the latter now stands

These aforesaid churches we do concede and give to the aforementioned monastery with their praises and possessions and the sum of their acquisitions with their tithes and first-fruits or offerings of the faithful living and dead in integrity; and we do concede the tithes of our dominical workings, present and future, to Holy Mary in whole. We have arranged similarly for the plots of the selfsame scouts and guards who have guarded the selfsame castle, and we bestow upon the selfsame already-said churches that which we have… [the bounds follow].

Whatever these same bounds include, thus we do concede to the monastery of Sant Sadurní aforementioned or to the abbots, to the monks present and future, so that they may make perprisiones wheresoever they may wish or may be able to far and wide through all places, build churches in the waste solitudes, make endowments in all the places; and let them spread labourers everywhere who shall reduce the selfsame wastes to cultivation and let them live in the selfsame endowments and there let them acquire and let them buy from the selfsame possessors whatever God shall have given to those people and shall have been possible for them. And the selfsame tithes which shall go forth from those selfsame perprisiones which they may have made there or will make in future, or from their acquisitions, we do concede and give all of them to the precious martyr Saturninus and from our right into his we do hand over possession, with the entrances and exits of the properties too. Again, we accord to the already-said monks that they may make aprisiones on the selfsame riverbank of the Noguera, in the place which they call Calzina, in the selfsame plain before the rock of Pugentoso, in the place which they call Calzina and before the rock of Petra and the selfsame water which descends from the selfsame mountains, ten plots in one year and ten in the next; and let them build a church in honour of Holy Mary and let the selfsame church have the tithes and first-fruits and offerings of Perafita itself and as far as the river Noguera and as far as the river Covet and over the selfsame mountains of Calzina. Let this however be under our hand and fidelity and those of our sons and let the assembled things which pertain or ought to pertain to the monastery serve under our defence and governance for all time.

The monks may or not have put in a church of Holy Mary as requested; either way, there's a twelfth-century one there now... (Image from Wikimedia Commons))

The charter of this donation made in the city of Barcelona on the 3rd Kalends of August, in the 19th year of the rule of King Lothar. If anyone against this donation should have wished to disrupt it, let him not avail in so doing but let him compound twofold and accept a portion with Datan and Abiron.

Bonfill, priest, who wrote this as requested.

So, OK, my temporary pupils, some talking points here:

The current state of the Castell de Llordà (much later as it stands; image from Viquipèdia)

So there’s that, and this is all very informative about exactly how the whole process of rolling out organised settlement might work, but there’s also some points that aren’t about process and play more to my particular and peculiar interests. You may by now know the word aprisio, which is used here to describe the clearances the monks may make in their own right, but note that it contrasts with the word Borrell or his scribe used for the ones the monks might make in order to settle labourers, perprisio. This appears to be an actual Latin recognition of the difference that Gaspar Feliu (again) has seen between private and lordly clearance; the monastery will be clearing for others, as agent, and that means they don’t get the full alodial rights that supposedly accrued to those who cleared land unless other arrangements were made. As keen readers of my stuff will know, I think that these rules were essentially only being finalised at this late stage, in other words that Borrell was here floating new terms that his father’s generation would not have understood, but this is where he was doing it, in the palace at Barcelona with two bishops who also owned frontier properties and his mysterious kinsman, whose concern with frontier matters seems to have meant that he must be involved.5

But lastly, what about the other notable witness, Guallus princeps cotorum, here rendered as `Chief of the Goths’? Well, if Jesus Lalinde had been right about `Goth’ by now essentially meaning someone living on land that made them liable to military service in the city garrison of Barcelona, this would fit pretty nicely wouldn’t it?6 Guallus would be the head of the garrison. Unfortunately, this charter is only a copy, not an original. The original, if that’s what it is, comes as you’d expect from Sant Sadurní de Tavèrnoles, who were getting all this stuff to make and do.7 And that version refers to Guallus not as princeps cotorum, which our editor here, Federico Udina i Martorell, ever the neo-Gothicist, read as a variant spelling of gotorum, but princeps coquorum, `Prince of the Cooks’.8 Udina’s text, indeed, has also been read as `princeps cocorum‘, a variant spelling of the same thing. `C’ and `t’ look a lot alike in this script, and Udina’s modification wasn’t stupid, but all the same, if it’s wrong, that might give Guallus rather a different place in the palace hierarchy, though apparently still one grand enough to flaunt in a charter signature. He doesn’t turn up again, so there’s no way to be sure.9 Obviously the original would be nice to have just to settle this, but I’d also love to know whether he could write. And also, how he cooked, of course…

3. Jarrett, Rulers and Ruled, pp. 15-17, gives some account of the differing models that have been suggested for frontier settlement; J. Jarrett, “Settling the Kings’ Lands: aprisio in Catalonia in perspective” in Early Medieval Europe Vol. 18 (Oxford 2010), pp. 320-342, has some worked-out examples and engages more critically with the historiography on the issue.

4. A more obvious example of this happening can be found in J. Rius Serra (ed.), Cartulario de «Sant Cugat» del Vallés (Barcelona 1946), II no. 464, which I discussed in an earlier post here.

One question I haven’t reopened here is why, if what is happening here is something that was so common in later eras, the count used a charter of donation rather than an actual contract to do it with. One may argue that those documents have yet to be developed, and that the change is only in the documents, and here I might be more inclined to buy that than I was last time I raised that argument, because firstly this must have been going on in many forms for many centuries, and secondly because such contracts are almost unknown this early; there are pacts of complantation and so on (explained here) but not actual deeds of obligation or whatever. I suspect that in this case at least, the answer is that the count liked the idea of couching this in a way that means the monks would have to pray for him for getting all this work to do.

7. Printed in Cebrià Baraut (ed.), “Diplomatari del monestir de Tavèrnoles (segles IX-XIII)” in Urgellia: anuari d’estudis històrics dels antics comtats de Cerdanya, Urgell i Pallars, d’Andorra i la Vall d’Aran Vol. 12 (Montserrat 1995), pp. 7-414, doc. no. 23. The doubt over it being an original isn’t serious, but it seems to have been used, along with Manuel Riu i Riu, “Diplomatari del monestir de Sant Llorenç de Morunys (971-1613)” in Urgellia Vol. 4 (1981), pp. 187-259, no. 1, to create at least Baraut, “Tavèrnoles”, doc. no. 21 and Petrus de Marca, Marca Hispanica sive Limes Hispanicus, hoc est geographica & historica descriptio cataloniæ, ruscinonis, & circumiacentium populorum, ed. É. Baluze (Paris 1688; repr. Barcelona 1972 & 1989), ap. CXV, ostensibly a copy of a copy of this document found in Urgell, which might even be the Tavèrnoles original but if so got `improved’ somewhere along the transmission. That forgers have had their hands on it doesn’t, however, seem to me to prejudice the original itself. It’s also from the Tavèrnoles version that I get the form of Guallus’s name, since as you can see Udina’s text renders him as Guadall. That would be a much more common name, which is partly why I reject it; I want this guy to be odd in as many ways as possible…

8. I discussed this in Rulers and Ruled, pp. 158-159, where I pointed out and will do again here, that a princeps coquorum, one Gunzo, is (unambiguously) recorded by the poet Ermold the Black in his praise poem on Emperor Louis the Pious, In honorem Hludowici, ed. Ernst Dümmler in idem (ed.), Poetae latini ævi carolini II, Monumenta Germaniae Historica (Poetae) IV, p. 71. I can’t show that the two can be connected, but if there was a copy of Dhuoda’s Manual for William in Barcelona perhaps there was also a copy of In honorem Hludowici somewhere that someone had read and mentioned one day to Guallus…

48 responses to “From the sources VII: to demilitarise and populate”