When I wrote this at the end of August 2013 I had just finished reading one of the very many books I really should have read a long time ago, partly because I’ve owned it since 2008 or something but mainly because of the number of people who told me I should during my doctoral work. The book is Barbara Rosenwein’s Negotiating Space, and I can’t help feeling I may have missed something.1 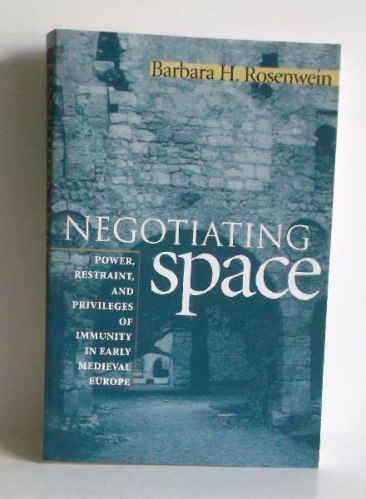 Cover of that selfsame book

Professor Rosenwein writes agreeably and sets out an interesting stall by beginning with the old adage that ‘an Englishman’s house is his castle’ by way of instancing the idea of legal immunity, a position or extent within which the law cannot reach you. By the time of the adage, this could be claimed as a general right, but obviously ’twas not ever thus and in the period with which this blog is usually concerned, immunity was more something you got for your properties from local authorities, who by excluding themselves and their subordinates from your jurisdiction effectively made you lord of all you could claim in the limits they’d given you. Now, absolutely there has been a lot of stuff and nonsense hung off this idea, in which kings mortgaged away their rights for immediate support and weakened the state in consequence, and Professor Rosenwein goes a long way to showing, in the sixth, seventh, eighth and ninth centuries in Francia and the tenth in Italy, how this need not have been so, because going to ask for such a concession as well as being awarded one bound one tightly into a relationship with the issuer, to whom after all one would have to look to make it official. As Professor Rosenwein points out, the Carolingians made this explicit by linking such grants with their protection, placing the recipients under heavy responsibilities towards the kings if they wished that protection to be useful. That is all good, and it probably needed saying in 1999.

If I have such a thing as a favourite immunity it’s probably this one, King Charles the Simple’s 899 grant to Abbess Emma and Sant Joan de Ripoll

It may indeed be that the take-up of this book was just so rapid and thorough that, as with so many things although this time second-hand, I’ve met so many people using this work that I no longer find these ideas surprising.2 It may instead be that it doesn’t surprise me because it is an argument cognate with that that says that royal grants were made mostly because people asked for them, not because the king bestowed them at whim, and that any grant thus represents a successful and plurilateral negotiation concluded.3 But I can’t help feeling that it is also not surprising because it’s almost the only commonality that Professor Rosenwein was able to draw out of her material beyond the obvious one that what immunities were changed all the time and varied with each use. The extreme malleability of this political tool makes it hard to characterise and I felt at many points that paragraphs slipped from one definition to another rather than actually joining them up.4 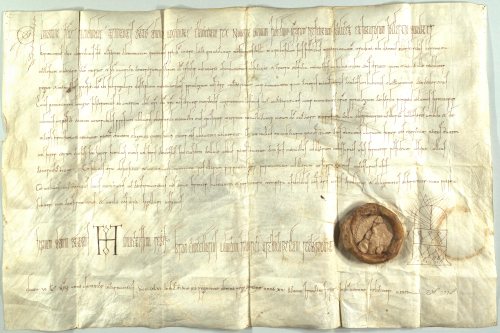 One has to admit that this is a bit more splendid, though, and not just because the seal is still attached. This is Emperor Otto I to the monastery of Einsiedeln, 947, Klosterarchiv Einsieden A BI 1.

It seems to me, from fourteen years down the line and benefitting from a lot of people’s thought about what the early medieval charter was actually for of course, that this may be a category error of sorts. Professor Rosenwein, when she wrote this book, clearly saw immunities as a category: she has appendices of exemplary ‘immunity’ documents, the whole book assumes that immunity is a diplomatic or legal thing that ranks alongside sale, donation, and so forth. Yet it seems to me that it is not so, that it is rather part of those categories. A royal precept of the kind I’m used to, which is to say, Carolingian, might include immunity, but that would be only one clause of several, and a grant of property without immunity would not look any different; you’d have to read it before you knew whether the special category applied.5 It would be late on in the document, too, after the goods had been conceded, described and all the rest, and there would be goods, even if they were only being confirmed rather than given. One could be forgiven, I think, for thinking that the goods were the main act and immunity only an aftershow. In fact one of the few things that would follow it apart from signatures might be the grant of free elections to a monastery (as in the Ottonian privilege above), often travelling with the privilege of immunity but not always. We don’t speak of election grants; why then does immunity need to stand separately from the donations and confirmations of which it always formed part in this period?6

2. I didn’t get all of it second–hand, in fact: part of the lack of surprise may be coming from my having already read Rosenwein, “Property transfers and the Church, eighth to eleventh centuries. An overview ” in François Bougard (ed.), “Les transferts patrimoniaux en Europe occidentale, VIIIe-Xe siècle (I). Actes de la table ronde de Rome, 6, 7 et 8 mai 1999″ in Mélanges de l’École française de Rome: Moyen Âge Vol. 111 (Rome 1999), pp. 563-575 of pp. 487-972, online here, coming out of the same research.

3. Mark Mersiowsky, “Towards a Reappraisal of Carolingian Sovereign Charters” in Karl Heidecker (ed.), Charters and the Use of the Written Word in Medieval Society, Utrecht Studies in Medieval Literacy 5 (Turnhout 2000), pp. 15-25; of course that was already obvious to Ramon d’Abadal i de Vinyals, Els Primers Comtes Catalans, Biografies catalanes: sèrie històric 1 (Barcelona 1958, repr. 1980), since the Carolingian kings could not easily affect Catalonia for most of the time that area sought such documents from them, and thus to me who read Abadal long before I did Merswiowsky.

4. This may of course be my fault, for reading it in dribs and drabs and always while soaking up enough morning caffeine to function. I can’t help feeling that the fact that the book acknowledgedly (p. iv) reuses material from six separate previous article-length publications, none apparently wholly or unedited, probably also contributes to this feeling of conceptual and syntactical cæsura it gave me.

5. The ones I’m used to are of course most specifically the ones to Catalonia, edited together in Ramon d’Abadal i de Vinyals (ed.), Catalunya Carolíngia II: els diplomes carolingis a Catalunya, Memòries de la Secció històrico-arqueològica 2 & 3 (Barcelona 1926-1952), repr. as Memòries… 75 (2009).

6. Possibly different in Merovingian or post-Carolingian periods but Rosenwein, Negotiating Space, pp. 81-89 and 144-146 suggest that she had trouble with the refusal of rulers then to stick to her category. See esp. p. 145: “The word ‘immunitas’ does not appear in this charter. Nevertheless, the phrases are clearly patterned on an immunity….”

14 responses to “Immune from criticism”