Venice II: Further Down and Further Out

After a post as heavy as the last as bonus content, I hope you’ll forgive me if the regular one is more medievalist tourism pictures. If that’s annoying, then you may be reassured to know that these are the last … Continue reading →

Sorry for the absence: despite working to contract at the moment, it turns out life fills up blogging time with work for other people sometimes. In order to get something out for the Bank Holiday weekend, however, here is a … Continue reading →

A Further Bit of Istanbul

I have to apologise for an unannounced three-week hiatus here. The simple explanation is that teaching restarted, I’m afraid, but there were also a couple of very full weekends, one of which did itself generate some medievalist photography which some … Continue reading →

A Novice Views India, Part I: divergent fates for places of worship

I promised photos, and they should have gone up several days ago, but a regular posting schedule is hard to maintain as the responsibilities of the season cluster, sorry. Nonetheless, I have it together now and will hope to get … Continue reading →

The last of these photo posts from my rush April 2018 trip to Catalonia covers the evening of the day covered in the previous one. With the later part of the day still free after my climb nearly to the … Continue reading →

By one of those occasional happy chances which look like coincidence but are actually probably consistent foci of interest, I’ve had this post intended for ages to follow the previous one, even before I fully realised the previous one was about a cemetery excavation and so would involve me using or not using photos of skeletons. And one commentator has even obligingly passed comment on the fact that I mentioned making that choice. Well, this post is about that very issue. This arises out of my having been to an exhibition which also raised that very issue, but that trip followed very hard on another exhibition opening which we’ve already mentioned, so I’m going just to mention it again first of all and then get onto the big issue for the day. That will involve one, slightly blurry, photo of skeletons, which I have put below a cut, so please don’t press for ‘more’ if such things distress you (already).

The Winchester Coin Cabinet, in the Brotherton Library, University of Leeds

So, we are at this point in very early October 2017 in terms of my backlog, and it was then that the project I had raised money for called Unlocking the Winchester Cabinet came to fruition and we opened both its physical exhibition and the virtual one that goes with it.1 I’ve talked about both of these before, and how they are very much mostly not my work but that of Leeds student, then undergraduate, now doctoral, Emma Herbert-Davies, so I won’t repeat that story here. However, for value added, I can at least explain how it came to be that the physical exhibition is deep in the Brotherton Library in the entry corridor outside Special Collections, where only people with library access can see it. You see, back in the 1990s when the rather extensive University of Leeds coin collection was in its first phase of care and curation under Christopher Challis, there was a wall display case outside the Library barriers, and it had been used for regular, but quite small, coin displays. Now, the case is still in position, and we had initially hoped to use it for this, but it turned out that it isn’t alarmed, and while that may have been OK in the 1990s it wasn’t going to pass security and insurance muster now. So we replanned for the current location, which has given us about twice as much display space, admittedly, but not where the actual public can see it. On the other hand, it’s also meant that no-one has yet seen a need to change it, so if you can get into the Brotherton Library, you can go see our exhibition still! 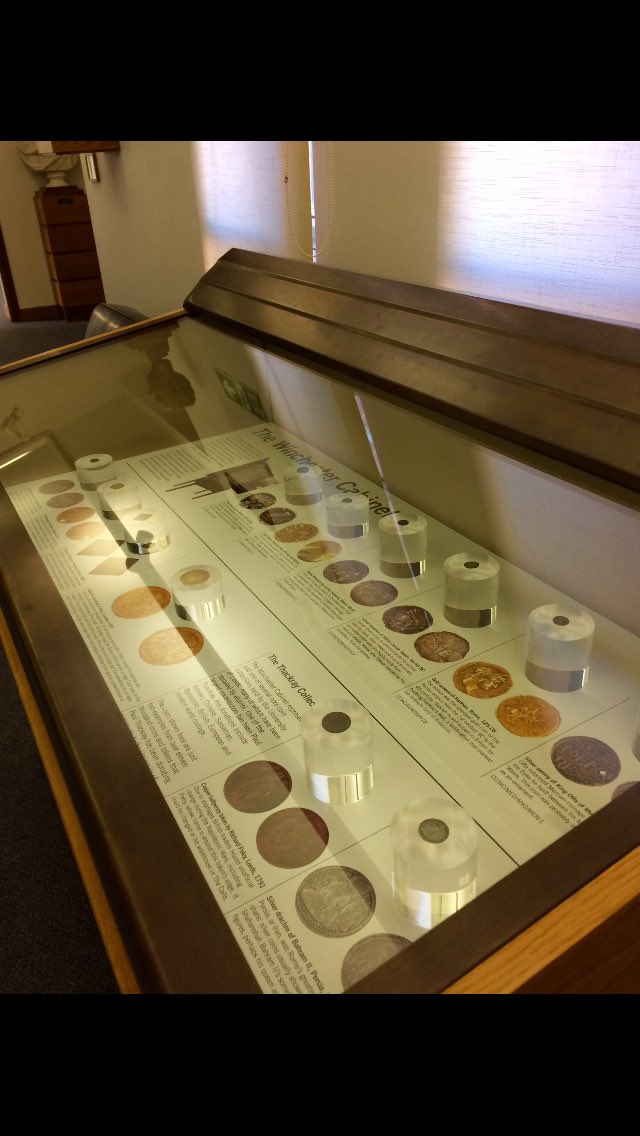 The exhibition in place: photo by Emma Herbert-Davies and used by permission

But the exhibition which is this post’s real topic I went to see a few days after our one opened, and was nothing to do with the University. It was in Leeds City Museum, and it was called Skeletons: Our Buried Bones.2 It was a single gallery, and the centrepiece displays were twelve skeletons, which had been gathered from collections in London, Leeds, Sheffield and Bradford, in the latter two cases university collections but not, perhaps thankfully, in Leeds’s case. (The London ones came from the Wellcome Collection.) The point of the exhibition was mainly to showcase the different things and personal histories which archaeologists and forensic scientists could learn about the people whose bodies these had been, using just their bones. On that score, I will freely admit, it was extremely well-done, pitched at a low enough level to be comprehensible and a high enough one to sound scientific, and with some fascinating stories to reconstruct, such as…

And of course all these stars of the show were actually physically there, laid out clinically in glass cases with careful explanations of how their histories had been deduced, suitable pointers to things like the arrowhead, and handy display panels around the walls about the sites where these people had been found and the wider archaeological context of which they came to form part. It was really very well-curated. And the one photo below the cut is as close as I’m going to showing you any of it. END_OF_DOCUMENT_TOKEN_TO_BE_REPLACED

By way of a light break between the last post, arguably intended to start an argument, and the likely next one, intended to record a conference, here’s some pictures. At the end of April 2017, with a relative visiting, m’partner … Continue reading →

Istanbul VII: a mosque with a longer history

Sorry that this post wasn’t, as promised, delivered last week; I have been having difficulties, and let’s just leave it at that. Anyway, today, having celebrated a centenary and sorted the last of my Istanbul photos, it is now blog … Continue reading →

Do you mind if we return to my September 2016 trip to Istanbul for some more photos? I’m hoping you won’t when you see them. This destination was, for me, one of the real mindblowers of the trip, and yet … Continue reading →

Returning for a post to the earlier-proclaimed trip I made to Istanbul in 2016, it seems sensible as blogger to impose some sort of order on an itinerary that was as much based on where things were in relation to … Continue reading →