[Written offline on the way to an editorial meeting in Birmingham, 19/12/11] 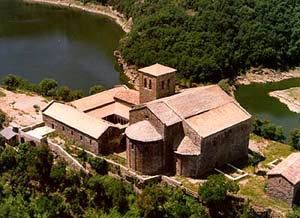 Sant Pere de Casserres, from above

Sorry again for delay: for various reasons it has been what I believe is known as “exploding head month” in these (and other) parts. Though by and large as described the Wednesday of Leeds was a grand success, there was some complication arising from the first session, as I mentioned. It will also resolve a few hanging hints if I say that this related to my work on the monastery of Sant Pere de Casserres, and its preceding church, which one way and another took up most of my research time in the first part of the year. One of the papers at the Wednesday session mentioned the place, and so I was able to talk to the speaker about my work on it. As this is now shaping up (and as it was then indeed) I’m quite pleased with it: in its small way it calls into question categories that are often over-schematic for the early Middle Ages, like `monastery’, `forgery’, `memorial’, `history’, `original’ and so on, and shows how secular power can use spiritual affiliations to get cooperation from a local population. Furthermore, it’s the most interdisciplinary thing I’ve ever done as serious research: it uses burial archaeology and epigraphy as well as diplomatic, and also blends the influence of my two most influential teachers in as much as it has me talking about how people of that era could control and use the past, and how power sought roots in localities, and so on.1 In its small way it’s a measure of how I’ve progressed as a scholar and I look forward to getting the thing out there. 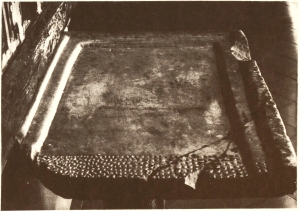 But, as you know, this has not been an easy task, not least because I’ve never actually had this as a primary project, and so it’s got done in rapid bursts which have not always been complete. Thus I started by just looking at the original charters in 2009, mainly because I wanted to use some unpublished material at last, and that gave me the basic diplomatic data, but then I found out that there were a shedload more from the place only preserved as abstracts.2 So I found out where they were and started planning to go there to read them too, and thankfully I hadn’t actually got to the point of booking tickets when I found out they’d been freshly published with a bunch more and indeed the whole lot put online for free.3 And then I hadn’t been able to get at the stone with the inscriptions on, so I made a trip out there to see it again and they still wouldn’t let me look at it except as a normal visitor, and I wanted to visit the site and it was only by the rarest of good luck that I was actually able to, though that at least was no-one’s fault but mine. And all of this you’ve seen here.4 So when I got to July I’d already had to add in two extra caches of charters, which maybe I ought to have known about. But, it turns out, “there is another”. 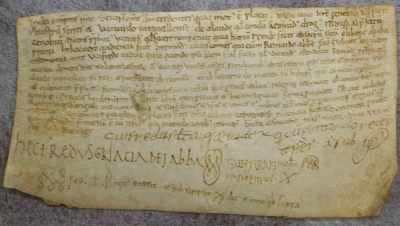 More complicatedly, it’s apparently a private archive. The person who told me this is editing it, so it’s not completely locked away apparently, but nonetheless awkward. And, really, I probably only need an inventory listing; I think it extremely likely that there are no documents in this archive that affect my argument, but since part of that argument hinges on a couple of documents not existing (I should know better than to argue from silence, I know) it is kind of crucial that I know that that’s true. Otherwise the journal I want to give it to will inevitably send it to the guy in question for review and he’ll shoot it down.5 Now I have been in e-mail contact with him, but shall we simply say I did not learn anything more this way than what he told me at Leeds, which did not include for example such details as the name of the archive or its geographical location. I guess he doesn’t want anyone potentially publishing any of it before he can, though I wonder if its custodians know he feels that way. 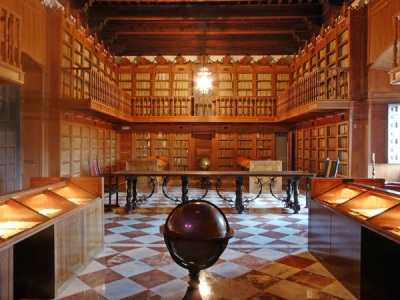 Well, you know, I’m a researcher and I know this field a little bit. I gave up hoping for a useful e-mail and set to the question, and found out what the archive is and where it is, which was not very hard to do once I got going. It is the Archivo Ducal de Cardona, which is a non-public part of the much larger and usually more accessible Archivo Ducal de la Casa de Medinaceli, until recently in Seville but now in Toledo.6 And okay, Seville would have been a nice trip but I’m pretty sure I can manage with an excuse to visit Toledo and spend a day with some documents, if they’ll let me and if I even need to. Indeed if there’s genuinely nothing to interest me then it may take less than a day. (So I’d better allow two and have a back-up tourism plan.) There are far worse fates than having to take a long weekend in Spain in springtime. But it does annoy me that I may well be spending, what, three or four hundred pounds to find out I didn’t need to go, simply because someone won’t answer a polite question. Hopefully the Archivo themselves will be nicer about it.

2. I found this out from Ramon Ordeig i Mata (ed.), Catalunya Carolíngia IV: els comtats d’Osona i de Manresa, Memòries de la Secció Històrica-Arqueològica LIII (Barcelona 1999), but it was Teresa Soldevila, Sant Pere de Casserres: història i llegenda (Vic 1998) that made me realise how much there was and how much use might be got out of that material. It is essentially where Soldevila’s book came from.

5. Because peer review is about keeping people off your patch amirite?