Bishops and metropolitans in Catalonia (also, the Carolingian conquest thereof)

You, the keen reader, by now know that I argue that Catalonia in the ninth and tenth centuries can justly be called Carolingian. It occurs to me to wonder how much you could possibly know of how that comes about. It’s essential background for being perplexed about what I’m currently perplexed about, and not for the first time. Let me set it up. 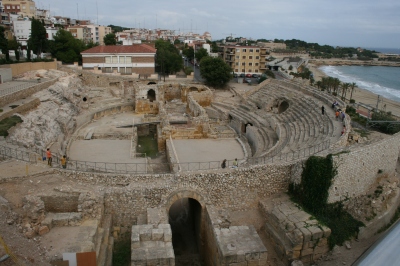 The Roman theatre at Tarragona in its ruins, from Wikitravel, copyright renounced

Spain, as I guess is not news to you, was conquered by the armies of Islam in 711, or at least, the conquest began with the defeat of the Visigothic king Roderick that year by the Berber leader Tariq, whose rock (jabal) Gibraltar (Jabal al-Tariq) is. The North-East took longer to fall: already in rebellion against Roderick, it set up its own king, Achila and he resisted till 714, when he is supposed, I don’t know on what evidence, to have reached terms with the Muslims, leaving his son Witiza II to hold on till 718 beyond the Pyrenees. Both these kings are known to us only from their coinage, so don’t say numismatists never tell you anything. But anyway. Tarragona, the erstwhile capital of the region, held out when it was attacked and was therefore bloodily sacked in 712, other cities thereafter reaching terms; Tarragona remained a ruin for the next four centuries, proving that the others were long-term correct to surrender.

But Catalonia was not Muslim for long. Muslim attacks through Aquitaine, as well as the Frankish desire to bring Aquitaine properly under rule and renew the regnum Francorum once held by the Merovingians, provoked Frankish aggression into the old Visigothic province of Septimania (the bit at the southern tip of l’Héxagone) and this in turn led the frontier princes of the Muslim state, whose allegiance to the centre was ever questionable, to look interestedly at Charlemagne when contemplating rebellion. In 778, famously, Charlemagne was induced to bring an army south into Spain by the promises of the walis of Saragossa and Barcelona to hand their cities over to him if he came to aid their latest secession. He did, but they didn’t, and on the way back across the Pyrenees Charlemagne’s army was hit by the Basques in an ambush, in revenge for his sacking of their capital Pamplona on the way in, and the seneschal Roland died with the vanguard trying to fend them off. In later years someone wrote a song about this that you may have heard mentioned.

Anyway, it is argued that this must have left some people in Catalonia in a difficult position vis-à-vis the Muslim rulers, at least if they’d joined Charlemagne’s army or, I don’t know, put out “Franci veniunt, Agareni ite domum” posters or something. Certainly there seems now to have started a significant wave of emigration from the area into ‘safe’ Septimania, and in 785 the cities of Urgell and Girona, we know not under what control, handed themselves over to Charlemagne. So at least say the Royal Frankish Annals, and as the campaigns go on they are joined by the works of Thegan, the Astronomer and Ermold the Black.1 This and the immigrants drew the Carolingians back into the area, and Louis the Pious, at this time King of Aquitaine, and his right-hand man Duke Guilhem of Toulouse, campaigned more or less annually thereafter to secure it, refortifying large swathes of frontier on old Iberian sites or empty Visigothic cities, and in 801 managing to take Barcelona. They held Tarragona briefly, but found it worthless, and couldn’t get either Tortosa or Huesca beyond it despite numerous attempts, so the old province of the Tarraconensis remained partly-Muslim. What is now old Catalonia, Catalunya Vella, is more or less what the Franks took. This is also why Catalan is a different language from Castilian Spanish, much more like French, Provençal or indeed Latin.

The importance of this for what I’m writing about is that Tarragona, empty and Muslim-held, had been the area’s metropolitan see. Without it, the Catalan bishoprics (two of which were suppressed anyway and their territories divided) were placed under Frankish Narbonne. Now, thanks to the patient work of a man called Don Ramon d’Abadal i de Vinyals for many years, Catalonia is not thought to have had much of a national identity this early.2 The area was split between many counts, until the tenth century was repeatedly sunk into civil war between them, did not (and does not) have a single language and was sprinkled with immigrants from both sides of the border. Don Ramon had to work against a justly patriotic school which wanted to assert Catalan identity in the swamping Spanishness (Catalunya no es Espanya!) of the kind of unifying historiography seen, for example, in the statues in my post on Madrid, and he had to do it largely during a period when Franco was trying to put all that back again, but he did more or less succeed, and these days it is usually felt to be the 985 sack of Barcelona that shocked Catalonia into realising that it was on its own and furthermore therefore of its own.3 But when you read about the Church, specifically, this work seems to be forgotten in the wake of three stories that won’t die about attempts to renew the metropolitanate of Tarragona and break away from the Frankish Church.

There is no question that the lordship of Narbonne over the bishops across the mountains from it weighed more heavily than royal rule did, but I’ve still never bought this secession idea. Furthermore, Don Ramon only bought it for one of the three, but nonetheless the trio is repeated again and again in stock histories by contributors who should know better.4 I actually have a paper under work about this, have had for years, and I hope still to get it out some day so I won’t go into too much detail, but, some idea. The three episodes are these. In 886, when Bishop Ingobert of Urgell fell ill, the chapter seem to have uncanonically appointed a replacement called Esclúa. Ingobert got better but Esclúa didn’t retire; instead he collaborated in the appointment of a new bishop of Girona, Ermemir, despite Archbishop Theodard of Narbonne having chosen one Servedéu, and in the appointment of Bishop Adulf to an entirely new see at Pallars. A Narbonne source also says that Esclúa claimed he could do this because he’d named himself Archbishop of Tarragona and several other bishops had gone along with it. Because, however, he had the backing only of the less powerful of the March’s two main counts, Archbishop Theodard was able to enlist the support of the other. He and the count, none other than Guifré the Hairy, went and got King Odo, whom Guifré had not recognised until now, to withdraw his support and empower them to reimpose order. Esclúa and Ermemir, says the Narbonne source, were degraded in council in 890. Well, this has been disproved for thirty years. The Narbonne source, indeed, and the fake papal Bull it includes, have been declaimed as forged since 1933, and Esclúa went on appearing as bishop until his death in 924, even though Ingobert was apparently restored; there also seems to have been some power-sharing at Girona, though Ermemir disappeared much quicker. So that’s rubbish and the episode looks like local factionalising, not secession.5

Between about 941 and 966, the counts of Barcelona were again briefly in charge of Tarragona. (I’ve been told by a reviewer that no historian takes this claim of the Arabic sources seriously, but well, actually many do, it comes from Ibn Hayyan who originally worked from administrative records at Córdoba, and it seems a very unlikely thing for any subsequent editor to insert, because it was soon reversed and does no-one any particular credit.6) Around the beginning of that time, anyway, we are told by a very strange letter in the name of Abbot Cesari of Montserrat that he went to Santiago de Compostela and there got himself ordained by the bishops there as Archbishop of Tarragona. (No-one who has written about this has realised the old see was actually Christian again at the time, as far as I can tell. What the time was is tricky: Cesari, if it genuinely was he, gives a date that should be 940 A. D., but the list of officiating bishops he mentions fits only to 956, if then, and that’s roughly when the title starts appearing in the copies of the Montserrat documents too.) The letter says that when he returned home, none of the Catalan bishops would obey him, so he retired back to the monastery, where we do indeed have records of charters that called him Archbishop. This one’s hard to refute, but what is clear is that wherever he got his title, no-one took it seriously, perhaps because of treaties forcing the return of his see to the Muslims in the 960s.7

The three papal papyri of Pope John XIII to Vic

In 970, Count Borrell II of Barcelona took his pet Bishop of Osona, a guy called Ató, and their star pupil Gerbert of Rheims, later to become Pope Sylvester II and even later to be infamously remembered as an Arab-trained magician, to Rome to beseech Pope John XIII. They came home with five papal Bulls (three on papyrus, two on parchment, apparently…) saying firstly that Ató was now Archbishop, Tarragona’s rights being shifted to the see, and secondly that he should take over the administration of the see of Girona where, the pope was horrified to hear, a neophyte had been elected, which was totally illegal. Actually, Ató was murdered inside the year, we never see him act as Archbishop and though his see recorded him as such, Girona when it noted his death called him only Bishop; his successor Fruià went to Rome but only as bishop even though the Bulls said the dignity would be renewed in his successors, and generally, whatever happened here didn’t work out and wasn’t agreed at the time even in Borrell’s own territory (he also ruled Girona). So even if they really did ask the pope, which I have doubted, it didn’t work for long.8

So we have three `archbishops’. None of them were universally accepted even in their own patron’s territories, one of them almost certainly never really claimed the dignity, and the Archbishop of Narbonne retains his rôle in the area throughout. It’s really not a nationalist breakaway movement by a whole Church. And all this has been known for many many years, so why do these venerable and otherwise sharp scholars persist in ignoring it? How important can this one myth be when they’ve been willing to discard so many others? Why do I keep reading these stories over and over again like Gospel? I understand nationalism, I do, even if I don’t feel it myself, but this is such a weird manifestation of it…

8. Martí, “Delà, Cesari i Ató”; I presented my views as “Archbishop Ató of Vic: ecclesiastical separatism in Carolingian Catalonia”, paper presented at EMERGE 2003 Conference, University of St Andrews, 13th September 2003, but my argument has got a lot more complicated since then.

19 responses to “Bishops and metropolitans in Catalonia (also, the Carolingian conquest thereof)”