Medieval religiosity can often seem very strange to the modern viewer, not least because decrying the Middle Ages as superstitious has been a major trade since the Renaissance, as Eamon Duffy and Kathleen Davis would in their very different ways contend. Monasticism, I think, we usually just about get, although we perhaps see it too much as the retreat from the world that we most of us sometimes want and too little as voluntary self-imprisonment under continual surveillance, which would be just as true. The cult of relics, on the other hand, is often beyond our sympathy. This runs us into another problem with studying other societies, now or then, which is that of normality. What seems odd to us may be or have been normal to them. This makes it difficult to recognise when something genuinely unusual is or was being done. But I think this one is a fair cop. 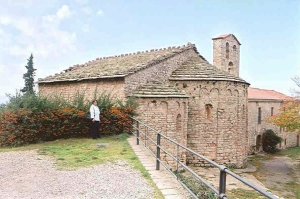 I’ve spoken of Abbot Cesari of Santa Cecília de Montserrat here before, because of his having been one of the four archbishops of Tarragona that tenth-century Catalonia didn’t have. I actually think the case for Cesari’s having been given some kind of uncanonical episcopate is all right, but if so it’s clear that no-one gave it any credit except in the immediate environs of the house he’d founded out on the wild frontier with several other companions from deep-south Hispania in 947. Now, that makes him odd for a start: it isn’t just everyone who wants to be a monk, and still fewer of those wander hundreds of miles north to an occasional warzone and beg land from a potentate with whom they have never before had contact in order to start their monastery. When, having done all that, such a person then starts getting himself called Archbishop, and claiming a synod in León made him so, I think it is fair enough to speculate that his contemporaries did not think this was perfectly regular practice or one of some set of competing norms…

The actual politics behind this episode are extremely tangly and if you want to know what I think in more detail than I’ve given it here before, you can see my upcoming article about the four fake archbishops.1 But when I first looked at the episode, it wasn’t just circumstantial evidence that made me think Cesari was a nutter. In 970, you see, he seems to have written to Pope John XIII asking for support in claiming his archiepiscopal rights. The document survives in Vic, and it is a star piece of diplomatic oddity both intrinsically and extrinsically.2 Quite apart from the actual claims it makes,

The document itself only adds to the impression of strangeness: its orthography is peculiar, phrases that the redactor presumably felt to be important are written in uncials, the florid and almost-incomprehensible arenga appears to be unconnected to the subject matter, and there is a peculiar and repetitive emphasis laid on the personal beauty of the Leonese bishops.

That’s from an earlier version of my article, but the final one says the same thing only shorter.3 But at the time I put this down to Cesari being old, possibly not very well and basically arguably no longer right in the head, or you would think that the various ways in which the content is barking would have been trapped also.4 Now, continuing the trawl through Catalunya Carolíngia IV, I find a longer perspective forming. The text in this case is the act of consecration of Santa Cecília, from 947 as I say, and as soon as I saw it I recognised the style: rambling verbose sentences of pious diction that don’t necessarily make sense, and amid all the pious formulae about why monasteries are great and necessary and deserving of princes’ favour, this:5

Now, stop me if I’m wrong—I know you will, which is part of why I put this stuff up here indeed—but I think that can be Englished as:

In such a way, namely, so that those neophytes to whom the property was revealed thus by God and rebuilt in neophytes’ manner, may thus stay there undisturbed and without terror or the infestation of evil men and serve the Lord under a monastic régime…

So, stop me, but is he not claiming that he’s establishing a college of visionaries? I realise that he could just be being metaphorical about the revelation but it sounds a lot more structured than that to me, what with the emphasis on their uneducated status (especially since two of them are actually priests); I think he’s stressing their holy innocence and purity as vessels for the Lord’s will. So, I had the natural thought of a medievalist in these circumstances, to wit: “that’s weird. I wonder if it’s Augustine?” But I hit up the Patrologia Latina database and it seems to be original, at least I can’t get ‘neophyti’ and ‘revelata’ out of it in the same sentence. So, I don’t really know whether this gives us valuable insight into the mind of a monastic founder, or if it just confirms my general feeling that the man was a fringe mystic who doesn’t really represent anything. I suppose it does help explain, in conjunction with work like Peter Brown’s on the charisma of holy men, how he managed to get his locality calling him archbishop and indeed how he persuaded Countess Riquilda to persuade her husband to give him so much of the locality in the first place.6 I mean, I imagine his preaching was pretty powerful, if a bit disorganised and frothing. Even that just goes to show how much of a journey it is for me to try and get anywhere near this man’s mind when I’m sat so firmly in a secular early twenty-first century, though. Maybe if I can get to Santa Cecília I’ll have a better grip on him and his like, if there were in fact any others like him…

4. They are listed in vituperative style by José María Martí Bonet, “Las pretensiones metropolitanas de Cesáreo, abad de Santa Cecilia de Montserrat” in Anthologica Annua Vol. 21 (Roma 1974) pp. 157–182, where he decried the letter as a forgery, although in “Entre dues obediènces. Roma i Compostela” in Analecta Sacra Tarraconensia Vol. 67 (1994) pp. 387–397, he seems to have changed his mind.