The second king of Spain

Earlier this year, in the quest to finish an article, I was working my way through the Castilian translation of one of the major Arabic sources for the north-east of the Iberian Peninsula, the Tarsī‘ al-ajbār of al-‘Udrī.1 This eleventh-century writer took a historical-geographical approach, and, as we have the text at least, proceeded town-by-town and for each gave an account of its natural features and situation then its ruling families.2 Since the same four or five clans dominated all the cities of the Sharq al-Andalus, the Upper March, or Zaragoza and points north and east, call it as you like, this gets very confusing after a while as people who need ancestry given to three removes to distinguish one Muhammad ibn Lubb from the next occur in city after city, but Fernando de la Granja provided some hand-drawn fold-out family trees and it’s manageable. I was here mainly for the wālī family of Barcelona, but they come in a long way behind the main source of independence, treachery and mayhem on the March, the lordly family we know as the Banū Qāsī. 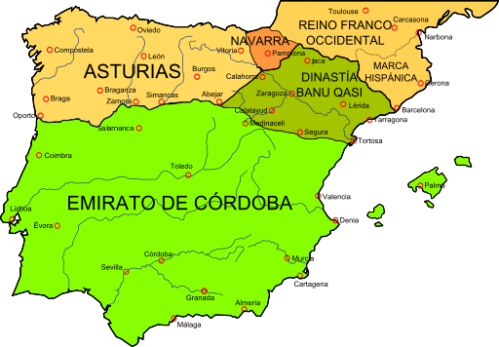 A map of the Banū Qāsī domains and the wider political situation c.  910. As we’ll see, I think this is a deal too generous to Asturias, but that swathe probably did all recognise the same king. Nevertheless… read on! By Crates [GFDL or CC-BY-SA-3.0-2.5-2.0-1.0], via Wikimedia Commons.

Now the Banū Qāsī, supposedly ‘sons of Cassius’, have come in for a lot of attention just lately and I haven’t been able to read very much of it, so I risk being out-of-date, but nonetheless, on the extremely rare occasions I have been able to teach that which I actually work on (maybe five times in my life), I have tried to use one particular teaching point about them.3 This is that it is said in the Chronicle of Alfonso III of the family’s greatest patriarch, Mūsā ibn Mūsā ibn Fortūn ibn Qāsī, that he called himself “the third king of Spain”, tertius rex in Spania, meaning he was number three in importance in the contemporary political firmament.4 The Chronicle has lots to say about Mūsā, who was a rough contemporary with its Asturian royal heroes. At the point when Mūsā is supposed to have said this, he was ruler of Zaragoza and the entire Upper March, had rebelled against the Emir of Córdoba six times and defeated him nearly as many (though also been forced to submit four times) and had also laid waste to several Christian armies, and he certainly did control a lot of cities. Nonetheless, this claim has always seemed to me to leave something important unsaid, which is, who did he think was the second king of Spain? 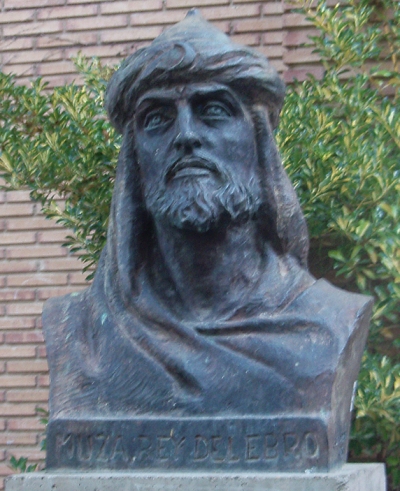 Tudela are still very proud of their ‘Rey del Ebro’, as you can see. By Arenillas (Own work) [Public domain], via Wikimedia Commons.

One has to admit straight away that no text other than the Chronicle of Alfonso III contains this line, and for its author, writing in the capital of the growing kingdom of Asturias, the answer was obvious: while the Emir of Córdoba probably still, despite a kingdom full of aristocrats like Mūsā, ranked as number one in his mind, King Alfonso’s Asturias was surely number two, and indeed the whole point of having Mūsā say this was presumably to show the audience that important and famous outsiders had recognised this long since. It makes that point so well that I suspect that it was just made up for this purpose. But if Mūsā had said such a thing, is that what he would have meant? Certainly, in his world, Córdoba, when it could get itself together, was the only single power he needed to fear: he fought emiral troops eleven times at least, losing on most of those occasions (though never so badly as to lose his position in at least one of the Marcher cities). Asturias, on the other hand, he met in battle only twice, and on each occasion they were teamed up with the Basques of Navarra, at Albelda both times. On the former of these occasions Mūsā defeated the Christians, on the latter, they him. He also fought local forces at Álava once, which was probably not yet Castile so counts as Asturias (this being my quarrel with the map). 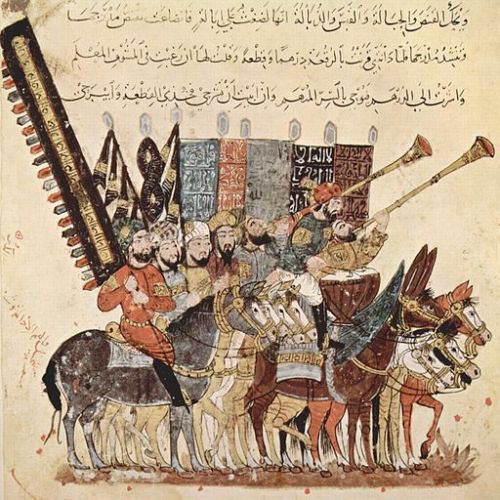 For want of any closely contemporary media, here is a thirteeenth-century picture of some Muslim warriors, set to go with a tenth-century text telling a story set in the seventh century! Yahyâ ibn Mahmûd al-Wâsitî [Public domain], via Wikimedia Commons

Nonetheless, his measure of the political scene has also to be measured in his alliances. Here again the Emirate was foremost: Mūsā fought as part of emiral armies on at least four occasions, against the Catalans twice and Vikings once, the fourth being the Álava campaign. When he fought against the Emir, however, his allies were not Asturias but the Basques, into whose royal family his mother had been married. They came to his aid three times, though he also fought them four times, and the families remained closely intertwined, Basque princes fighting on both sides in the second battle at Albelda. It really doesn’t seem to me that Mūsā looked north-west that often. His ‘second king in Spain’ would probably really have been himself, but number three on the podium probably wouldn’t have been Ordoño I’s Asturias, who were just where his Basque sometime allies found extra troops when they needed to make a point. Standing competitively by his side in that ranking would have been the King of Pamplona, I reckon.

It’s too easy to forget that Navarra and the Basque families who ruled it were for a long time really big local political deals, because in the end the kingdom got swallowed into its neighbours and didn’t lead the great drive towards unification led by Castile that has been the grand narrative of so much ‘Spanish’ history. I have a chapter now in press that points out that in 1031, when the Caliphate of al-Andalus definitively ended, it would have been impossible to foresee a Castilian domination of the whole peninsula. That was not just because the exact state of the Muslim zone was still in flux, but also because the leading Christian monarch at that point was King Sancho Garcés the Great of Navarra, and he was lord of the Counts of Barcelona and Castile and would soon get his nephew in as King of León. It wouldn’t last, but not everything does. Mūsā’s famous, and probably spurious, quote still helps remind us that the way things finish up need not be the way they looked long before.

2. I say, “as we have it,” because the text as given by de la Granja periodically makes it clear that it is in the voice of another writer reporting what al-Udrī had written, rather than the work itself, so there’s no reason to suppose that what we have is all of what al-Udrī wrote, rather than a selection by someone else.

3. Until quite recently there was only really one thing, Alberto Cañada Juste, “Los Banu Qasi (714-924)” in Príncipe de Viana Vol. 41 (Pamplona 1980), pp. 5-96, with some useful remarks added in Eduardo Manzano Moreno, La Frontera de al-Andalus en época de los Omeyas, Biblioteca de Historia 9 (Madrid 1991), pp. 217-222, but now there is also Jesús Lorenzo Jiménez, La Dawla de los Banu Qasi: origen, auge y caída de una dinastía muladí en la frontera superior de al-Andalus (Madrid 2010), which has caused quite a stir, largely in places where you can follow it up yourself if you like. I haven’t yet read this as I would need some days in London to achieve it… Only two libraries there seem so far to have acquired it in England, ironically both in the same building.

4. Referencing the Chronicle of Alfonso III can get one into trouble: there are four more or less contemporary critical editions, all done more or less without knowledge of each other, and the Castilians don’t like it if you use the French version. I find that more neutral in commentary and better aware of German work on the manuscripts, however, so recommend Yves Bonnaz (ed./transl.), Chroniques Asturiennes (fin IXe siècle) (Paris 1987), and whichever edition you use you will find the text sub Era 888 or s. a. 850. There is an English translation, in Kenneth Baxter Wolf (transl.), Conquerors and Chroniclers of Early Medieval Spain, Translated Texts for Historians (Liverpool 1990, 2nd edn. 1999), but I don’t like this as it blends two different recensions of the text in a fairly selective way. Most of what follows comes from Cañada, however.

5 responses to “The second king of Spain”