Another Damned Medievalist, whom it was great to actually meet the other day, expressed an interest in this, so I thought I’d post it here for general awe and wonderment (awe not…). This is coming out of the Leeds paper, and I was making transparencies of these two images at great speed when I first drafted this, so it’s short. But: you all know what a charter looks like, right? Here’s one from my area, to be precise, from the cathedral of Urgell in the north-west of Catalunya Vella: 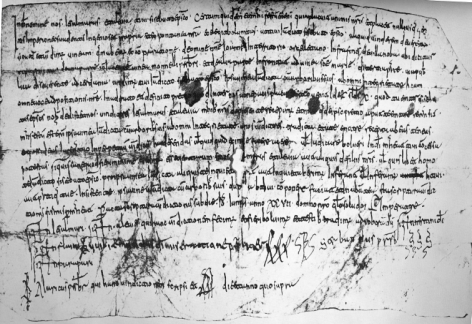 Now, this is an area of Spain that used to be ruled by the Visigoths, who are scholarly-wise famous for their heavy use of written documents, right? So you’d expect the Visigothic charters to be the antecedent of this scruffy parchment. We don’t have very many Visigothic charters, though, and of the seventy-odd we do have, in some form or other, mostly fragmentary, only two are sales. Here’s one: 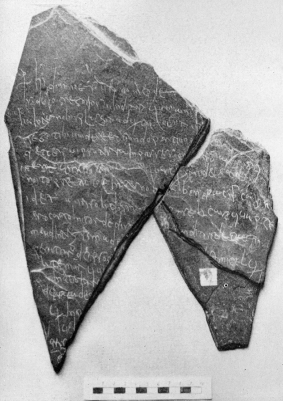 Yup, it’s on slate. Cheaper than parchment you know… Most of the Visigothic charters we have are, but that’s because most, where most is about fifty-five, come from two caches in the far south of Spain, one of which may have been part of a city archive but one of which is basically a family dossier and goes down to fiddling stuff like weekly cereal allowances for the slaves, and so on. An actual transaction like this is almost unique, and as you can tell we haven’t got all of it. Cheaper, but not as durable… (Full details in Angel Canellas López (ed.), Diplomática Hispano-Visigoda, Publicacións de la Institución Fernando el Cató́líco 730 (Zaragoza 1979), though this image came from Manuel Gómez Moreno (ed.), Documentació́n goda en pizarra: estudio y trascripción, rev. M. Casamar (Madrid 1966).)

Actually the texts aren’t so very far different, though formulaic, but you know, not really the same documentary culture…

N. B. I have real trouble sizing big images on this blog; once one size is in the preview won’t update when you change the file, so these may be all over the place; I hope it looks OK from where you are anyway.

This entry was posted in Charters, Now working on..., Spain. Bookmark the permalink.