The gilty heart of Venice

If you’ll permit me a return to medievalist holiday photographs – and, kind readers, you have never so far objected – then you may recall that I wrote two weeks ago of heading for Venice in July 2019. That was my first time there, and if you’ve never been either, you may not be any more ready than I was for a city where the roads basically stop outside the door. 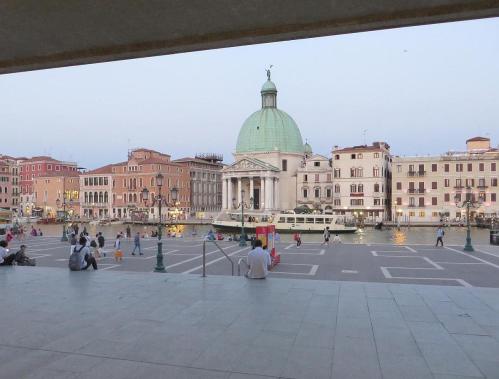 The Gran Canale and San Simeone Piccolo, Venice, viewed from the exit of Santa Lucia station. The roads end behind me; there are no motorised vehicles on the main landmass of Venice, though a ferry runs them down to the Lido beyond it, where life is a little more normal again. But who needs that? Photograph by your author, as are all those here except where stated otherwise.

It’s not really possible to talk of Venice having a city centre, because of course it’s spread out across islands; it either has several centres, or neither, or the centre is the Piazza San Marco, to which we’ll come shortly; but in any of these cases they’re all surrounded by, shot through with, and navigated by water. 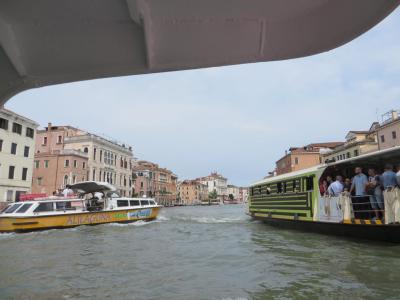 Travelling down the Gran Canale in Venice by vaporetto

So that was how we got to San Marco, as you more or less have to do. 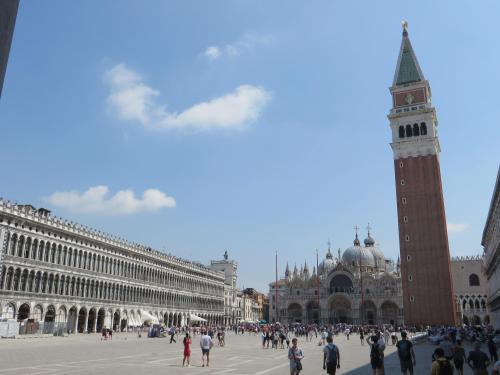 Here it is folks

That sounds oddly negative, you may be thinking, for what is surely the monumental heart of this crucial medieval city. Furthermore, isn’t San Marco itself pretty much the oldest standing building on Venice’s main island? It’s about as close as you can now get to standing in a Middle Byzantine church, so what’s your problem? And it is threefold, part one being: everyone else is there too, whereas much of the rest of the city except for the crucial bridges you can often get to yourself, even in high season; part two being, the Byzantinising core of it is pretty well built around and over by later, and to be honest somewhat excessive, additions…

Mosaics and decoration on the left side of the east front, photograph by Dr Rebecca Darley 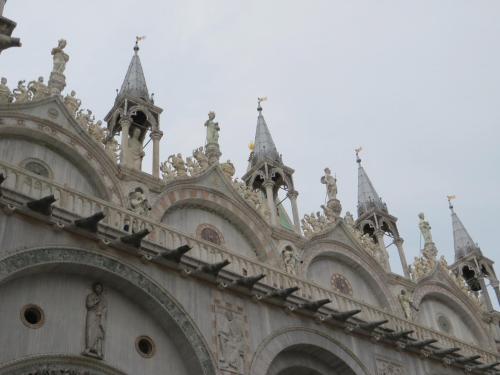 Ornament along the roofline

… and part three, it’s still flaunting the bits of loot stolen from Constantinople in 1204! 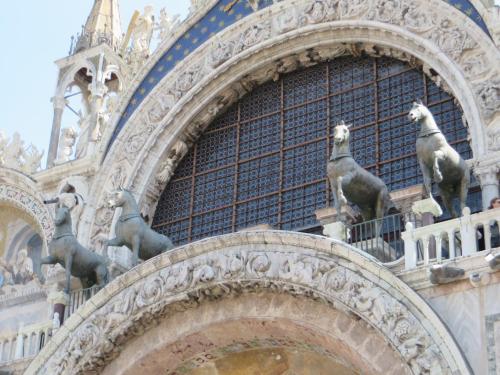 That, at least, is what we thought at the time, that the four horses you see here were the ones famously (in the right circles) stolen from Constantinople in 1204, though probably made in the fourth century; but actually, these are 1980s replicas, with the real ones having been taken inside for conservation reasons, where I’m sorry to say we did not see them! Oh well. The photograph, which is mine, is fun anyway, and the real things are in there somewhere…

It’s easier to make this point with the stuff in the Tesoro, the kind of in-house museum-cum-holy-treasure-chamber. You’re not supposed to take photos in the Tesoro, so really I should not have this…

And arguably neither should they have it, but it is possible, just possible, that this once-personal-possession of Emperor Constantine VII was used as a diplomatic gift at some point and left Constantinople with the goodwill of its erstwhile owners.

The main object here is the Crystal Grotto of the Virgin, and you can see more beyond it, but it’s what’s before I’m interested in…

But the thing in front here is literally the crown of Constantine’s father Emperor Leo VI. When Constantinople fell in 1453, if that had still been in any of the imperial treasuries, it would have stayed there and become part of Sultan Mehmet II’s hoard (NB not ‘horde’; I have known students struggle with this…). No, that left in 1204, or possibly 1261, and either way it’s stolen goods; it was just stolen 800 years ago and the state from which it was stolen doesn’t exist to demand its return any more. Unlike, somehow, Athens; but let’s leave that for now. The point is, I don’t think the Museo have the moral high ground over my photography. Moreover, it’s not even all from Constantinople; some of it is from my study area.

This is complex to explain. The story goes that Doge Pietro Urseolo, having listened a great deal to the advice of a holy man called Romuald, now reckoned a saint, decided that he couldn’t take governing Venice any more and that its politics were certainly literally to damn him, and so one night he fled, with Romuald, and after some excitement ended up at the then-Catalan, now-French monastery of Saint-Michel de Cuxa. There he lived as a hermit till the end of his days, though not without convincing the bellicose Count-Marquis Oliba Cabreta of Cerdanya that his best hope of salvation was the monastic life somewhere serious, sending him off to Monte Cassino in 988. After the ex-doge died, there were miracles at his grave and he also came to be regarded as a saint.1 So perhaps it’s not surprising that the Venetians would want some relic of one of their own who had achieved first-hand proximity to God, not least as he was not the last Doge from the family. But you know the one place on Earth we can be pretty sure Pietro Urseolo did not want to end up? Surely the very one he ran away from, Venice! I suppose, to think properly medievally about this, he must have forgiven them their trespasses against him, or the relic would not have been transportable to Venice; and the same God-must-have-wanted-us-to-have-it argument can be constructed about everything here.2 But still: blimey. I knew about the horses but not this, and it did briefly outrage me.

The far left arcade of the east front; note the statues of the Evangelists as the Tetramorph

Now, even in my outrage I have to admit that a lot of medieval craftsmanship and work went into making San Marco look the way it does.

Near left arcade of the east front, also ornate but in a different way; there’s probably some amazing story of factional competitive patronage here that I was too cross to find out

It’s also rather hard to take in in one bit, and the segmented approach its frontage encourages may even be how it was meant to be viewed, as sequence for contemplation.

Not that there is much time or space for that now!

We are now at last into the actual early medieval bit. This is the head of the nave and some of the crossing, and is probably ninth- or tenth-century, showing that Venice was already doing really rather well out of other people by then

But there is quite a lot of gold. 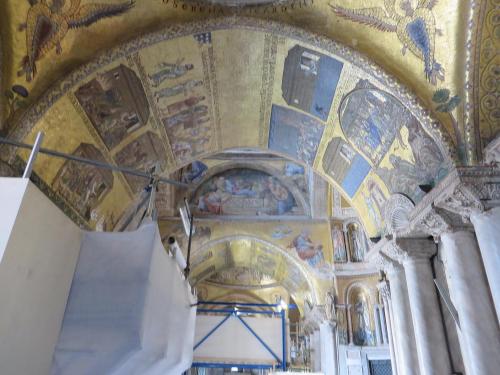 Renovations to gold mosaic in one of the aisles 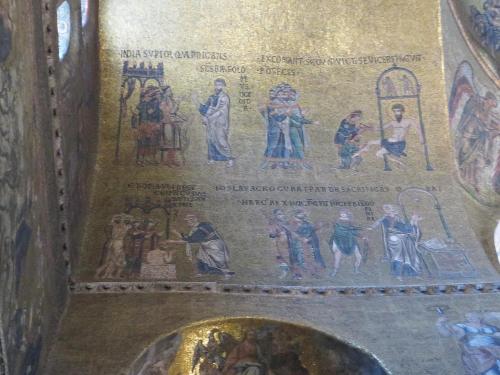 Mosaics of saints in the crossing, again mostly in gold

View across the crossing

But even here, also the spoliation.

And if one goes outside to calm down, or just escape the pressure of gilt (pun intended), although there is some very fine marble…

Marble facings on the south-east corner of the complex; photograph by Dr Rebecca Darley

… what is that sitting at their base, ignored by all but yours truly?

The Statue of the Four Tetrarchs, probably depicting Emperors Diocletian, Maximian, Galerius and Constantius I

Why, it is a statue of four late Roman emperors who ruled, if we identify them correctly, in the early fourth century, about a century before anyone even lived in this lagoon and four before anyone even started planning this church.3 What I’m getting at is, this statue did not start here. Bah.

By this time I was wondering what Byzantine building these had come off, as well

So it was necessary to get away from it all and, sometimes, the only way is up.

This is the Campanile, which is, sort of, San Marco’s bell tower, but is actually a whole separate building and rather newer, this having been put up in 1912 as a reconstruction after the five-hundred-year effort to keep building it higher and bigger finally collapsed in 1902

This is a separate ticket, and it would be quite the climb, too, but thankfully most of it can be done by lift. And this does at least have the advantage that one can then see how the rather confusing structure that is San Marco actually fits together.

San Marco from above, mainly domes

In fact, you can see something of how the whole city fits together.

The Gran Canale, from on high

View across the Gran Canale to San Giorgio Maggiore

I never did work out what this church is that stands out so prominently here; it’s just not as prominent on Google Maps…

And it is very much worth being there and seeing, but crikey, as anyone with Byzantinist leanings, this bit is a little hard to take in places. So we went to some other bits too, but those we can save for another post, and next I’ll insert some more academic content again to keep it worth your actually reading!

2. For logics like this, relics that miraculously became too heavy to move and then changed their mind and so on, see Patrick J. Geary, Furta Sacra: Thefts of Relics in the Central Middle Ages, 2nd ed. (Princeton NJ 1990).

3. For the argument over the identity of the rulers depicted in this statue, see Yann Rivière, “The Restoration of Order to the Roman Empire: From the Tetrarchs to Constantine” in Jean-Jacques Aillagon (ed.), Rome and the Barbarians: The Birth of a New World (Milano 2008), pp. 186–193 at pp. 192-193; he thinks it’s Constantine I’s four heirs, but very few other people have agreed.

8 responses to “The gilty heart of Venice”