I should apologise for the lack of a post last week; the time in which I had meant to write it all went on processing the photos from which I was going to construct it. These were, as you may guess from the subject line, all coins, in fact most of the coins that I selected for the first run of one of the modules I suggested that I could when I applied for the job at Leeds, a second-year option based on the social and political changes of the late antique period in the West as seen through its money. As I originally conceived it, this module was going to work using the collections in the Leeds Discovery Centre but, as you’ve heard, soon after arriving I was informed there were resources as good much closer to hand and so it ran with the materials in Special Collections in Leeds University Library instead. This year I ran it as an MA module instead for the first time, which worked a lot better, but since firstly very few of my students seem to read my blog and secondly, and more grimly, it seems very unlikely we’ll be able to run any modules based on supervised handling of objects any time soon, there seems no harm in dedicating a post to one of its teaching points, which is to what the images I have finally processed most obviously lend themselves.

So, if you ever read much in the way of numismatics and coinage history for the pre-modern period, you may have met the idea that coinage is in some sense state propaganda.1 And one could debate whether that is its primary purpose or whether it’s mainly for ensuring the operation of the economy; but since to be recognised as coin it must identify an authority of guarantee, or else it’s just a round disc of metal, many issuers have indeed used that fact to say something about themselves with their money. Where it gets tricky, though, is when from there we try to extrapolate the public image policy of ancient and medieval rulers. Do we, after all, imagine that modern heads of state choose their coinage designs? Those of us who remember the first UK pound coins will remember that they had eight different edge inscriptions and a different reverse design every year, which was basically anti-counterfeiting and although the designs did have some purposes of eliciting national pride in our great achievements and heritage, I don’t suppose any of us thought the Prime Minister came up with them, let alone Her Majesty Queen Elizabeth II.2 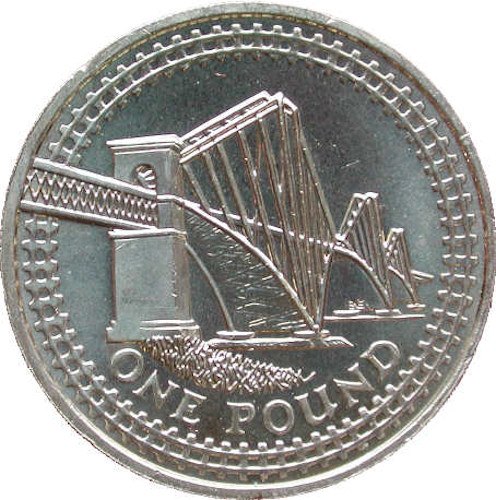 Reverse design of the 2004 UK pound coin, showing the Forth Bridge in Scotland

But when one tries the same argument on ancient or medieval rulers, one finds people weirdly reluctant to let go of the idea of royal or imperial agency. I once had a ten-minute argument with someone in the Institute of Historical Research about the coinage of William the Conqueror and the intended significance of the portrait iconography, with the other party believing that his facing portrait was a deliberate echo of Byzantine imagery which indicated William’s quasi-imperial status as now being a ruler of plural realms, and because they wanted this to be William’s initative they loudly asserted that since the coin bore his image and name, and thus directly touched his reputation, he could not have afforded not to take a personal interest. My counter-argument was more or less, “You mean he really thought he should look like this?”

Silver penny of William I of England struck by Æstan at Winchester between 1066 and 1087, from Tony Clayton’s Pictures of Coins of the UK, linked through for your perusal

Y’see, I believe that someone chose that crown and the facing portrait, which do indeed look like Emperor Justinian I’s coins a bit (see below), but I don’t believe that it had to be William who chose them, still less that it was intended to be portraiture; I think the designs would have been settled at a much lower level, and I don’t think William expected it to resemble him so much as generally to look like the kind of royal or imperial figure wot belongs on a coin. But neither of us had any proof of our positions, which is why the argument went on for so long. And so the question arises: lacking any actual documentation of these decisions, as until the maybe-fifteenth century we are, can we hope to show any case where the decision about what a coin looked like really did rest with the ruler?

A halfway position has been achieved with one or two Roman imperial coinages, which is possible because Roman minting happened on such a scale that there were obviously a great many separate pairs of hands at work in the coinage and there must therefore have been some higher-level direction about what the designs should look like. This gets even truer when plural mints are involved, and long ago a scholar by the name of Patrick Bruun did a careful analysis of one sort of coin of Constantine I, the so-called Gloria Exercitus coinage (The Glory of the Army) focusing on the differences between the mints’ interpretation of the design. I won’t trouble you with the detail here and now, mostly because I can’t remember it, but the point was that only some of the details varied. Therefore, he argued, the things that didn’t must have been in the instructions sent to the mint.3

Copper-alloy coin of Constantine I struck at Trier in 333-334, Birmingham, Barber Institute of Fine Arts, R2959

Actually, the instructions must have been sent to the die-engravers, and they might not have been at the mint—they might even all have been in the same place and the dies distributed once carved, though that would be a bad way to cope with wastage and still avoid forgery—but the basic point holds, that we can see (a) that there were instructions and (b) roughly what they included. Even this, however, doesn’t get us as far as (c) who came up with those instructions. Did Constantine say: “I want a coinage that’s about the soldiers, man, I want to really speak to those guys, let them know that they all together support the unified Empire, so let’s have two soldiers both holding the same standard, it’ll be super deep”, or was it only the first clause or two then some artist came up with the rest and the under-secretary of the Count of the Sacred Largesses or similar went, “That’ll do, send out orders for a hundred dies in that pattern to be delivered in a month”? Can we ever know? Well, there might be just one coinage where we can, and it’s this next one.

You will quickly note that these coins are quite similar. That is true even though they are coins of four different emperors and each struck at a different mint in a different year. Nonetheless, there they are, pretty much indistinguishable except by text. Coincidence? Strong tradition? Well, almost certainly not, because these four all ruled together. They are the four Roman emperors known as the First Tetrarchy, a college of four rulers selected by their eldest member, Diocletian (284-305) to rule with him as delegates in different parts of the Empire. Despite that geographical delegation, their edicts all went out in the name of all four emperors, their monuments often depicted all four of them together even though that probably happened only twice, and, importantly for us, all the mints of the Empire issued coins in the name all four emperors at once.4

The four tetrarchs sacrificing together, on the Arch of Galerius, Thessaloniki, third register down; image by Armineaghayan – own work, licensed under CC BY-SA 4.0, via Wikimedia Commons

The reasons for this are pretty clear if you know about the so-called third-century crisis, a fifty-year run of short imperial Roman reigns brought to an end by a seemingly-endless series of military coups as frontier situations bubbled out of the control of any single ruler: wherever the emperor could not be, there a resentful army appointed their own and the result was continual civil war.5 Diocletian, whose entire military career up to his succession—in a military coup—was spent in this political environment, seems to have realised that the need was for multiple emperors, but not plural emperors as had hitherto been tried, with a ruler’s young son who could be seen as inexperienced or second-best promoted up, but four more-or-less-equally experienced military officers any of whom could stand in for any of the others.6 And that seems to be what their public image was intended to convey: the emperors are all the same, and speak together; if you have one you have them all; they can’t be turned against each other and there is always one to whom you can address yourself.

The four tetrarchs sacrificing together, again, this time on the reverse of a silver argenteus of Diocletian struck at Trier in 289-300, Birmingham, Barber Institute of Fine Arts, R2529

So I wouldn’t like to say, especially given the more naturalistic image on the coin above, that there was a meeting in which Diocletian and the others decided, “you know what we should all have? Beards and really really thick necks, like, unreal necks, OK?” The basic design details might still have been due to someone else lower down the chain, and the key thing might have been that it was easy for most die-cutters to reproduce, so, basic but characteristic. But that the same design went everywhere and every emperor struck the same coins for all four of them in his mints, I think must have been settled in such a conference between the top men themselves, and I would imagine that that being so, they probably did actually approve the designs before the dies were ordered. But this might be the only case where I’m prepared to admit that it really was the rulers’ decision…7

1. You need examples? How about Barbara Levick, “Messages on the Roman Coinage: Types and Inscriptions” in G. M. Paul and M. Ierardi (edd.), Roman Coins and Public Life under the Empire (Ann Arbor MI 1999), pp. 41–60 or Cécile Morrisson, “Displaying the Emperor’s Authority and Kharaktèr in the Marketplace” in Pamela Armstrong (ed.), Authority in Byzantium (Farnham 2013), pp. 65–80?

2. Of course, the anti-counterfeiting didn’t in the end work, which is why we now have the new seven-sided bimetallic ones, but by then people were already trying to solve the problem with lasers, as so often happens nowadays: see Andrew Appleby and Thangavel Thevar, “Identification of British One Pound Counterfeit Coins using Laser-Induced Breakdown Spectroscopy” in Optical Engineering Vol. 55 (Bellingham WT 2016), pp. 044104-1-044104–6, DOI: 10.1117/1.OE.55.4.044104.

4. A good guide here is Roger Rees, Diocletian and the Tetrarchy (Edinburgh 2004), which has a useful appendix of translated sources.

5. Here I like Alaric Watson, Aurelian and the Third Century (London 1999), despite the obvious case it wants to make for the brief reign of its imperial subject.

6. The alternative had been attempted by Valerian (253-260), whose son Gallienus (253-268) did OK until Valerian was captured by the Persians and he had to raise his own young sons to the purple, which ended badly for them. See for an attempt to save Gallienus’s reputation, of which there is now pretty much one per emperor, John Bray, Gallienus : A Study in Reformist and Sexual Politics (Kent Town 1997), an attack on the older Lukas de Blois, The Policy of the Emperor Gallienus (Leiden 1976). Actually, I don’t think anyone has tried to rescue Valerian yet…

7. Actually, that’s not quite true: I’m pretty sure that Emperor Nero chose most of his coin designs, but my main justification for that belief is that he fancied himself an artist and their iconography’s often very clever, which however much I like it as an idea still isn’t proof…