Crusading and a Non-Deterministic Climate

The marking ebbs, and the ability to blog reappears… And for once it is clear what I should blog about, because I said I would pass over Conor Kostick‘s long-ago paper to the Digital Humanities Seminar in the Leeds Humanities Research Institute (which, as every sub-university-level academic organisation must every few years, has since changed its name), and then Dr Kostick himself cropped up in comments encouraging me not to, and so it seems rude to refuse. I admit that part of my initial reservation was that I might have to be rude, but now that I review my notes, even though the paper was called, “Digital Linguistics and Climate Change: a Revolution in the Digitisation of Sources since 2000”, which you can imagine annoying me in several ways I’m sure, I find less to be annoyed about than I remembered, but also less that one might call, well, conclusive. 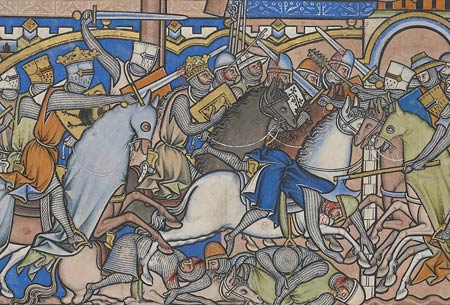 Dr Kostick’s research at this time had arrived at the central theme of his paper from a circuitous direction. Starting with the study of the Crusades, he’d got into digital humanities as a lexicographical way of working out what medieval authors most probably meant by the words they used, which were of course changing as they used them. His example here, an interesting one, was that Archbishop William of Tyre, Chancellor of the Kingdom of Jerusalem already, may have been the first author to use the Latin word classis, classically meaning ‘fleet’, to mean ‘class’, as in first- and second-class, which are ways he divided up the nobility of Jerusalem in terms of tax liability. That wouldn’t have been clear without being able to find all the places he uses and all the places other people do and thus being sure that his is the usage that seems to begin it. This kind of technology lets us get further than the grand old lexicographers of old such as Charles Du Fresne Du Cange; as Dr Kostick put it, “we are standing on the shoulders of giants, with big binoculars”.

From here, however, he had gone via an investigation of crusade preaching and had wound up at medieval climate data, not an obvious transition you might think, but several paths lead there. One is the kind of work that has been, let’s say examined, here before, attempting to correlate major political and social upheavals with climate events; another is the fact that at least one historian of the First Crusade, Ekkehard of Aurach, actually made the association for us, saying that the massive participation in that Crusade was at least partly down to a bad harvest, famine and ‘plague’ (perhaps ergotism, suggested Dr Kostick) in France that meant people with no other hope were willing to sign up with someone with a poorly-realised plan and take their ill-informed chances.1 The problem with many such analyses looking for other correlations, apart from the basic logical one of the difference between correlation and causation, has been poor focus of data, using, for example, tree growth in Greenland as a proxy for harvests in continental Europe, and this Dr Kostick avoided by taking as wide a range of sample evidence as possible. He started with chronicles, especially, using the same text-mining techniques as already mentioned, counting entries mentioning famine, plague and strange weather; added tree-ring data from a range of different areas (assembled by Francis Ludlow); and used ice-core data from Iceland and Denmark for finer dating. It’s a pretty good sample, as these things go, and this obviated many of the objections to such work I’d gone in with. So having done that, what do we then know? Well, the texts make it clear that both in 1095 and 1146, i. e. just before the First and Second Crusades, there were outbreaks of disease, which the tree-ring data suggests often coincided roughly with years of poor tree-growth, and the ice-core data sometimes allowed one to associate these and other such peaks with volcanic eruptions.

(I went looking for a climate data graph to put in here but the amount of short-sighted nature-blaming one quickly finds just made me angry so you’ll have to manage without an illustration between these paragraphs.2)

So case proven? Well, sometimes. It’s certainly possible, especially in the light of Ekkehard, to imagine how such a causal chain could fit together: a ‘year of no sun‘, poor crop yields, famine, destitution, desperate mobility, a convenient casus belli or particularly effective preacher, and suddenly what was meant to be a few thousand carefully-picked troops heading East, probably on the expectation of campaigning on an imperial salary for a few months, has become a horribly underplanned mass movement that winds up changing the world.3 The problem is that the chain doesn’t always work the same way. That works very well for the First Crusade, but in the Second Crusade, the popular participation was nothing like as large, though it was certainly large enough for Odo of Deuil to lament, I’ll admit; still, it was provoked by the fall of Crusader Edessa in 1144, and preparations were well underway by 1146 so I’d have thought that popular uptake is all that the bad year could have affected. Meanwhile, there was another significant peak between these two Crusades (not at 1101, at 1130 or so) which correlates with no such action, and there was no such peak before the Third or Fourth Crusades. Hey, maybe that’s why the Fourth Crusade couldn’t raise enough men, right? But the Third still presents problems. An unexpected result of a bad harvest? Probably not, eh? A 15th-century image of the conquest of Constantinople by the Fourth Crusade, from David Aubert, Livre traittant en brief des empereurs, II, fo. 205r, says Wikimedia Commons where this image is public-domain

Obviously, this paper was never meant to present a thesis as simple and obviously falsifiable as ‘volcanic eruptions caused the Crusades’, but without that, what do we learn from it? Our chroniclers already told us that plague and famine powered recruitment for some of the Crusades, and we didn’t need text-mining to see that. We might, now, understand better where that plague and famine had come from in these cases, but as with my earlier critique of Michael McCormick’s similar deductions about volcanoes, the problem lies in the volcanic eruptions that did not cause crusades, the famines and plagues that were not caused or strengthened by climate events, the crusades that did not correlate with bad weather or famines, and so on.4 No general rules could be extracted from this sort of causation, and neither was Dr Kostick out to present some, but without some such finding, it seemed like a very laborious way to conclude that a couple of our sources were maybe more right than we sometimes reckon. There seemed no question that Dr Kostick and his team had been more careful with data and correlations and even with causation than previous studies, but naturally enough perhaps, that had also limited what they could conclude.

That was my feeling as Dr Kostick wound up, anyway, but questions revealed other doubts and issues among the audience, many of which I thought he actually had good answers to. One of my colleagues argued that climate event references in chronicles are often wrong, to which Dr Kostick wisely observed that this was a good reason to correlate them with scientific data. Other questions focused more justly on causation: Graham Loud has in the past argued, apparently, that a famine which preceded the Third Crusade actually limited response from Germany, and here again Dr Kostick argued that while local responses to stimuli would obviously have varied, the bigger correlations still need explanation when they occur. True enough, but that seems to have been very rare… Well, I certainly don’t have better answers, and if Dr Kostick had been unwise enough to try and push his data further than it would go I imagine I’d have had bigger issues with that, but my feeling remains on this revisiting that his admirable caution robbed the paper of its potential power. The success of McCormick et al. suggest that, sadly, the route to publication of such work is not to care about such things but to push the deductive boat out well beyond sensible recovery, and maybe that’s why this one didn’t (yet?) achieve wider dissemination; it just wasn’t crazy enough!

2. I should clarify that the thing I think is stupidest in these arguments is neither that there is dispute over climate change at all, which I find explicable if dangerous, nor that there is argument over its causation, which is predictable really, but the conclusion that some people who believe climate change now is not anthropogenic reach that therefore we need do nothing about it because it’s natural. I imagine these people largely do not live in the areas most affected.

3. This interpretation of events largely rests on my old piece linked off this very blog, but is similar to that put forward in Peter Frankopan, The First Crusade: the call from the East (London 2012).

2 responses to “Crusading and a Non-Deterministic Climate”