Returning in somewhat subdued fashion to my seminar report backlog finds me still somewhat out of area, as you can probably tell from the title. My tenure in Birmingham as Interim Curator of Coins at the Barber Institute of Fine Arts sort of ex officio made me welcome at the General Seminar of the Centre for Byzantine, Ottoman and Modern Greek Studies in the University, and that welcome was warm enough that I tried, when I could, to get along to the Ottoman papers as well as the Byzantine ones. So it was that on 29th January 2015 I was there to listen to Dr Christine Woodhead give a paper entitled, “Friends, Colleagues and Grand Vezirs: the Ottoman art of letter-writing”, and it had enough crossover with things I’m interested in that it seems worth a report. 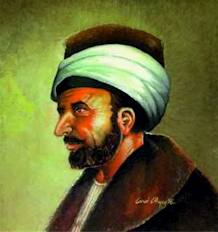 The only portrait of our star, Azmizade Mustafa Efendi, that I can quickly dig up, and I have no idea of either provenance or date, so it could be very misleading but it sets us up, anyway, doesn’t it?

Dr Woodhead was working on a translation of the letter collection of one Azmizade Mustafa Efendi, a senior judge in Ottoman Istanbul who died in 1631, and she was running into many questions arising.1 Apparently Ottoman letter collections are not uncommonly preserved, but like early medieval ones they tend to have been preserved not for historical but for literary interests, as examples of writing to be imitated, making such minor details as date and addresses uninteresting to copy and thus they often have to be worked out from context, not always possible. It also means that the letters that are selected by preservation are highly stylised, often very poetical, fairly formulaic in terms of the emotions that they express or the occasions chosen on which to write (and thus, not least, quite hard to render into modern English that still sounds purposeful). Dr Woodhead argued that these are anyway very valuable sources for outlooks and worldviews, but even as she presented the questions that kept coming to the surface were more basic ones about to whom Azmizade was connected by these letters and when and why they were written.

I really am struggling for images here but, here is another unprovenanced undated portrait that seems to be of the right man…

In particular, there is very little in the collection from after his appointment as qadi in 1614, either to him (much rarer in any case) or from him. Was this because having risen to a top spot the networks of grace and favour which had sustained him thus far were now less important, or was it just that that was when he became important enough for someone to compile his letters as examples (perhaps itself an expression of flattering attention by an underling), or even, did he just start a fresh volume at that point and we don’t have it or it hasn’t yet been found? Answering any of these questions is very hard to do from the collection itself, and so what one winds up wanting is other letter collections from his correspondents so that the missing voices in these exchanges can tell us something to condition and contextualise the literary posturing that is the first thing these letter collections were made to preserve. There were lots of other issues to explore here, such as the genuineness of the emotions expressed (and whether they are naturally filtered by the fact that letters were apparently mainly written to people long distant whom the writer hadn’t seen for ages, whereas a more jovial tone might have been used to a friend easier of access), but these seemed so familiar from what reading I’ve done about Carolingian and, actually, Byzantine letter collections that it was nice to be reminded that as we’ve suggested before sometimes the early modernists are really not facing anything very different from we medievalists, even in a world where all could be thought to have changed between the two periods.2

1. Setting up this post has let me come across C. Woodhead, “Circles of Correspondance: Ottoman letter-writing in the early seventeenth century” in Journal of Turkish Literature Vol. 4 (Syracuse 2007), pp. 53-68, online in preprint here, which suggests that perhaps not all of these were new questions to our speaker.

2. For my home period and area my stock references are Mary Garrison, “‘Send more socks’: on the mentality and the preservation context of medieval letters” in Marco Mostert (ed.), New Approaches to Medieval Communication, Utrecht Studies in Medieval Literacy 1 (Turnhout 1999), pp. 69-99 and Matthew Innes, “Practices of Property in the Carolingian Empire” in Jennifer Davis & Michael McCormick (edd.), The Long Morning of Medieval Europe: new directions of in early medieval studies (Aldershot 2008), pp. 247-266, but really the wellspring for both of them and also cited by Dr Whitehead is Margaret Mullett, “Writing in Early Mediaeval Byzantium” in Rosamond McKitterick (ed.), The Uses of Literacy in Early Mediaeval Europe (Cambridge 1990), pp. 156-185, which joins up the circle quite nicely I think.