Books and coins in Blackburn

Having been sadly recalled to the present, it now seems safe to retreat again to the past, and specifically 9th and 10th November 2017, when I was in Blackburn by way of a favour for someone who often features on this blog, Dr Rebecca Darley of Birkbeck, University of London. A further chain of favours and persons hangs thereby, and the story of how I or any of us came to be there is a little complex, but it can be told fairly briefly and involves a conference and some coins, so is definitely the kind of story this blog tells. So: it begins with an industrial ropemaker in the town of Blackburn by the name of Robert E. Hart.1 Hart was quite the collector, especially in the field of manuscripts and early printed books but also of Roman and Hellenistic coins, and when he died in 1946 he left most of his collection to the people of Blackburn as, as he had put it, “something for my native town”. And there, in what is now Blackburn Museum, those collections largely remain.

R. E. Hart, in a much-reproduced portrait here borrowed from and linked through to Wall Street International’s page about the permanent exhibition at Blackburn

It took a while for them to come to notice, however. In the proceedings of this conference, Dr Cynthia Johnston explains how their cataloguing in 1962 led a thin trail of scholars, one by one, north-west to see the various things which interested them, and in 1976 some of the manuscripts were exhibited, but it was really only when Cynthia herself got involved in 2012 that a momentum built up.2 By the time I made it to Blackburn to see any of this stuff there had been two exhibitions and two conferences, all in London where Cynthia is based, but this was the first event that had really been possible in Blackburn itself.3 This was the running order (and where the papers occur in the proceedings, I’ve given a reference).

Obviously, this is not really my field for the most part and there are only limited comments about the actual papers I can make here; if I don’t mention them all, it’s not because the ones I don’t mention were any less interesting, it’s just because my notes don’t now let me give a fair account. My notes make it look as if I was especially struck by Eric White’s painstaking detective work in tracking down fragments of books now scattered about various European libraries after being dismembered to serve as bindings for later books, which he described as basically a habit of 1550-1650. The best example he gave was a 1459 Psalter printed in Mainz, which went through 56 editions and which we have in bits of 70 copies; all but 10 of those bits are binding waste…11 Emma, of whose work we’ve read here before, introduced the Winchester Cabinet in the Brotherton Library at Leeds to this audience as a kind of parallel to Hart’s collection. Rebecca’s paper was (as you’d expect me to say) excellent, and focused on the learned networks into which Hart’s coin collecting, as revealed by the notes in his ledgers and papers that are still in the museum, propelled him and the numismatic world in which he thus took part. Lastly David McKitterick rang numerous bells of recollection for me by linking Hart’s activity to a wider world of industrial collecting, already gestured at by several other speakers but here explored, even if through the medium of books, by reference to many other collectors, some of whose coins I’d worked on in my time at the Fitzwilliam long ago; it seems as if it was pretty normal to acquire both manuscripts and coins in this world. In the proceedings of the conference, Rebecca explores this world still further with some really interesting reflections on the civic identities and local pride which explain why these collections actually exist where they do to be used, and Cynthia also does a more holistic take on the world of book-collecting in which Hart so thoroughly took part.12 And the exhibition which went with all of this made very clear what a richness there was to display, and included a small display of some of Hart’s coins with some of his books and study tools, as if he’d just stepped away from the desk for a minute to check something and would be back when he’d found it. 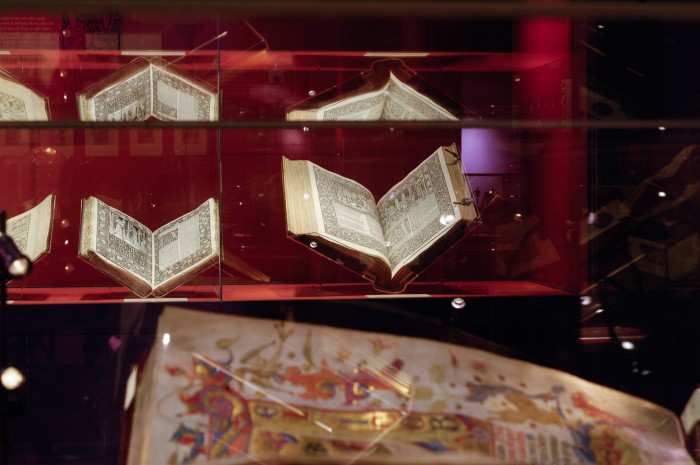 Manuscripts from the Hart Collection in the Blackburn gallery

But, you may reasonably be asking, where are you in all this, Jonathan? You wouldn’t be blogging it unless there were something about you, now, would you? And I might, actually, but this time that’s a fair cop. You see, as part of the activity around the exhibition, the Museum had been able to get money together for a refurbishment of its major gallery and the construction of a new study space above it (as well as, for a short while at least, the salaries of the staff necessary to make any of this stuff available…). And so, the evening before the conference, there was an open evening for the new study room, with handling sessions available with some of the collection objects. Rebecca had been asked to do one of these sessions with some of the coins—because the Blackburn collection of coins is rather bigger than just Hart’s stuff, and includes some really unusual stuff such as a decent-sized and basically unknown collection of Sasanian Persian drachms—but she was teaching that evening, so asked me if I could do it. And so a few weeks before I’d come up, had a rather whistlestop introduction to the coin cabinets and nominated my four pieces, and then on the evening in question I was set up with a table, a tray and some handouts, and basically made myself available to anyone who wanted to check out some old coins.

This kind of work is always fun and it’s possibly the second thing I really miss from the museums world (the first, I admit, being the unfettered access to the treasure troves of stuff). Coins are such an excellent teaching tool, because (for now at least) everyone’s used to using them and thinks they know how coins work, but they often don’t read them in any depth, so by confronting people with coins that aren’t quite familiar, but can be read, you can teach them not just about the era of the coin in question, but also of a new way to look at the material culture of their own lived world as well. The four pieces I picked were a London bronze of Emperor Constantine I from after his supposed conversion showing the Unconquered Sun, a teaching point of which I never tire, a Canterbury ‘PAX’ penny of William the Conqueror (also one of my stand-bys), a Lancaster halfpenny token of Daniel Eccleston (there being no actual Blackburn tokens I could immediately find, alas), and the above. The above is probably the most interesting piece of the bunch, not really being a coin as such, and having a very specific context: as my handout has it,

“During the English Civil War which ended with the capture, trial and execution of King Charles I by the forces of Parliament in 1649, a number of royal outposts were besieged by Parliamentary forces, very few of which could be relieved. Money was among the supplies that did not reach the defenders, forcing their leaders to cut up silver plate and ornaments to make coins with which the restless troops could be paid. Newark was besieged three times during the war, but never fell; this coin survived from the final siege between November 1645 and May 1646.”

It drew a lot of interest because of its shape, of course, and kept it when I told the story that goes with it, but I probably still shouldn’t have used it! It was only afterwards, you see, that I did a cursory search and found that, of course, because such pieces are fantastically rare given how few were issued and how briefly, its probable market value was a full order of magnitude greater than any of the other three. But we were careful and everything was still on the tray when we closed, and perhaps, indeed, we might have relied on that same pride on the part of the visitors in their native place and the collections belonging to those who belong there. As Rebecca’s paper explores, these things get complex. Anyway, it was all great to be part of and got me into a collection I’d never have known about otherwise, and with which I’m still trying to come up with a way to work in future. Who knows but what this may some day come off, and if so, of course, you’ll hear about it here.

2. See Johnston, “Introduction”, p. 2; for that exhibition, see J. J. G. Alexander and P. Crossley, Medieval and Early Renaissance Treasures in the North West (Manchester 1976), and note how the title sort of implies that it needs specifying that these things are not in London.

3. Publications resulting from the earlier ones were C. Johnston & S. J. Biggs (edd.), Blackburn’s Worthy Citizen: the philanthropic legacy of R. E. Hart (London 2013), C. Johnston & J. Hartnell, Cotton to Gold: extraordinary collections of the industrial North West (London 2015), T. Burrows & C. Johnston (edd.), Collecting the Past: collectors and their collections from the 18th to the 20th centuries (Abingdon 2019) and C. Johnston, Holding the Vision: collecting the art of the book in the industrial North West (Blackburn 2020).

4. The printed version being Morgan, “The Blackburn Psalter and the William of Devon group” in Johnston, British Book Collector, pp. 23-59.

9. See Potten’s own report of the conference here.

10. Printed as McKitterick, “The Loyalties of a Collector” in Johnston, British Book Collector, pp. 7-21.

12. Darley, “The value of the past: heritage between local, global and national” in Johnston, British Book Collector, pp. 213-228; Johnston, “Book collecting in context: Hart and his contemporaries”, ibid. pp. 191-212.