Building states on the Iberian frontier, II: clearing the land 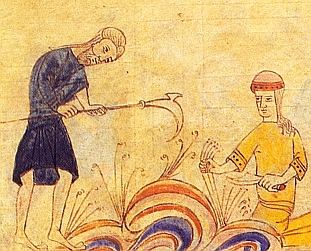 Catalan peasants at work, from the Biblia de Ripoll

Continuing as promised, or threatened, the rethink of my picture of frontier development in Catalonia spurred by the recent chapter by Julio Escalona and Francisco Reyes on the same themes in tenth-century Castile… let’s talk about peasants.1 At some level, after all, the expansion of settlement, social structures and government into an unorganised zone requires the basic work of somebody taking tools to the soil, felling unhelpful trees, clearing scrub, putting it to the plough or planting helpful trees and generally turning the land to use. This is implicit in any story of territorial expansion that isn’t simple annexation of territory where someone else has already done that. The question is thus not whether this is happening, but rather who is controlling it. Now, I have worked on this for Catalonia, partly because it’s just inherent in an expanding frontier situation as I say but also because of an early article by Cullen Chandler that I disagreed with and which gave me a fair bit of work to figure out what my alternative picture was (and even longer to publish it).2 This does mean that I could simply direct you to that work but because it’s part of the argument that I’m developing here in reaction to the Escalona & Reyes chapter, it needs to be out where it can be seen. I will reuse some text, though, and the first bit I will reuse is that from my book which attempts to describe how other historians have answered this question of control. Given that what follows is quite a lot of quotation, and that the whole post is plural thousands of words, a cut seems moot here… END_OF_DOCUMENT_TOKEN_TO_BE_REPLACED