This was the longest day of my attendance at the International Medieval Congress at Leeds last year, not just because of it ending in the dance but because it was the only day of the conference where I went to four sessions before the evening. I guess that for some of you this will be more interesting reading than for others, so, varying the usual pattern, here’s a list of the sessions I went to and their speakers and papers, then a cut and you can follow it up if you like!

1107. ‘Foul Hordes’: the migration of ideas and people in Pictland and beyond

1310. Texts and Identities, IV: violence, legitimacy, and identity during the transformation of the Roman world

If any of that piques your interest, then read on! If not, hang about till next post and we’ll talk larger-scale Insular funerary sculpture instead. END_OF_DOCUMENT_TOKEN_TO_BE_REPLACED

So, Tuesday of Leeds then. I am going to try, though we all know how well this usually works, to keep this shorter than the previous one. I seem to remember that I didn’t sleep very well the Monday night for some reason, but having some years ago discovered that the best way to enjoy Leeds was not to drink as much as I had been doing up till that point (because it was all free, folks),1 I was still on time for breakfast, where the queues weren’t as bad as last year, but still bad enough to make me wonder how on earth this campus copes when it’s got 1,500 students in it instead of 650 medievalists. Thus fortified, I stepped out and my day’s learnings were as follows.

501. Ritual and the Household, I: Anglo-Saxon Settlements 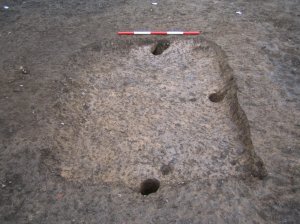 614. Languages in the Early Middle Ages: travel, contact and survival

This one had been a highlight of my planned itinerary, because in the original program Luis Agustín García Moreno had been going to talk about the end of the Gothic language in Spain, and since he is a grand old man of the field I was looking forward to seeing him speak. That said, even in his absence the session was still fascinating. I love listening to linguistics, though I find it awfully dull to read, so this is a good way to make sure I’m faintly aware of lingustic agendas in my stuff. I wasn’t the only one who wasn’t deterred, either; the small room was so full that people like Rosamond McKitterick were sitting on the floor for shortage of seats! These were the papers. 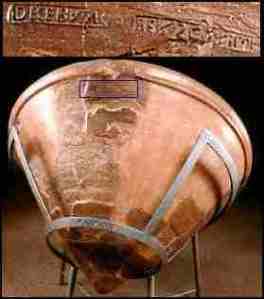 Then there was lunch and I think it was at this point that I first got bitten by the books, having worked out that actually I could afford to buy from Brepols this year. This is a dangerous realisation. Still reeling, I took refuge in diplomatic… 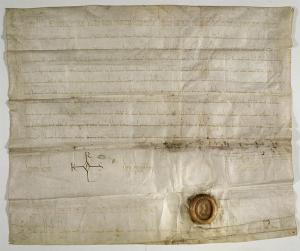 Precept of immunity from King Charles the Simple to the canons of Paris, 911 (genuine)

Schoyen Collection MS 590/49, a sale charter of 965 from Cerdanya; you will observe how it does not resemble Charles the Simple's document much... 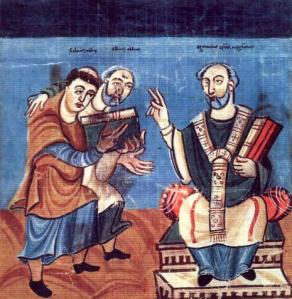 I confess that I had been keeping away from Texts and Identities thus far, not out of strategy as sometimes in the past but simply because many of the paper titles looked like postmodern junk. (And you know, I’m more tolerant of that than I used to be, but really.) This one however I chanced because Stuart Airlie was responding and one’s Leeds is not complete without seeing him perform at least once. The actual papers to which he responded outshone their session title, too, and were as follows.

There were then questions, in which Professor Reimitz got a chance to explain how Frankishness could be class-based, religious, judicial or simply ethnic and how in each of these categories a given person might think of themselves as something else, even though Frankish in whichever was most immediately relevant for the source.

Once the initial flurry was done Dr Airlie stepped up to take turns with Ian Wood in summarising and responding to the whole subthread, most of which of course I’d missed: Dr Airlie emphasised that the field has changed a lot in twenty years, that the big questions are now irrelevant and subtleties are in, that we are now Elvis Costello not Ozzy Osbourne (to which I say, speak for yourself mate, I’m Hawkwind).3 Professor Wood in turn pointed out how rooted in the war, and not mentioning it, the historiography they were celebrating the retirement of had been, and how ethnicity had been so hijacked between 1914-45 that it had ceased to be a topic anyone could look at. He could have gone further with this, in fact, as one of the problems I think people who work on historical DNA have got is that they appear to be resurrecting ideas of race that we had managed, politically, more or less to bury in the welter of scholarship, that indeed Professor Reimitz had just exemplified, showing how fluid ethnicity was in the early Middle Ages. The DNA guys look dangerously to some people, I think, as if they want descent to explain everything, and it’s partly because of that, though also partly because of how much easier to follow it is, that strontium isotope analysis is becoming so much more important.

Dr Airlie also argued for the rethinking of Rome and the abandonment of the term ‘Byzantine’, although since he was using it again next day he may only have been flying a kite with the latter. Wood’s closing point was that we are now looking at all kinds of texts, which is great, but that we consequently forget that really, the overridingly most important, most reproduced and most read in the early Middle Ages was the Bible, which is largely missing from traditional scholarship where it should be centred. As Airlie then responded, the most important identity for anyone in this period who owned it was still ‘Christian’. (I would probably contend for ‘patronus‘, ‘paterfamilias‘ or indeed ‘man’ myself, but you know, if that had been important people would have written it down more, right? Right?)

Anyway, that was that for the day, and then I think it was this evening that Another Damned Medievalist insisted on buying me dinner for various reasons, for which I must thank her, and we sat outside the Stables pub getting spattered on by the weather until a table inside became free and then a convivial gathering formed. Things got a lot more confusing once I’d made it back to Bodington, but that’s not your problem and it wasn’t really a problem for me either. The night ended in good spirits and the next day will follow in due course.

1. I should say, I don’t think this is increasing maturity, I put it down entirely to the ceasing of the Utrecht Medieval Studies department’s receptions and my consequent lack of Jenever intake.

2. Here thinking most obviously of Barbara Rosenwein’s classic, To be the Neighbor of St Peter: the social meaning of Cluny’s property, 909-1049 (Ithaca 1989).