Completely off-topic! One day a little while back when I was feeling unsually despondent, I also happened across what appears to be a completely false report that Cambridge University Library is seeking commercial sponsorship, now removed from the Guardian‘s website. This reminded me of something I’d been meaning to do for ages, ever since the UL’s car-park re-emerged from the mysterious building works that had shrouded it for several months. When it had re-emerged, it had done so with a new cycle lane across the front of the building, and a pillar system keeping the cars back from it. The pillars are really cool.

It wasn’t until I read a story in the local newspaper that I realised this was not just a bright idea from inside the UL, but a ‘new public artwork’. There are fourteen of the pillars and the central four, which bear the title (“Ex Libris”), rotate, so that you can line them all up and read it. 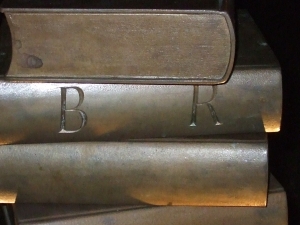 One of the central pillars of Harry Gray's Ex Libris

Well, possibly a bit pretentious but still rather handsome, I thought, and resolved to photograph it for the library fans reading. Unfortunately, I then let the summer slip away—I just don’t normally take a camera to the library, what can I say—meaning that by the time I got round to this as described above, I was no longer in a position to get to the library in daylight. Well, I don’t think this has necessarily spoiled anything… END_OF_DOCUMENT_TOKEN_TO_BE_REPLACED