I’ve just had a look through my seminar notes from March 2019 and decided that two still bear the telling. As ever, it is good of those who still read here to bear with my efforts to reduce the backlog in the face of the fact that things continue to occur meanwhile… But back then when my backlog is, at the beginning of the month I was present on the 4th when Professor John Moreland addressed Leeds’s Institute for Medieval Studies Medieval Group with the title, “Sheffield Castle: archives, excavations, and augmented reality, 1927-2018”, and then I was around again on the 27th when Dr Helen Birkett addressed the IMS Medieval History Seminar with the title, “News, Current Events, History: The Preservation of News Texts from 1187/8”. I’ve got no way to tie these together except that they were in the same month in the same university and I saw them both, but why should we need more, eh?

So to begin with Professor Moreland’s paper, I have to admit that I did not previously know that Sheffield had had a castle. But there was one, and a recent bequest had enabled the University’s then-untroubled archaeology department to start a partnership up with the contract organisation Wessex Archaeology (who for reasons unexplained have an office in Sheffield) and the university’s department of Computer Science, to go over the work that had been done on it and try to synthesize the results of old and new digs. The castle has been dug quite a lot, apparently, being located, under what was between the 1960s and very recently the city market, by an amateur archaeologist in the 1920s and then dug for a decade, with some more work on its perimeter in the 1950s and new work just beginning at the date of this paper. The paper was as much about why what had been done had been done as what it actually was, but the basic story was that some kind of castle was probably put here in the 12th century by one William de Loyelote, built up rather with a gatehouse after license was given to crenellate in 1258, and then possibly burnt in a sack of the city of 1266 by a man really genuinely called John De Eville. There was some rebuilding thereafter and it was still a going concern in the 16th century, and indeed in the English Civil War though perhaps not going enough as it fell to siege in 1644 and 1646 and was slighted in 1649-1650. 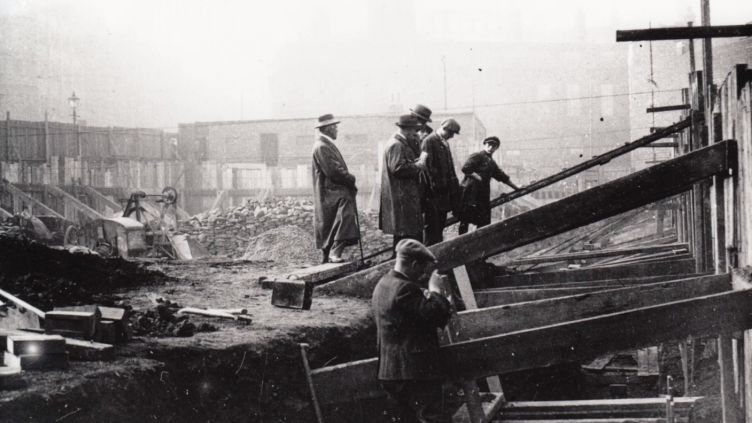 Archaeological digging at the site of Sheffield Castle in the 1920s, 1930s or 1950s – sadly, Sheffield’s website doesn’t say which

The question that now arises is what bits of this actually survive. The 1920s-30s digs found lots, and some of that was photographed in situ, very luckily for such old archaeology, but that archaeologist, Leslie Armstrong, tended to date what he found from known history, such as the 1266 burning, so that various wooden structures showing destruction by fire he considered to be pre-1266 and everything above them to have been the 13th-17th-century building, which Professor Moreland though would likely prove wrong given the relative depths of stratification. In that case, this fire must have happened earlier and the 1266 sack of the city may not have hurt the castle at all. Another point of difference was over the material that Armstrong considered to have been ‘Saxon’, an alleged cruck-built building in the central courtyard and some of the material culture. Professor Moreland, however, thought that there was no pre-Conquest material at all, and that Armstrong was just after pushing his native city’s origins back to when it could be ‘Germanic’ rather than ‘French’, this mattering rather more in the atmosphere of the 1930s, though not always that way round… The oldest remains Professor Moreland had been able to date were late 11th-century, at which point there seems to have been a Norman motte with maybe a wooden gatehouse. But by this stage he had five minutes left to talk, so we didn’t get all the details of that I might have wanted, and the promised ‘augmented reality’ ironically never materialised, then or now. However, you can find out more! Wessex Archaeology have a good web-page on the digs, including their 602-page site report which, I admit, I didn’t read for this post (or at all), and a video by Professor Moreland explaining what the augmented reality stuff would have been like.1 Also, not very long after this paper, there emerged a book, so it is certainly possible for you to learn more.2

Dr Birkett’s paper was a very different sort of thing, not just because it completed within the time allowed but also because it was a proper old-fashioned text-mining medievalist study, which as I only now find out, had already been published at the point when she gave it to us.3 The object of the search was to find out how people in the West found out about the recapture of Jerusalem by the forces of Islam, under the famous Saladin, in 1187. We know that it created enough of a furore that eventually King Richard I of England, King Philip II Augustus of France and Emperor Frederick I Barbarossa all went out to try and get it back – but how did the news actually get to their royal ears?

Obviously, the answer was probably letters, but what I hadn’t expected was firstly that we would have any such letters surviving, and secondly where they turn up. These were surprises because actually, there are 13, but none are actual autographs by people of 1187; instead, such texts were later copied into chronicles and histories, or just copied; we have some loose copies which got used as bindings, and one rather mystifying copy of a letter from Patriarch Heraclius of Jerusalem (the Latin patriarch, despite his name) that now survives in the Arxiu Parroquial of Cardona, of which town we heard only a couple of posts ago so you know it’s in Catalonia. In fact two such letters made it to Catalonia, but it doesn’t seem to have raised the same response as other places… But from the image I was pretty sure it was a local copy – I know the scripts! – so there was a kind of response even so.

But that is a whole book’s worth of study and for someone else. Better questions to ask might be, as did Alan Murray, of course present, whether multiple copies of such letters were being sent, or whether one was sent and then copied for dissemination, and Dr Birkett thought the latter. There is a particular one by a Templar called Terricas (apparently) which exists in more copies than any other, and Dr Birkett thought that the actual man’s journey westwards to seek help could be tracked. I don’t, myself, see why that precludes him fetching up in, say, Genoa, and then writing his letter and having copies sent hither and thither; but of course, I haven’t seen it, and either solution does explain why what we have is not the original letters, and reminds us that in this era (and to be honest, our one too) a letter only arrives because someone or a chain of someones physically brings it; that process also attracted questions, but answers are hard to provide. Dr Birkett herself was more interested in why these texts were still being copied up long after they were ‘news’, because outside the chronicle texts the preservation rarely seems to have been part of a plan; their homes were often blank folios in manuscripts made for other purposes. It is possible that, since Jerusalem was never recaptured (unless we count Emperor Frederick II’s attempt, which because the Church judged him to be a bad guy we seem never to do), this was ‘news’ that never got old. But the samples are very small, and I was myself wary of any generalisation of plotting trends of 2-4 manuscripts. But the questions are still interesting to ask, and maybe there are more answers to be found.

That will have to do you for this week. Next post will be some more current news and then I have an old musing that never before got written up about the role of the blog in/as scholarship, so please stay tuned for those, and if that’s not enough I hope to have more critique of a certain historian of early medieval military matters ready to go after that, surely therefore something for all tastes. Stay well and safe till then!