Given that I am on strike, you may be wondering where the promised blogging that usually happens here during the UK university sector’s repeated and lengthening industrial action is. Ha! Little do you know that I have spent the last two days crafting 8,000 words of prose on the UK higher education situation, which was originally intended to be three posts here and is probably actually eight. I’m still undecided as to whether to write it all up for here, or to try and fling it somewhere else as an op-ed, or of course both, short version elsewhere and full version with footnotes here. It could still happen! But meanwhile I thought you might like something more academic, while still political, to chew on, and that takes me back to just before the Ankara trip just mentioned, to early November 2018, when for reasons I would not have forecast a few months before, I was in the Houses of Parliament. 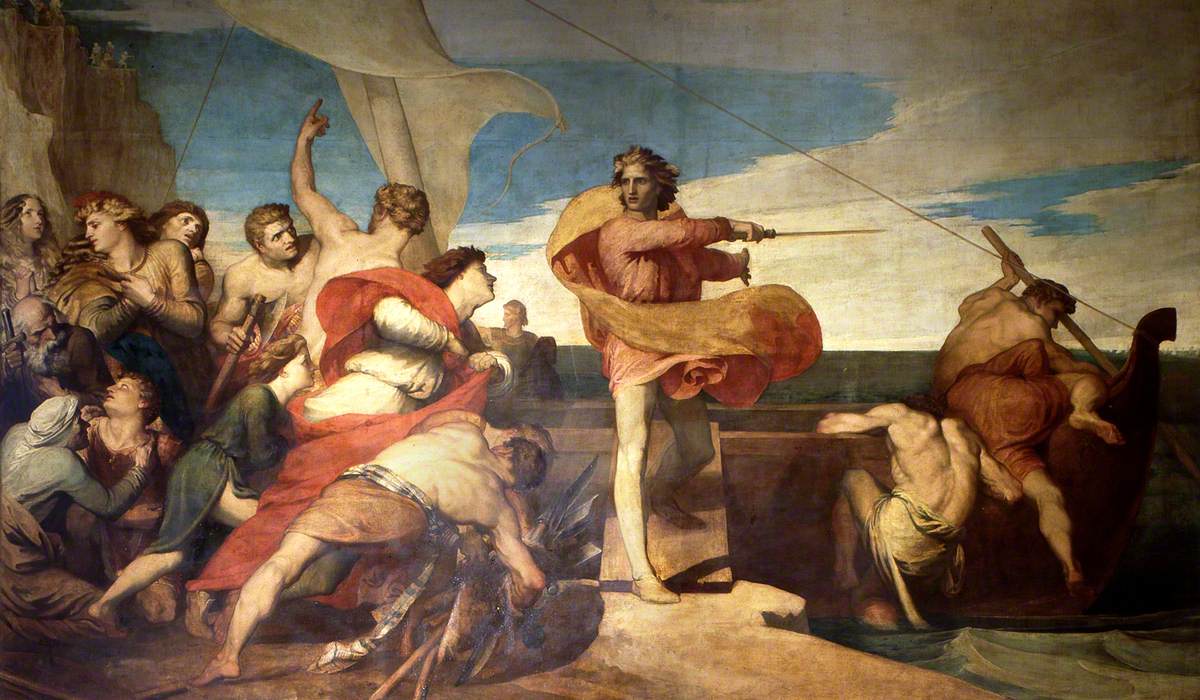 The reasons for this are Aristotelian in complexity of causation. The material cause was of course that I had gone there, through quite the myriad of security checks and into the room (whose name I have sadly forgotten) where the above painting hangs. The formal cause was Professor Simon Keynes, who was delivering a lecture there, and the final cause was that lecture, entitled, “Edward the Confessor, Westminster Abbey – and the Cult of King Alfred the Great”. But the efficient cause was the unpredictable element, it being the election to Parliament some months earlier of Alex Burghart, sometime research worker and still-frequent commentator on matters early medieval because of having done a Ph.D. on Mercia back in the day. Once inside the House, while clearly also busy with quite a range of other things, which have led to him becoming the country’s Minister for Skills, no less, he seems to have lost no time in arranging what was supposed to be a series of lectures on the history of Westminster Abbey and the Houses of Parliament, for which there is apparently a small endowment. (The lectures have continued, but thanks to the pandemic, a bit discontinuously.) And so he decided to start with the founder of the building, and that’s what Simon was there to do.

Westminster Abbey was founded by King Edward the Confessor, or so the regular version goes. But as Simon’s painstaking (but not painful) exposition of the documentary evidence went to show, while not everything that has been written giving the place a greater antiquity can be trusted, there is a clear reference to the abbey already in a 993 document of Edward’s predecessor-bar-three, Æthelred the Unready, which you see above, and possibly even an older one from 986. There is also a burial of circa 1000 in a reused Roman sarcophagus that was recovered when the Houses of Parliament were built, and in questions Alex pointed out that according to Edward’s charters the abbey apparently held most of the old trading settlement as endowment, which Tim Tatton-Brown pointed out meant that it must have postdated the establishment of the new port so could not be much earlier than Æthelred anyway. Edward’s contribution was presumably therefore a rebuild and reestablishment on new rules, which can be seen in the architecture and his own charters, as well as in the Bayeux Tapestry (see below); the association with Edward is not in doubt, only exactly what its nature was. However, as Simon concluded, while Edward is much commemorated in Westminster Abbey, the Houses of Parliament, which in the 1840s replaced the old Westminster Palace after a disastrous fire, commemorate him very little; there is just one statue. Instead, when they go back before the Conquest they tend to commemorate Alfred the Great, as above. Victorian England wanted heroic fighters, not peaceful saints, in their legislature’s decoration!

Scene from the Bayeux Tapestry showing Edward the Confessor’s corpse being carried to rest in Westminster Abbey, public domain via Wikimedia Commons

The thing is, by then that was not surprising. To get to the lecture, once through the security, the select but quite large party had had all to pass through the Royal Gallery in Westminster Hall, which is hung with quite amazing frescoes of great moments in British history, as selected by that same Victorian agenda. These involve, as you might expect, quite a lot of conquering, some missionary conversions (including of the English themselves, but then later other peoples around the British Empire) and many victorious battles. The wider architecture of Westminster Hall is also quite amazing. I have borrowed the below picture from a travel blog that has many more, and it gives you the idea but believe me, you want to see the rest too, so do click through. 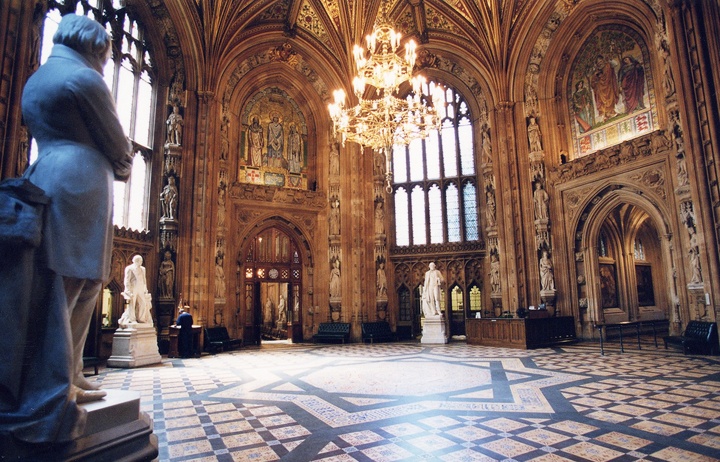 The octagonal Central Gallery in the Houses of Parliament, where the Commons and Lords meet

It was amazing to see it all, though much of it is open to the public at the right times, so it’s not as much of a privilege as I might make it seem. (Drinks afterwards in the Pugin Room and talking to Michael Wood for the first time in a decade or so, that was a privilege, I will admit that.) But it does also make me reflect. This is the working space of the people who decide the fate and direction of the country, and with them affect those of others. Given that’s their daily commute (for those that go into the House daily, I suppose) and the site of what in other places would be the water-cooler or kitchen conversations, I couldn’t but remember how separated from the real world three years teaching in an Oxford college made me, and wonder what working in Westminster’s actual buildings does for the sense of normal human life enjoyed by our legislators. I don’t see how one could maintain humility without a struggle. The jeering you see on Parliamentary TV presumably hasn’t that much to do with this environment – I imagine its architects were hoping for more ennobling effects than that – but the environment can’t make anything seem more, rather than less, real. There’s probably a serious role for these lectures just by way of establishing that we do have means and tools for deciding what reality is, or at least was!