The Three Orders’ Houses: a model on the ground

Somehow I was out doing things yesterday and forgot to write a blog post, sorry, but for once I do have time in the week, so I will make it up now. 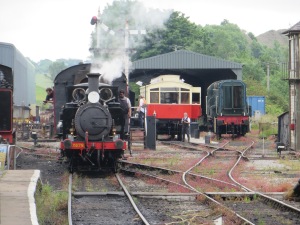 What your blogger was looking at yesterday instead of his computer

Here is something about as delayed as even my various crazy backlogs can make something. This was prompted by reading something in the British Library in 2012, back when we could do that thing, and in my notes on it I even then made a note to blog about it; but I didn’t in the end process those notes until late 2017. At that point I laid down a stub to complete later, and now, four years on, here we go. All of this is ironic, because in 2012 I was for once reading something pretty new from Catalonia, an intriguing piece of settlement archaeology discussion by the medieval archaeologist to whom perhaps I owe the most favours in the world, Professora Imma Ollich i Castanyer, about the Catalan monastery of Sant Pere de Rodes.1 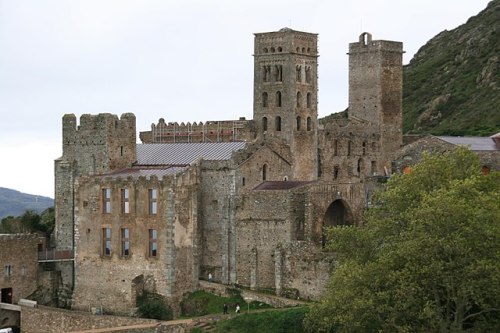 Sant Pere de Rodes from its most impressive side, which is to say, the one that’s mostly there; image by Pixel – own work, Public Domain, via Wikimedia Commons

Now, that is an inaccurate over-simplification that I should immediately correct. The article, like much of Professor Ollich’s work, is mostly about my favourite study area, the comarc of Osona, and it is a fairly major argument with a basic paradigm of the social history of the tenth and eleventh centuries. This holds that, however you like to explain it, rural settlement in Catalonia was mostly dispersed and only loosely territorialised in the tenth century but by the end of the eleventh had nucleated into reasonably-defined villages. The favourite explanation hitherto has been feudalism, of course, working either through violence compelling people to group together for safety or through aggressive lordship pressing people together to intensify their farming, around either churches or castles depending on the agency, and no, neither of those are completely logical chains of events as I’ve laid them out but for some people they make sense, even now the proponents of those ideas are dead.2 This process is usually referred to as incastellamento, as coined by Pierre Toubert who first observed it in Lazio, is not yet dead and has in recent years suggested that he was probably partly wrong, or encellulement, as coined by Robert Fossier so as to get away from a dependence on castles, and it has been very widely played with, debated, contested and challenged, at least outside Catalonia.3

But this is the scenario on which Professor Ollich’s observations land like a series of well-mannered munitions. She argues that, once you have a decent picture of this area’s, and therefore quite possibly any nearby area’s, settlement patterns, it’s way more diverse than just dispersed or nucleated. She winds up developing a typology that has seven categories, including settlements around churches, settlements around castles, settlements with both (like Tona, where I have of course been and been photographed) and settlements around neither, the first three of which can be split into ones where the settlement predated the supposed focal point or points and ones where it didn’t. Only two or three of these seven types conform to the dominant paradigm, so even if it turns out still to have been numerically dominant, which Professor Ollich doesn’t think it was in Osona, that paradigm at least needs to give up some room to alternatives. It’s one of those arguments that makes such clear sense that once you’ve read it it’s hard to go back, and is a welcome attempt to provide something in place of the theory one’s out to demolish. 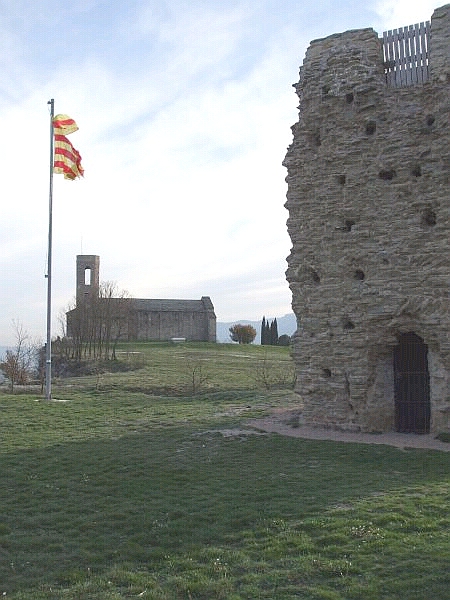 Sant Andreu de Tona and the Castell de Tona, as made a tiny bit more famous by my book

But, despite its importance, that isn’t the thing that I thought, nine years ago, I should blog about. That was Professor Ollich’s final example, which is, as promised, Sant Pere de Rodes, out in coastal Empúries way to the north-east. She picks on Sant Pere because it gives her several of her types of settlement in close proximity and shows how an obvious focal point doesn’t necessarily do what the paradigm expects to settlement development. The monastery was first here, and its tangled history is more than we can go into here; suffice to say that there is an argument about whether, as its documents claim, it was founded in a wasteland location or if it was deliberately sited on Roman remains instead, and of course it could probably be both and curious treasures have allegedly been found there that might provide more esoteric explanations and we could go on. But right now I shan’t; you just need to know that in the ninth century someone started a monastery there, in the tenth century some of the local counts decided to make it their pet monastery and by the eleventh century it was, as they say ‘kind of a big deal’.4 But it didn’t ever pull a village round itself. Instead, a village that was almost certainly related grew up somewhere quite close by, at Santa Creu. It was then fortified in the eleventh century, so looks like an independent effort, but its major market and lord must still have been the monastery. Furthermore, there was also a local castle, eventually, at Verders, and that had its own church so could in theory also have gone it alone. But because they were all here they perhaps prevented each other from becoming the major force in the locality. The Google Map below sows them in relation to each other. In the end, the monastery, the oldest, was also the longest lasting, but then it was also way rich, at least for a while, so perhaps that isn’t surprising.

Now, apart from the neat demonstration that the basic model just isn’t complex enough to handle the actual variation of human activity, and the encouraging thought that nonetheless we might still be able to build an adequate one (this is a big mantra of mine these days), the obvious thing that struck me here is that it’s a settlement archaeology demonstration of that old eleventh-century trope about medieval society being divided into three orders, those who fight, those who work and those who pray. Because, look, here’s where they all lived: a castle, a village and a monastery! It should have been the perfect arrangement, at least for someone like Adalbero of Laon. As it is, I imagine they actually disputed with each other like cats and dogs, and that our records would (if Sant Pere’s charters hadn’t mostly been lost) show that the Church mostly won even if it actually didn’t, but the point is, here they all are, almost as if it was real. That is very definitely not the theory Professor Ollich set out to address, and I don’t mean to make any claim that my observation actually, you know, means anything, but once I’d thought it I had to say it, even if I do so nine years (and one day) late…

5 responses to “The Three Orders’ Houses: a model on the ground”