Looking Back on a Ferment of Frontier Ideas

I am on holiday today, more or less at the order of my top boss, the Vice-Chancellor of the University of Leeds who has mandated two extra days’ leave for all of us because of the hell-year we may at some point be able to say we survived. Let us not right now look at the implications of reducing the working days of a workforce whose work is itself not diminished, but instead let me take the chance between bouts of much-delayed house-cleaning to see if I can’t knock out another backlogged blog post. Looking through my old papers, I find that if we stick to the programme of events from 2017, pretty much the next thing that I did of importance after the trip to Lleida was the first of a series of events connected with the two grants I was then holding, and in particular a workshop from my Rethinking the Medieval Frontier project. This was tremendous fun, but it’s also something I already wrote about at the time, as part of the publicity work for the project itself. So there is already not just a blog post for you to read about it, but the actual digest of the meeting I sent round the group afterwards; and if you are yourself deeply concerned about frontiers I think those are still worth a read. But, I could also say something here that catches some of the interesting ideas that didn’t make it into the other post or the digest, so I will.

The masthead of the Rethinking the Medieval Frontier website, one of my Catalan photos showing, as it happens, Sant Bartomeu del Grau viewed from Sant Andreu de Gurb

Before I do that, rather than make you read a whole separate blog post to find out what this one’s about, it seems reasonable at least to describe the nature of the event. Basically, it was the classic academic talking shop: get the best people you can think of to discuss a theme into a room together with coffee and pastries, having first given them a prompt to think with in the form of an agenda document, and let rip. When things flag, add lunch, then more coffee and carry on. Finally, take the survivors out for Thai food, bid them goodbye and take all their ideas home to cackle over and plot with! My notes from this are an interesting thing to try and decode, because I knew I was going to have to sum up and try to bring the group into consensus about what to do next in the second part: as well as some kind of record of what was being said, they have my spider-trails of connections between asterisked points, which I must have been adding live, and additional marginal scribbles in capitals of things I wanted to throw back into the discussion later. And, as I say, there are things in there which didn’t get taken forward but which are still worth laying out to look at. But first, I should identify the speakers. In order of appearance in my notes, we were:

So that was the team: what did we all come up with? Well, for the summary of that I can best direct you to the other post and the digest, but here’s what you might call the bonus tracks. Had you ever thought about these questions and ideas?

Given the number of ways these and the other questions we were working with could be answered, I both do and don’t understand one of the other things which kept coming up in these discussions, to wit the question of whether we as historians (and archaeologists) could do what I’d declared as the mission of the project and actually generate ‘theory’. I was by a long way the most optimistic about this, but I don’t see why. Obviously we had a lot of difference both in questions and answers, but if by some awful situation we’d been compelled to come up with a 5,000 word-statement of our agreed findings, it was pretty clear what it would have contained; that’s where the digest came from. Isn’t that theory, then, given that it was not empirical findings about any one place alone? 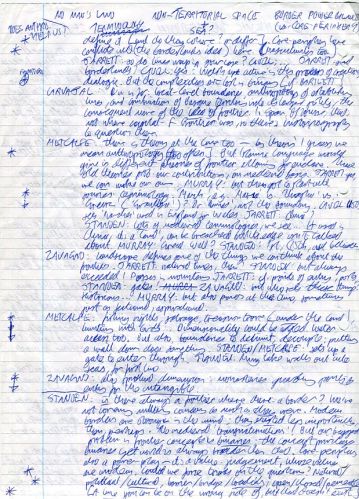 The most I could push my learned colleagues to was that we might generate some models, but what is theory but an assemblage, not even a very big one, of models? When I think of the really big-name sociologists and anthropologists whom medievalists like to use, very few of them, if any, worked collaboratively and they usually didn’t have more than one study population (although, while maybe only Pierre Bourdieu was explicit about also using his own society as a comparator, I think they all did that as well).2 We had about ten different study populations across eight centuries and most of the Northern Hemisphere, and were collaborating to establish commonality and usefulness; that looks like a better basis for theorisation to me! We’ll cheerfully steal those people’s ideas, or those founded on nothing but white male intellectual self-reflection, but we don’t believe we can make our own.3 And yet, look at the other blog post and the above. A roughly consensus set of answers to some of those questions would be theory all right, surely. And that is still what this project, if I get to pick it up again, is aiming to produce: some actual theory about how frontiers work in non-state, non-industrial, low-tech contexts that might be surprisingly applicable in other places, maybe even the ones we’re in now…

1. For example, the noble spymistresses located in Emma Cavell, “Intelligence and intrigue in the March of Wales: noblewomen and the fall of Llywelyn ap Gruffudd, 1274-82” in Historical Research Vol. 88 (Oxford 2014), pp. 1–19, about a version of which you can read here.

2. I suppose I am mainly here thinking of Pierre Bourdieu, ‘The Forms of Capital’, trans. Richard Nice in Marxists Internet Archive, 2016 online here, but for more on the relevant theme, see Richard Harker, “Bourdieu – Education and Reproduction” in Richard K. Harker, Cheleen Mahar and Chris Wilkes (edd.), An Introduction to the Work of Pierre Bourdieu: the practice of theory (Basingstoke 1990), pp. 86–108. What little I myself have done with Bourdieu has at least been frontiers-related, in the form of Jonathan Jarrett, “Engaging Élites: counts, capital and frontier communities in the ninth and tenth centuries, in Catalonia and elsewhere” in Networks and Neighbours Vol. 2 (Binghamton 2014), pp. 202–230, about which you can read and maybe already have read here.

3. Not that there isn’t stuff to be done even with Derrida’s most self-polarised thinking, as witness Sarah Stanbury, “Derrida’s Cat and Nicholas’s Study” in New Medieval Literatures Vol. 12 (Turnhout 2010), pp. 155–167, about a version of which you can read here, but when I think how much I see done by medievalists with Derrida, as opposed to say, the Chicana female socially-based reflection of Gloria Anzaldúa, Borderlands / la Frontera: the new Mestiza, 4th edn (San Francisco 2012), I do wonder whether the fuss is just about his genius and maybe not at least slightly because he ‘seems’ like a secular intellectual authority figure whereas she ‘seems’ like a marginalisable spiritualised anti-racist protestor. Maybe even ‘shrill‘. Anyway. Probably I have a lot to learn. In fact, certainly. Whether it’s about this, we’ll maybe someday see.

5 responses to “Looking Back on a Ferment of Frontier Ideas”