The first time I ever had to teach about Byzantium, I think for a lecture on the Crusades in 2009, when I knew almost nothing about it, the iconic image I wanted to use was the land walls of Constantinople, the six-kilometer-long fortification that more or less kept the Queen of Cities safe from fatal attack for around a thousand years. I think this is the very picture I used then.

That section, as you may be able to tell, has been fairly thoroughly restored, but there’s a lot more of the old walls left than have been so treated, and one of the things we wanted to do on our visit was go and see some. We did this on the same day that we visited the Chora Museum, because that got us up into the right general area of the city, but by then we’d already got the idea that Istanbul’s long history of re-use meant that its old walls could turn up in surprising places. 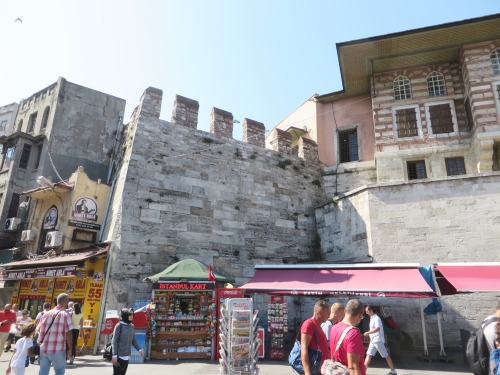 The sea-walls are pretty patchily preserved, however, and in any case less extensive. The main circuit of both sea and land walls was built by Emperor Theodosius II in 439, but pretty much every set of owners of the city had to patch or modify them every other century or so, and with a chronology as long as Constantinople’s that’s still a lot of patching.1

View of the inside of a ruined tower on the land walls, showing quite a few bits of patching just here

Now, I had originally had some idea that the areas where the walls were might be quite fancy, I suppose because London’s is, but actually I should have reasoned differently, that where 1500-year-old masonry meant to withstand epic sieges is still in your way, no-one but the state does expensive building. The standard building strategy in these parts is instead to squeeze into tiny spaces whatever can be built on the cheap, and where we found ourselves was, while not perhaps rough, definitely poor and not really selling to foreigners. (We can’t have been the only tourists it had ever seen, though, because one very very small café had in its window the plaintive cardboard sign, “No wifi, just tolk to each other” [sic], which is, to be honest, a message for the age.) Anyway, I guess what I’m saying is that if you go to look where we did, you may like us be glad that we were a group, however unfair that was on the local populace.

One class of local inhabitant had already decided that safety lay in grouping up, indeed… These bins were close to a fishmonger’s, so I will admit that the group may have been pretty spontaneous.

I was looking at quite a lot of masonry from previous eras on the way up and wondering if we’d found walls, but the member of the party with the knowledge kept assuring me that we’d know when we reached the actual walls, and she was not wrong. 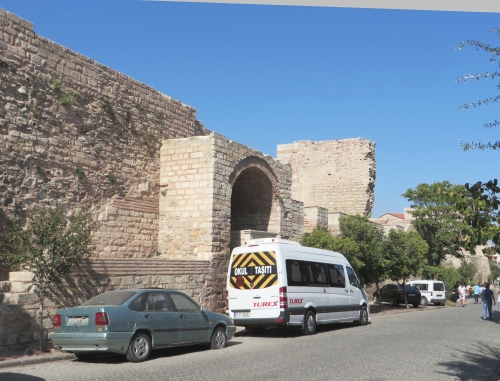 With a bit of poking around on Google Maps I have recovered our location at this point, which was about here:


This is not one of the parts of the walls where much maintenance has happened; they’ve been made safe, but there’s definitely no access to what’s left of the towers, which is in some cases quite a bit. 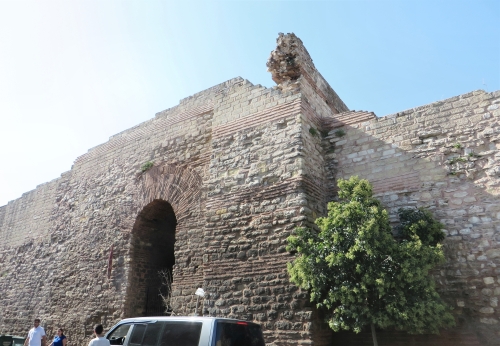 Lower storey of a gate tower on the inner wall, up the road

On the other hand, the walls are also right there, forming the edge of the street, or at least their inner circuit is, and because the area has seen quite some demolition, modification and general don’t-care bodgery, sometimes you can get through to the outer circuit from the inner side. I mean, OK, some people have made sure you can’t because they can…

Opening into a private courtyard built between inner and outer walls, into which I was dissuaded from intruding, but doesn’t it look grand?

But we found our way through in a recreation ground that had been laid out in the space between inner and outer walls, where a small group of teenagers regarded us with dark suspicion as we poked around.

Wishing to leave them in peace, we did little more than get to where we could actually touch the outer wall from the inside, which was pretty cool. 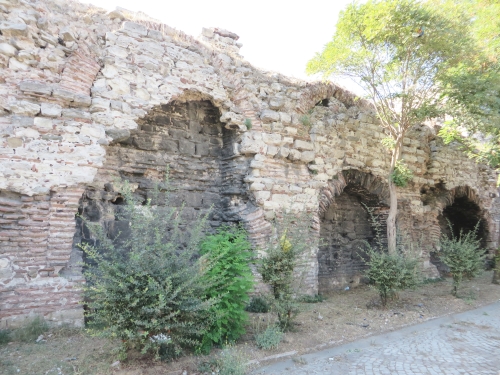 Close-up of that same wall

But that would be the general theme of this bit of the town: the past is there all around you, but sometimes it’s just in the way and you need to get through it… 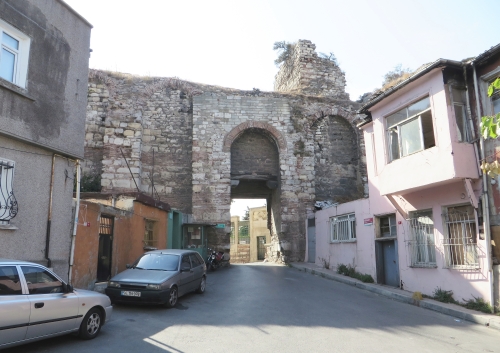 Road pushed through a postern gate

Now, as it turns out, if we’d done a bit more research we could have found more impressively complete bits of fortification really very close by, and in fact, I have an actual picture of the back of what turns out to be a small thirteenth-century survival from the imperial palace of the Blachernae, which I didn’t realise, using a section of the inner wall as its rear one, and I photographed it mainly because of what seemed to me to be a bodged-on garderobe. Here the demolition and re-use that supported this building was in fact Byzantine, though, because Emperor Heraclius extended the circuit of the walls to enclose the new palace, leaving these remains to become part of it, but whatever he built has now gone under this Palaeologan refurbishment.2 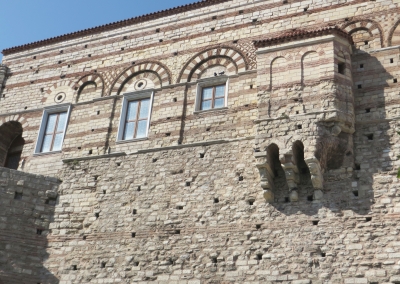 Waste disposal and re-use in one picture, which turns out to be of the rear of the Tekfur Sarayı Müsezi

So if you’ve just followed my advice and visited the Chora Museum, there is an alternative and more touristic itinerary one could follow here. But actually, I think we probably saw something more like the actual city here by doing it this way…