Istanbul I: trying to give a sense

The UK’s university lecturers are back at work, albeit on Action Short of a Strike, and the dispute goes on, but from now on you can find out about it from the press, rather than here, and a more sadly normal posting schedule will have to resume. Still, I can start with the now-legendary Something Completely Different, as the one thing I didn’t mention in the previous round-up of what I was doing in July through September 2016 is that at the very end of it, I was on holiday in Istanbul.

The Galata Tower and a mosque I can’t identify, seen from the Golden Horn, Istanbul

Now, those of you with very particular kinds of memory may be able to look back through all the disturbance since then and say, “wait, hadn’t Turkey just had a coup then?” Which indeed it had, after our tickets were booked, and we thought hard before going anyway, but it was a good idea. The city was half-empty, everything extremely safe and every single waiter and restauranteur very glad to see us. This was my first trip to an Islamic country, to my shame, and in fact my first east of Vienna, but also of course it was a trip to the second, and then only, capital of the Roman Empire, so for this medievalist half-turned-Byzantinist it was really quite the experience. I took an absolute ton of photos. By careful filtering and brutal selectivity I’ve got it down to probably only eight blog posts I want to write, but I thought that that might still get a bit samey if I did them all together. So I thought I’d intersperse the more limited other content I have for the period between these photo posts, and thus we come to the first one, which is just an attempt to give an impression of what impression I got of this marvellous confusion of a city. [I should add here that I got quite a few details wrong in the first release of this post, so if you got it like that by e-mail and have come here to correct me, sorry, you were not the first…] 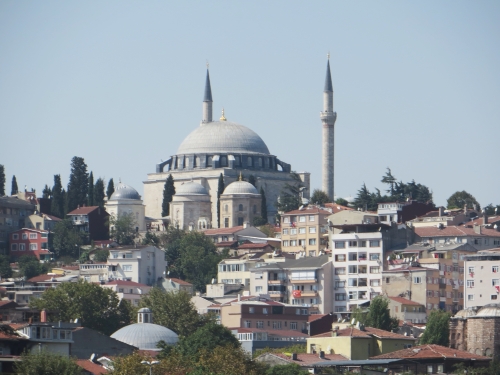 A different mosque with seashore houses before it, on the other shore of the Golden Horn

I suppose, to start with, perhaps unsurprisingly, one of the things that struck me was that there are mosques everywhere.

Mosques alongside Ragıp Gümüşpala Road, alongside the Golden Horn

But after a while one begins to think one’s seen this one already, and then you realise that there was obviously a bit of a building program (which turns out to have been carried out in the sixteenth century) and that actually even this limited uniformity was just a moment in a much longer historical passage on which the city is still engaged.

An unidentified surviving buttress for a building that didn’t, off the Hippodrome 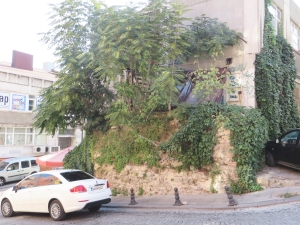 And when you look for it, there’s evidence of this collision of pasts on almost every corner. In some spaces this is fairly nondescript, and indeed quite hard to date. It’s sometimes easy to guess that what you have here—as with several of the mosques—is Ottoman Turkish building fairly deliberately, or just necessarily, sitting on Byzantine foundations, but not to guess whether this was effacement or just repair.

But in other cases, and especially down in the space that once held the Roman imperial palace and the Hippodrome, this competition with and for the monumental impact is very much more obviously deliberate.

The Hagia Sofia, once the imperial church, lit at night, from the Hippodrome

The Sultan Ahmet Mosque, Istanbul, also lit at (the same) night, facing the Hagia Sofia (or Ayasofya) across the Hippodrome

The thing is, while it’s obvious enough what happened here—if you finally capture the capital of what was once the world’s greatest empire, it certainly says something to take their greatest church and turn it into a mosque, but after a while maybe what it says is that you’re still living in their ruins, so you want to build a bigger and better one of your own, and the jury will forever remain out on whether Sultan Ahmed I succeeded here—what’s not so obvious, if you see it only in terms of Ottoman conquest, is that the Romans or Byzantines had previously more than a millennium competing with their own past in this same space, and the Ottoman additions are sitting on top of all that too.

Two obelisks in the Hippodrome

The best place to show this is probably in the Hippodrome. This was, once, the imperial sports stadium, where the emperors came to be seen by the crowd, which sometimes went badly badly wrong but of course mostly didn’t.1 And down what was the middle of it there remain several monuments, including two large obelisks, as you see above.

One of these, this one, is possibly a Byzantine construction, though the only hard thing we know about it is that Emperor Constantine VII, much beloved of this blog, had it repaired during his reign.2 But the other is really not, since its granite faces beg to inform us, in hieroglyphs, of a victory of Pharoah Thutmose III in about 1450 BC.

So what, you might justly ask, is it now doing standing in Istanbul’s premier public space? Well, the base on which it sits makes that very clear. To be more accurate, it used to make it very clear and is now quite worn but we have a good early modern transcription, but there is much about it that is still clear anyway, like this imperial ceremony probably in the very same Hippodrome where this base’s burden was being stood up.

One side of the base. I’m being quite vague on detail here partly to save time—it’s late in the UK as I write and I have an early start—but also because these monuments all currently have really good Wikipedia pages, which will tell you more than any caption I can write here

The inscription on the lower register, now very hard to see, makes it clear that this was the work of Emperor Theodosius II (402-450). He is not now much known for his big interventions but nonetheless, here it is, and I bet his people noticed when it went up.3 The thing is that he hadn’t brought it there, that had been done by the (re-)founder of the city, Emperor Constantine I, after whom it is named.

Lower registers of the base of the Obelisk, one face anti-clockwise from the previous shot, and clearly much patched and adapted

So by the time Theodosius was raising this obelisk, this kind of reuse or appropriation was already an old tradition here. The very man who turned this once fairly quiet if tough Greek city into a new imperial capital, Constantine I, reportedly filled it with sculptures from pagan temples, of which a lone one, known as the ‘serpent column’, now survives in situ.4 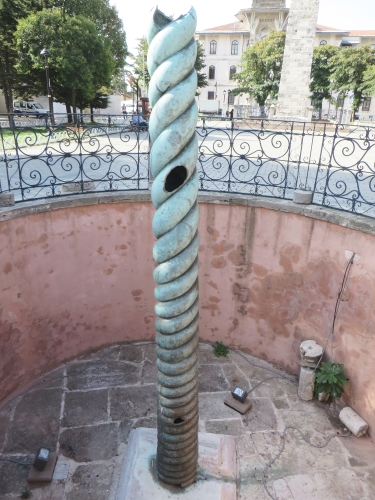 It used to have three snakes’ heads at the top; one is now in the Archaeological Museum, on which I’ll write later in the sequence. Constantine’s biographer, Eusebius, says that all this spoliation of pagan statuary was part of Constantine’s earnest dedication to his new faith of Christianity, but I’ve always wondered: if what you’re doing is founding a new, Christian, capital, is what you do really fill its biggest public space with all the best pagan ornamentation you can appropriate? Or is the sense of that more that you’ve brought all the gods here? Eusebius obviously had his reasons, writing hopefully for Constantine’s tetchy but very Christian sons, for emphasising Constantine’s own dedication to the faith that would keep those sons employing old Eusebius, but others have felt it necessary to wonder.5 In any case, the point is: from the beginning, this city was constructed by laying claim to others’ older glories. By the time the Ottomans got into that sport the game was 1000 years old.

Despite being kind of ruinous in places, this is still a city that is very conscious of being the centre of something very big and also very old. The fact that any corner may bring you face-to-face with a building that’s a millennium old but still being lived in must do that for you, I guess. And it’s continued to pile up history and far from everything here is even as old as Ottoman. 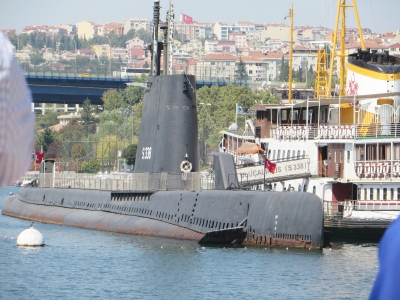 Looking newer than its launch date and older than its retirement, this is TCG Uluçalireis, which served as part of the Turkish navy between 1971 and 2000, but was born in 1944 as the USS Thornback, and sank Japanese ships in the Second World War. This particular monument brought her history with her in a slightly different way, I guess…

But however modern or not, it’s all sitting on ground and moving down water- and road-ways that already had centuries of stories travelled into them when this new ‘it’ happened to coincide with those paths already taken. This kept striking me as we moved around the city, and it struck me as the thing with which to start.

5. Eusebius, Life of Constantine, ed. and transl. by Averil Cameron and Stuart G. Hall (Oxford 1999), is the place to get the story now, and there is a huge pile of writing on Eusebius and his agenda but the classic is maybe still Timothy Barnes, Constantine and Eusebius (Cambridge MA 1981). On the question of conversion, insoluble but much vexed anyway, see maybe Raymond Van Dam, “The Many Conversions of the Emperor Constantine” in Kenneth Mills and Anthony Grafton (edd.), Conversion in Late Antiquity and the Early Middle Ages: Seeing and Believing (Rochester NY 2003), pp. 127–151.

16 responses to “Istanbul I: trying to give a sense”