Is it him or is it me? Accuracy, disciplinary expectations and Borrell II

I know I’ve made this point by now, but because I, like many other UK academics, am still on strike today, you can have another blog post, because if I were working I could not do this and would have to squeeze time out of Sunday to blog instead. This is another thing I first wrote in mid-2016, when I still had time to read, and as you will see it promises further instalments. In fact, I never wrote those, because the experience I describe below did not improve, but I think it still raises some questions that are worth thinking about, not least, “what should I have been reading instead?” Anyway, here it is, in the unaltered voice of 2016. 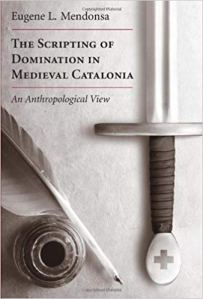 I have read pretty much what there is to read on Count Borrell II of Barcelona by now, as anyone who has hung around this blog for a while would expect, but I have been trying while writing the story of his life to patch any gaps even so. Into this window of opportunity has wandered a book I first heard of when it must have been very new, The Scripting of Domination in Medieval Catalonia: an anthropological view, by Eugene L. Mendonsa.1 The preface to this was free on the web in 2009 or so, and I showed it to my anthropologist of resort to ask whether it seemed sensible to them. After all, I repeatedly talk down medieval historians for using outdated anthropology and ignoring newer stuff; if an anthropologist has written a book about exactly my study area and period, I should not be ignoring it! My referee thought that from what she could tell it seemed OK, and so eventually I found a copy at a price I didn’t mind, bought it and started reading it. This post was occasioned, as it will seem by the time it gets through the backlog to go up, by my reaction to the first substantive chapter.

It would be mean to say that the first chapter makes me wish I’d not spent the money, but it is surprising to me in a number of ways that are probably justifiable without being mean. The book sets out in the preface explicitly to use anthropological thinking to understand how élites in medieval Catalonia kept themselves that way by the social and symbolic structures they created to impose and to justify domination. You can see why this sounds exactly like something I need in my toolkit. However, to go about this the author does a really extensive recapitulation of the political and social history of the area of Catalonia, skimming the Roman, Visigothic and Carolingian periods and getting down to detail in the comital era and proceeding on to the civil wars of the fifteenth century, in three lengthy chapters. In the first chapter at least, no anthropology is cited at all, and while there is analysis along with the narrative it’s derived fairly straightforwardly from historians’ work. I can’t see from a quick skip ahead that this changes much in the subsequent two chapters either, and these three historical ones are together 165 pages of a 226-page book, all in.

So in some sense this is exactly what I wish people would now do, which is use the medieval period as material for new historical anthropology. On another level, however, it is not how we normally do history at all. Some of that is a matter of presentation. There are no footnotes or endnotes, for example, just a list of references at the end of each chapter. That might be OK, and all the things I’d expect to see there in English are there although far far fewer in Catalan or Castilian. However, the text is peppered with quotations, and there’s no way to link these quotations to the works in the reference lists. I’m pretty sure that’s not standard academic practice in any discipline.

Also, lots of it is just factually wrong. Some of that is by virtue of not knowing the disciplinary conventions, I admit, and some of it is because our author likes to come up with snappy phrases for things that might make handy shorthands to a lay audience while looking very odd to medievalists; he refers to ‘Sword Power’ a lot to mean rule by force, for example, which is dramatic to the point of oddness but not wrong in a factual sense. But there is factual error too. The bit that made me choke most was to see the phrase, “Charlemagne’s other son, Bernard of Septimania”; I have no idea what you have to read to get that impression but I very much doubt it was in any of the works in the reference list.2 But when he gets to the sack of 985, our author disappears into a fog of error:

The disaster hit during the reign of Count Ramon Borrell (948-992). Most of the inhabitants were either killed or enslaved. The count fled into the Pyrenees.

The failure of the Francian kings to help the count of Barcelona fight off the advance on the Marca Hispanica of Emir Al-Mansur caused the count to turn to the powerful Cluny Monastery for political support and then to become a vassal of the Holy See.

Al-Mansur died in 1002 and the threat passed. Nevertheless, ties to the Franks had been effectively severed and Count Borrell looked more to Rome during the remainder of his reign…”3

I’ll just knock these out:

The real pedant in me also wants to point out that Borrell II ruled from 945 to 993, but that might again be unfair; most books you could find that even mention him don’t realise that the date of his death has been corrected in local scholarship, and fewer still date from his documented first use of the comital title rather than the death of his father.9 However, since Professor Mendonsa also gives his dates as as 954-992 later on, when he talks of him issuing the first known charter in Catalonia (he means franchise charter, which is almost OK) and then has him in a genealogical table as “Ramon Borrell II, 966-992”, the date apparently because of his brother Miró dying in 966 but the rest hard to explain, it’s really not just lack of currency with local scholarship that’s the problem here.10 The big question is going to be: can an argument emerge, in the twenty-seven pages of the book dedicated so to doing, that still works when the historical foundation it’s set upon is so full of holes? How much about events does one have to know to be able correctly to diagnose social processes? If Professor Mendonsa does in fact have insights that seem good to me, will they be in any way safe to use, given not least that a historian going back to this book from my citation will likely be just as horrified by these errors as I am? These are questions which I suppose I can only answer by finishing the book, and I will, but I’m not sure, all the same, that this is a fair reflection of what anthropological approaches could do with this material…

8. Jonathan Jarrett, “Caliph, King, or Grandfather: Strategies of Legitimization on the Spanish March in the Reign of Lothar III” in The Mediaeval Journal Vol. 1 no. 2 (Turnhout 2011), pp. 1–22, DOI: 10.1484/J.TMJ.1.102535, again obviously not available when Professor Mendonsa wrote, but it’s not as if I was using unknown evidence.

3 responses to “Is it him or is it me? Accuracy, disciplinary expectations and Borrell II”