An awful lot of numismatists in Sicily, II

So, after that bit of numismatic self-congratulation, let me take you back for the last time to September 2015 and the town of Taormina in Sicily, where I was then one of many gathered for the 15th International Numismatic Congress. You’ve seen some of the local antiquities, heard about the first two-and-a-half days of papers and visited a local castle, now it’s time to return to the thick of the academic fray. But first, a party!

Indeed, the first thing on our calendar after descending from Castelmola and eating was not an academic session but a party put on by the Medieval European Coinage project, to celebrate its resurgence into activity since the previous INC in the form of the publication of the series’ volume on the Iberian Peninsula and the near-completion of that on Northern Italy (which, much though I often doubted it, has in fact now also emerged, something I should probably announce separately too).1 By now you may well not remember that I am a part of that project still, but I am, so I was there to share in the glory. There were speeches, there was a strictly limited quantity of free wine, but mainly there was a superb setting.

It was a good way to wrap up the day. The next day was the last day of papers, however, and with certain obligations among them, and so for once I was up and ready right at the beginning. Here’s how it all unrolled.

I was in this session more for the people than for the material, I admit, since both Alberto Canto and Vlastimil Novák have crossed my reading or museum work before now, but the material was also interesting, of course. The Valencia hoard was 1374 coins running from the Umayyad period in the Iberian Peninsula through to the taifa era, abouut 850 to 1090, but its largest component was Fatimid quarter-dinars from Egypt, Africa and, especially, Italy (though singleton Visigothic and Byzantine gold coins were also among it, perhaps weirdly; I asked if it was weird and got two different answers…). The most common mint was the one local to where we stood, Siqiliya, and that certainly was unusual and possible illustrative. The Polish hoard was the second one to come off its site, the former one having been dispersed except for one coin in 1936, but in so far as can be told both were almost entirely dirham fragments, dating from c. 750 to the mid-tenth century, which is how these things seem to occur in that area. The debate here was over when they would have been cut up; were they travelling as wholes and then divided or were people actually importing fragmentary coins into Poland? Someone popped up here saying that silver in Muslim Spain was very often cut in circulation, because no-one trusted the copper coinage; I wasn’t sure about this, as silver and copper don’t easily match market values even when broken down. This turned out to be very similar to the hoard Dr Novak had to tell us about, however, except that that was a mix of Islamic and German coins, and more the latter; any silver coins would apparently do, alonsgide jewellery bits and bobs. We think of hacksilver and cut dirhams as a Viking phenomenon, often, but that kind of economy was apparently more widespread.

Then, after coffee, I had to scoot across town to show due team support for a member of the All That Glitters team who was presenting for us in the biggest room in the whole Congress, with my old colleague Martin Allen (pictured above) chairing. It was actually more or less impossible for any of the speakers to know who was there till afterwards, given the lighting, but this was who was at the front: 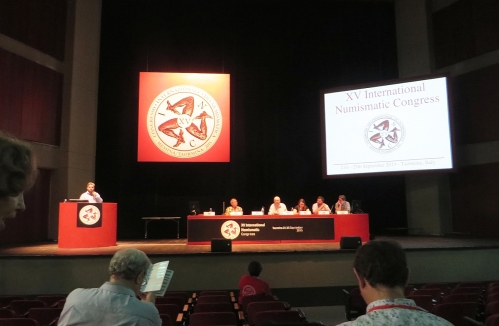 The speakers, in the theatre of the Palazzo dei Congressi

All the speakers here (except possibly us) had interesting findings to present, but of course we were there in the middle to call them into question, especially if they were using X-ray fluorescence, so discussion here got quite excited. The first team had used wet chemical analysis and some species of mass spectrometry, so they were safer from us, but were also being careful: they saw shifts in silver sources at the various mints of the pre-Roman Ægean, but also enemies sharing sources, and it seemed like some interesting maps might be drawn from this data, even if one might want some way of testing their maths against a known sample set before accepting the conclusions wholesale. I wasn’t sure about much of the second paper, which seemed to be an attempt to argue for pre-numismatic money in the Black Sea zone, and it didn’t escape me that they were thus arguing for the earliest known money anywhere, plus which their metallurgy was done with portable XRF machinery and I already knew what I thought about that. I shan’t reprise what Rebecca said because you have my reports on the same experiments here already; I hope she’ll forgive me. There are more of those to be reported on, by the way. Dr Fikrle, however, turned out to be on our side and refused to try to derive geographic metal origins from his sample: he was willing to argue only for having demonstrated relative change in silver content (though he still named some trace elements, but then, so did we at this stage). 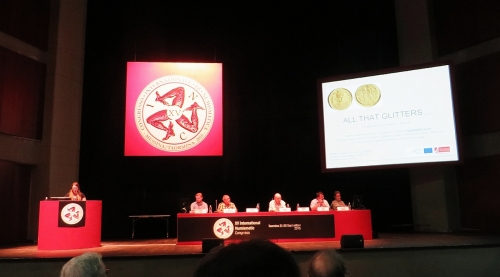 Rebecca Darley presenting our work, in her own words

The last paper was perhaps the most fun, though, as they had a documented archaeological mint site to play with at the see of Nidaros, as it then was, in Norway, including lots of sixteenth-century crucibles complete with metal residue in waiting to be analysed, which they could do with wet chemical techniques. This showed the processes by which the mint-workers attempted to purify the silver they had to mint with, thus removing the very trace elements that other teams were looking for from their essentially recycled metal stock.

Martin Allen then opened a mischevious general discussion about whether XRF was good for anything, and while all could more or less agree that XRF results weren’t comparable with each other unless the machines were all calibrated to the same baseline standard (which no-one ever reports…), beyond that opinions were quite divided. If there was a useful conclusion, therefore, it was probably about sharing standards.

Now, I’m not quite sure about what happened next. My notes from the next session have notes on only one paper of the supposed four, and I have no notes from the final session at all. I suspect that we may just have run out of tolerance for fine-grained numismatics, but this meant missing a session put on by my old Fitzwilliam colleagues. Still, I’m pretty sure I don’t remember it, so I guess we must have cut and run. My last papers of the Congress, therefore, were:

Even that leaves out two other papers that were supposed to be in that session, and I only have notes on the former of these two, which found pretty much that as long as there have been coins made in India people are on record complaining of them being forged, or even trying to catch forgers at it; one Sultan of Delhi issued a token coinage so simple that sources from his reign say disgustedly that pretty much everyone was making them at home, and the fakes were eventually all bought up and then built into embankments or used as road-stone! As so often the scale of public endeavour in Indian countries surprises the Western listener, I guess…

So yes, that was in some sense the end, and not a bad end to make, either. I was in Sicily another day or two but that was actual holiday, not even medievalising, and so I’ll leave this particular story here. Next post, some more self-congratulation (because I do have a backlog of that to get through still) and then I launch into the Chronicle of my first semester at Leeds. At least, if you can’t have currency of content, lots of the content lately has been about currency, amirite? But stay tuned, and the timeframe will advance…

4 responses to “An awful lot of numismatists in Sicily, II”