The quiet return of the ruler of all

Long-term readers may remember a post from when I was teaching on medieval views of the Apocalypse, in which I looked at some charters from St-Pierre de Beaulieu that mention the end of the world every now and then, and then stopped doing so somewhere around the year 1000. I’m still interested in that kind of inverse evidence for a phenomenon, in which what we can actually see is concern stopping, and I think that last year I found another sort. Consider: in 843 the Synod of Constantinople, under the Empress Theodora as regent for her son Michael III and Patriarch Methodios, relegalised the veneration of images of heavenly persons, or icons, in the Byzantine Empire.1 Meanwhile, at some point between 842, when Theodora’s husband Theophilos died and she assumed the regency for their son, and 856 when she demitted the regency, the gold coinage of the Empire began to show a portrait of Christ on it, and it would continue to feature either Him, the Virgin or a saint, and often more than one, from then on until the empire’s final end in 1453.2 This was, therefore, the beginning of something big, and it seems to have begun with the end of the condemnation of icons.

One I couldn’t source from the Barber Institute’s collection, alas, a gold solidus of Emperor Michael III and Empress Theodora struck in Constantinople between 842 and 856, sold in Classical Numismatic Group auction no. 64, lot 1330.

This is not true in a way, because it didn’t quite begin here. You may even remember a very similar-looking portrait on the Barber Institute coins of Justinian II’s first reign (685-695) which I told you all about in March 2015. It would be very neat to be able to say that the promotion of Iconoclasm by Emperor Leo III meant the removal of Christ from the coinage, but it won’t work: for one thing, we are as you may remember no longer sure that Leo III really did very much about icons one way or the other, and for another and more important thing, it was Justinian II’s initial successor Leontius (695-698) who removed Christ from the coinage, not Leo III (717-741). Justinian restored a slightly different portrait of Christ to the coins in his second reign, but that was stopped by his immediate successor Philippikos (711-713). Leo and his descendants certainly did change the coinage, but mainly by putting themselves on it to the exclusion of almost everything else, and it has frustrated a number of scholars who have hitherto accepted the idea that Iconoclasm was an all-consuming state policy which divided the whole empire that not only does the coinage not show any other trace of this almighty schism, but the coins of the supposedly pro- and anti- parties don’t even really differ.3 So why should the reappearance of Christ, supposedly distinguished by his long hair and Gospel Book as the Pantokrator, ruler of all, already, be connected either?

Gold solidus of Emperor Justinian II struck at Constantinople in 692-695, Barber Institute of Fine Arts B4381

Well, whether or not Iconoclasm had been a big deal under Leo III, it had certainly become one by 843. The whole issue had provoked a three-way theological dispute with the papacy and the Carolingian Empire and become a casus belli for several coups (because, like bullying someone for whatever makes them different, any excuse will do for that perhaps, but it became effective propaganda).4 This is the spirit in which our principal written sources for the controversy were written, and the whole reason why our perspectives on Leo III and his son Constantine V are so warped by them.5 Thus, whether or not the removal of Christ from the coinage had been for theological reasons or just to make it clear that Justinian II and all his policies were now gone, for those that knew those coins—and someone obviously had some of them coins at the mint to copy—it would have been seen as theologically motivated by 843. This is how I am trying to get away with arguing that the changes to the coinage in 695 and 711 were not to do with theology and that in 842×856 was, but if you will accept it, it’s another of these cases like the Beaulieu apocalypse charters, in which our sources only expose that something was a concern once it ended! 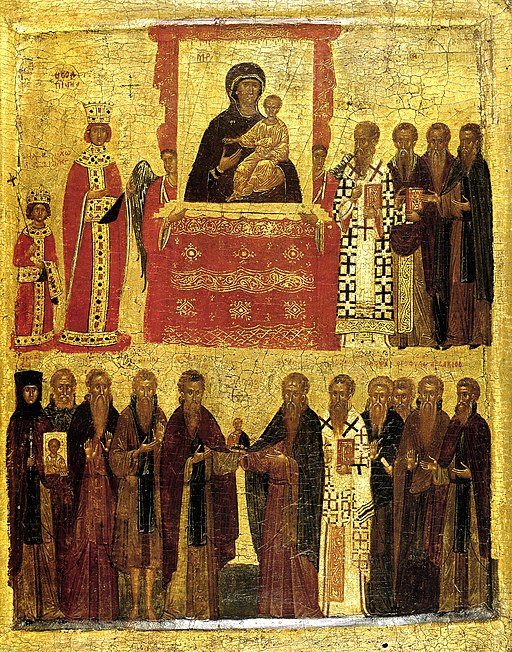 2. I met this fact for the first time while reading Franz Füeg, Corpus of the Nomismata from Anastasius II to John I in Constantinople, 713-976: structure of the issues, corpus of coin finds, contribution to the iconographic and monetary history, transl. H. Thomas Hofmänner & ed. Italo Vecchi (Lancaster PA 2007), where the issues of 843 are discussed p. 30 and illustrated p. 76, but I don’t by any means accept Füeg’s close dating of the issue, for which there is no firm basis.

3. Frustration evident in Philip D. Whitting, “Iconoclasm and the Byzantine Coinage” in University of Birmingham Historical Journal Vol. 12 (Birmingham 1971), pp. 158-163. On the actual coins see Philip Grierson, Byzantine Coins (London 1982), pp. 150-187, but even he performs this same double-think, in which the coinage is unchanged by the advent of Iconoclasm but Irene’s changes to it must be explained in its light, not in the light of her having murdered her son the emperor (p. 158) and Theodora’s restoration of Christ to the coinage (p. 178) is also an Iconodule move. Only the latter seems justified, and even that underexamined.

4. For the Western side of the story see Thomas F. X. Noble, Images, Iconoclasm and the Carolingians (Philadelphia PA 2009).

One response to “The quiet return of the ruler of all”