The second day of the 2015 International Congress on Medieval Studies—which is where my reporting backlog currently sits, alas—began reflectively…

226. The Nature of the Middle Ages: a Problem for Historians? (A Roundtable)

I went along to this mainly for reasons of celebrity-spotting, but it’s also often interesting to hear veterans of the field talk about what the field actually is, and to set it against one’s own perspectives. There are dynamics here about how elevated you get before your bird’s eye view becomes cloud-cuckoo land, but equally ones about being so close to the ground that you define the whole world by your local topography, and so on. All of this was given extra meat by this ICMS being the 50th, provoking reflection on the ICMS itself as much as anything. The scheduled presenters each picked their own targets for their muses, as follows:

Some of these were complaints, and some reflections. Professor Fleming told everyone else that we don’t use objects enough in our history, and the conference programme certainly gave her a basis for the stance. Professor Mazo Karras charted the growth of the history of women from the archive of ICMS programmes—the first session on women at the ICMS was (only?) eight years coming but the take-off point for her was when societies started to form to do the work elsewhere. Professor Freedman, who was one of the first people to realise how great Vic is as a place to work on and whom I was glad to meet at last, had done similar analysis and noted, among other things, that at the second ever ICMS there had been seven women presenting, four of whom were nuns, but also that English literature and English history still dominate the programme, but that the rest has diversified hugely since 1965. Professor Partner spoke mainly of periodization and the problem of difference, between us and our subjects, which she argued could only be approached by deliberately seeking the ‘interiority’ of our sources, a kind of ‘depth psychology’.

Of course, it now strikes me that the very word ’roundtable’ is a medievalism, not something that any of the participants mentioned, but the site I got this image from epitomises the medievalism pretty well…

This opened up the question of the session title perhaps more than the others had, and discussion went two ways, one following this, asking what we could do to avoid the problems of the terms ‘Middle Ages’ and ‘medieval’, which have myriad difficulties because of being defined only by whatever lies outside them and not having clear ends. Professor Partner had argued half-jokingly for ‘really early modern’, but David Perry, one of the organisers, argued that it means more to people outside the Academy than it does to us, and Steven Muhlberger continued that by saying that the emptiness of the category actually serves us by allowing us to fill it with whatever suits us. True, useful, but hard to make into a clear mission statement, I think…

Periodization and women’s history: what we’re up against, grabbed just now from the web

This desire for a mission statement was what had occupied Professor Bull’s contribution, which I haven’t yet discussed. This is because it seemed to me a much more UK-focused perspective than the others and to sit oddly with them. His was a pitch familiar to me from my years in Oxford, in fact, roughly that that we should stop paying attention to governments and managerial bodies who want us to justify our subject, especially in terms of its relevance to the era in which we live, not least because we medievalists will always lose to the modernists in such a contest but also because modern-day relevance must by its nature shift all the time so can’t be a foundation. I accept the logic of this but it seems to me that this is only a fortification that can morally be erected by those who have no outside paymasters. Oxford had been mostly aggrieved that those of its paymasters whom it had trained didn’t seem inclined to respect that privilege, and obviously that someone pays some of your money doesn’t mean that they should get to set all of your agenda, but to argue that they can set none of it because what we do is just worthy of support, whatever it is, is, I fear, unlikely ever to convince those with nationally-accountable beans to count. 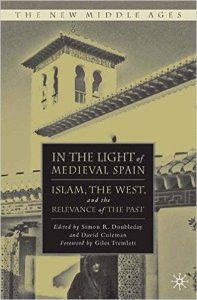 But why should we stop now, when we’re beginning to get books out of it, I am tempted to ask? Cover of Simon Doubleday & David Coleman (edd.), In the Light of Medieval Spain: Islam, the West and the Relevance of the Past (London 2014)…

The people who picked up on this in discussion seemed mostly to argue that our use to the wider world is not to show how the Middle Ages is like whatever is now happening, but to show when other people who are saying that are wrong. I feel the push to do that very strongly myself, as you may be aware, and have long argued that to use history is almost always to misuse it, but behind this is an idea of a ‘correct’, empirical and detached vision of the Middle Ages whose perfect fruition would be that no-one outside the Academy ever derived any benefit from the study of the past at all except in a pure æsthetic form; if they discovered anything that was ‘relevant’ it would have almost to be suppressed before it got into others’ hands. It seems to me that people are always going to have reasons why they find this stuff interesting and the best we can do is to train them to find it interesting enough to be careful with it. You can tell, anyway, that this interests me as a subject of discussion, but I still wish we could have the discussion with the economics in. As an earlier defender of this view said, “money doesn’t stink”. You’d think we couldn’t strike for more of it without considering where it comes to us from, but it seems not so. So anyway, from here to coffee and calmer waters…

248. The Venerable Bede: Issues and Controversies I

It is of course impossible entirely to avoid Bede or Beowulf at the ICMS, but in this instance I would of course have gone anyway because of the presence of Morn Capper, long-standing friend of both this blog and your blogger. Morn’s paper argued that the groundwork for the period of the eighth century in which the kingdom of Mercia dominated England was largely laid in the seventh century, when Bede was in some sense watching, and yet he tells us very little about how it was done: for him, Mercia under the famous King Penda only shows up when it was on the warpath, whereas our sources for his successors Wulfhere and Æthelred emphasise negotiation, alliance and sometimes infrastructure. As Morn said, all of these rulers must have done all of these things but Bede is mainly interested in how far they supported the Church and so the version of Mercia we get from him is very partial indeed. As for the other two, both were at a very preliminary stage, Mr Rochester to establish Biblical models for Bede’s structuring of the Ecclesiastical History and Miss McCann to build a network model of the History using Gephi, and it doesn’t seem kind to mount a critique of their work here.

315. Fluctuating Networks: the Constructive Role of Broken Bonds in the Medieval Mediterranean and Beyond

Here, likewise, I had mainly come because of the presence of a colleague of yore, Rob Portass, but his paper sat rather oddly in the session as it was principally about bonds formed, not broken, between local transactors in Galicia, which is after all kind of Rob’s stuff.1 He was arguing that confrontation with the actual documents, mainly here those of Santo Toribio de Liébana, showed you peasants making deals with each other and advancing relative to each other, rather than the narrative of the historiography of the area which shows you landlords beating down on peasant necks.2 Well, not here, says Rob. Meanwhile, the other two had picked up on the theme a bit more. Ms Melichar looked at the different ties late Byzantine noblewomen could break, with family, Orthodoxy, political networks and so on, usually to stay connected to one of the other of these sets, but as she pointed out, never as far as we can see to advance their own positions, rather than those of the networks within which they worked. Lastly, Mr Westwell set out a case for the monastery of St John the Forerunner of Stoudios as a long-lived ‘safe’ focus for opposition to imperial religious policies in eighth- and ninth-century Constantinople, although the high point of that was the Abbot Theodore, who set himself and his monks to guard what they saw as orthodoxy through a series of theological disputes and mounted that defence not least by many many letters to people at court, ex-monks who had gone on to serve elsewhere, friendly church officials and noblemen and women, not just mobilising support but giving backing to those people’s own opposition. This was a whole world of source material I’d had no idea about and for me one of the eye-openers of the conference.

That was the end of the academic programme for me on this day. If I remember rightly we now met back up with Morn and set out to walk to the legendary Bilbo’s, a required rite de pizza for the medievalist visiting Kalamazoo. We had no driver so set out to walk it, which is perfectly doable as long as you can work out which way to head, and that I eventually did after being 180° wrong to start with. That was worth it for the guy we checked directions with, however, who despite being of apparently normal build and health counselled us to get a cab: “It’s a hell of a walk. Gotta be half a mile at least.” We assured him that in Britain that is OK to walk and enjoyed our pizza and beer all the more for the adventure, and that was how we wrapped up day two of Kalamazoo 2015.