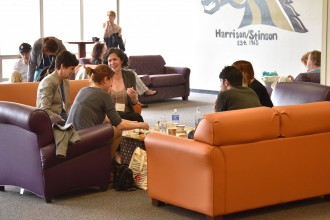 Well, we’ve had another lapse in posting, for which I apologise, but there was good reason, I promise you, not least the International Medieval Congress just gone, which was a success but really very busy. I will write about that at some point, I promise, but my ridiculous backlog is only made more so by the passing of another IMC, not least because the next thing I have to write about is an ICMS, the International Congress on Medieval Studies at West Michigan University, which I didn’t make it to this year but did last year, that being where the trip to the US lately described wound up, and that’s how far behind I am. Given that, while I don’t want to say nothing about it I do want to say less than usual, so: I am going firstly to let all the stuff about dreadful accommodation, food and coffee go as standard; secondly I will add that the actual town of Kalamazoo does however have some places worth exploring for food and drink if you are not, as I used to be, determined to scrounge all the free alcohol going on campus; and thirdly, I will try and keep my reportage on the papers I saw down to one sentence of summary or commentary each, a writing challenge I should probably set myself much more often. So, here we go with day 1, 14th May 2015!

45. The State and its Loyal Constituencies in Late Antiquity

One sentence for this is actually all I have, because I arrived late to the session and missed almost the whole paper. That sentence therefore is: “A ‘collective sovereignty’ model of northern barbarian kingship gets picked up by those further south over the 5th and 6th centuries”; make of it what you will, but I wish I’d seen more.

Arguing that although in Merovingian Gaul many of the functions of the Roman state fell away or were loaded onto new counts or old bishops, the territorial structures through which they continued to be organised necessitated a continuing level of fiscal sophistication that we could safely call a state. As Julie Hofmann pointed out, the missing part of this picture was Church organisation and its imprint on bishops’ fiscal responsibilities, but that was a part of the study still to come.

Guy, who it was that I had particularly come to see, argued instead that Merovingian Gaul was not a state, in as much as there was no single identity of which people could claim membership, but several, Frankish military, Catholic Christian, Arian Christian, Gallo-Roman aristocrat or peasant, all partially replacing the now-discredited Roman civil and patrician identity that, until Justinian I’s campaigns excluded them from it, the ruling élites in this area were still emulating. Michael Kulikowski pointed out that that identity had never been available to most of the Roman population either, but Guy argued that patronage would have joined them up to its holders.

Arguably a part of a state apparatus, a gold tremissis of the Merovingian King Chlothar II (584-628) in the British Museum, London. By PHGCOM – Own work by uploader, photographed at the British Museum, Public Domain, https://commons.wikimedia.org/w/index.php?curid=5969234

80. Leadership Profiles in the Tenth- and Eleventh-Century Church

Argued that we should see John of Salerno’s biography of the famous Abbot Odo of Cluny less as a straight biography than as a set of descriptions of the abbey’s custom justified by Odo’s good example, something that became irrelevant as actual custumaries became common and the Life was rewritten.

Argued that the commonly-propagated picture Catalan Church of the millennial era as a worldly monopoly of the comital family is based on misreadings of Catalan secondary work, rather than actual evidence, but that a binary appraisal of them in terms of being reformed or not in any case misses out what most of what made them suitable for their jobs. Rereading this paper makes me think I should get on and do something more with it, it’s maybe quite good.

A series of examples of new, and often foreign, bishops, boosting the reputation and even cults of their predecessors in order to better anchor themselves in the local traditions of their offices, and arguably imitating what could be known of their lives—Heer Byttebier argued it, but some of those supposed imitations were post mortem so I had trouble taking his case at full strength. Someone in questions asked about the æmulatio part of his title and he admitted that he had no examples as yet, so probably more could be done here.

One feat probably beyond imitation, St Clement of Metz leading the dragon Graouilly to the River Seille, a legend of the tenth century. Domaine public, https://commons.wikimedia.org/w/index.php?curid=17574925

Quite how I, with only one paper on anything like gender to my name and that unpublished, got in on this may never be entirely clear but it was fun and I don’t think I disgraced myself. I think Julie Hofmann won the day early on with her remark that we’ve been being surprised by women with power in the Middle Ages since 1908, but her deepest point may have been that when you’re dealing with power, their gender is not as important in defining what power someone has as their placement in society and their efficacy at using that. There was a general preference for the word ‘agency’ over ‘power’, which got challenged in discussion by Teresa Earenfight for I think good reason—Lois Honeycutt offered ‘autonomy’, a right to decide, as being closer to what we were getting at. Martha Rampton spoke about magic, one sphere in which women were perhaps dominant, up until around 1000 at least, and I focused on the apparent plenitude of examples from my material of women doing stuff without reference to men, usually with property but still untrammelled, and suggested that even that could more usefully be seen as a way they operated within larger family contexts than trying to separate them out into a female sphere that never existed by itself, any more than a male or indeed, as Jonathan Lyon pointed out, royal or imperial, sphere did. Lastly in the formal section, Phyllis Jestice pointed out that work on women and power has either focused on individual strong women or the whole aristocratic class and asked if there was a middle level where variation and over-generalisation might coalesce into useful conclusions. In discussion I managed to steer that through my favourite point that we need to distinguish between things that are usual but infrequent and things that are actually unusual, and Julie reminded us that the limits on female power were less institutions than straightforward misogyny, so looking at rules about what women could do only gives us the tip of the iceberg. This was all fun to be part of and I felt a lot like a real scholar afterwards, but I can’t help feeling looking back that although progress does seem to have happened these are all quite old problems. The new work that many of us were agitating for seems to be hard to do.

Not everybody can be Matilda of Canossa…

So that was the end of the first day, and then there was a certain amount of free wine and catching up with people. I can’t, by now, remember who those were, or what we did for food, but I don’t think we can have gone far because there was a blogger’s meet-up later in the evening. I felt somewhat as if I shouldn’t show my face at that given how little blog I’d written in the previous few months, nay, years, but others were in the same case and in any case these are to some extent my people, so, if any of you are reading, Another Damned Medievalist, Notorious Ph. D., the Medieval History Geek and Vellum (and others? Sorry if I’ve forgotten you), it was good to catch up and I learnt a lot in that conversation too. It overran well into the evening sessions: does anyone ever go to those? I’m not sure I ever have. Anyway, with that all concluded, it was off to my awful bed and ready for the next day, on which I will try and report shortly!