I no longer work at the Barber Institute of Fine Arts, as keen readers will know, but you could be forgiven for making the mistake given that while I deal with the backlog about half the things on the front page of this here blog are posts about objects at the Barber and that until a few weeks ago they were displaying my work in the form of the exhibition Inheriting Rome, which for reasons I explained a while back has had the benefit of a considerably extended run while the new Interim Curator of Coins, Maria Vrij, got appointed and to work. This, however, she has now done and the results in the form of a new exhibition, Buried Treasures: Uncovering Hoards, is now open and I got to go to a private view. 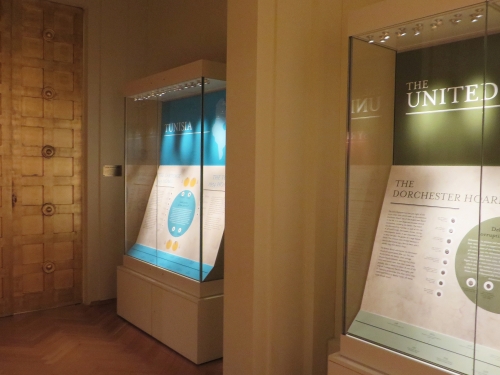 I could, if so minded, at least claim an assist on this as, when it still seemed that I would be setting up the next exhibition after Inheriting Rome, I had the idea of displaying some of the hoards that reside in the Barber in their entirety, of which there are several, one of which I am even working towards publishing. They are all kind of bronze and damaged, however, and it remained an undeveloped idea. Maria, however, who has always known the Barber Collections far better than I got to, was also aware that lots of items in the collection had come from hoards, and that has proved the seed for a rather brilliant exhibition. 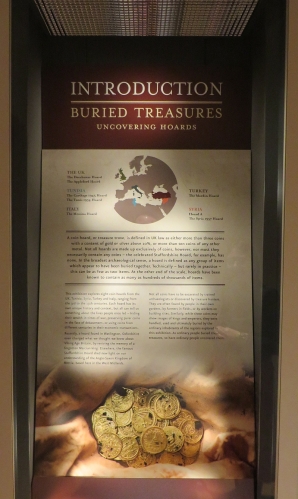 Introductory case, naming and placing the 1945 Carthage Hoard, the 1954 Tunis Hoard, the 1957 Syria Hoard, ‘Hoard A’ from Syria, the Messina Hoard, the Dorchester Hoard, the Appleford Hoard and the Mardin Hoard, parts of all of which are on display

Using the hoards and their discovery as a platform, Maria has been able to open up in accessible terms many of the questions that lie beneath the practice of burying coins, such as: why do people do it? Are the purposes always the same? (To which, this exhibition makes abundantly clear, the answer is ‘no’.) What sort of coins get buried when? Where do the coins come from? Why were they not recovered? And what can they tell us, about the history of the coinage or about the history of their times?

There are also more specific research outcomes on display here. Maria is of course one of the investigators on the project All That Glitters about which I have written here, and as a result one small part of one case uses our findings from that to talk about metal purity in the Byzantine gold coinage. If you want to know more about that, firstly rest assured that further posts will appear here as I slowly tackle the backlog, but more immediately, this coming Wednesday the 18th May there will be a lunchtime lecture at the Barber with the title, “The Marriage of History and Science: Testing the Purity of Byzantine Gold Coinage” and the speaker will be none other than myself! It’s not really my work I’ll be presenting so much as the group’s, set into a context in which the general public can understand it (or so I hope), but it should be fun, it is free and if you happen to be in Birmingham that lunchtime perhaps you’d like to come along?

I am, though, almost more pleased with this inset, in as much as without committing itself to any of my theories on the question, this is actually based on my research, which of course I talked out with Maria while I was actually working on it.1 I never thought of displaying the coins in a way that made their fabric this visible, however. As with so many elements of this exhibition, it is not unlike what we did in the coin gallery before (and the designers deserve a huge credit for making it recognisable as well as different) but it is probably better, managing to do more with less and make it more accessible. It runs until 26th February 2017, but go and see it soon! Then you can go again before it closes!