What happened to Roman municipal archives: an old problem solved?

Every now and then, when I can still find the time to read, I read something really clever. One of my favourite sorts of cleverness, furthermore, is that which takes an old old historiographical problem and finds an elegant and satisfying solution to it, and this post was occasioned by me finding one. The problem is the fate of the Roman municipal archives known as the gesta municipalia and its solver is quite possibly Warren Brown.1

One obviously needs to start by explaining what the gesta were, and this is part of the problem. Where we see them most clearly, in Northern Italy in the sixth century, they seem to have been city tax registers, in which transfers of property had to be noted so that the liability to tax travelled with the owner. If you did this, you got a docket saying that you had, so that no-one could get you for tax evasion. The trouble is firstly that this process is not evidenced very much outside Northern Italy, which raises the prospect that we are seeing something either regional or else the result of Emperor Justinian’s fiddling with documentary practice, but the gesta themselves are evidenced, across quite a lot of Frankish Europe, and the further trouble is that they are almost always attested in formulae, that is, documents abstracted from once-real charters to provide models for future practice.2 This means that it’s possible reasonably to hold opinions right the way from ‘the gesta were all gone by the sixth century at the latest and the formulae are just throwbacks that people copied because they were old but which no-one actually used’ through to ‘the gesta were still going in some places in the Carolingian era’.3 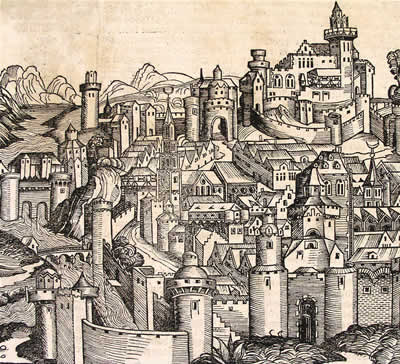 Images for this post are really hard to find. No-one seems to have put images of any of the relevant manuscripts online and the one ancient book that has one which is on Google Books is there in a scan for which the operatuve didn’t open the gatefold, so you can only see the left margin. Consequently, here is an early woodcut image of early modern Ravenna, which is where most of the relevant documents survive, you’ll just have to imagine the documents somewhere in it, invisible…

Of late the weight of the argument seems to have fallen into ‘the Church sort of replaced the gesta as a place where you could store documents’, but on the other hand in the Lay Archives book I lauded so much when it came out (and even before I’d read it, though now that I am I’m not changing my mind) Nicholas Everett now pushes the scepticism still further out, to ‘the gesta are not some ancient practice, they were new in the fifth century and died with the tax system, which is why we only functionally see them in Italy where that survived longest’.4 He doesn’t know about my colleague Arkady Hodge’s suggestion that the gesta are attested in Cherson in the Crimea also, but Arkady’s astute observation would not actually make the theory wrong: Cherson too could have held a limited tax system together quite late, and there are all kinds of reasons why it might have had a central institution of record like this, starting with it being a tiny exclave miles away from any other government.5

Ruins of the Byzantine city walls of Cherson

So it is debated! I have always felt uncomfortably torn between sides here: I am persuaded that the mentions of the gesta in a formula probably mean something, but if they had survived into the era in which the formulae were being copied, the ninth century, it seems too much to explain away the fact that we have nothing surviving that looks like actual gesta records like those from Italy, and i don’t think churches filled the role because they obviously preserve actual charters, not records that such existed somewhere else. So I wind up uncomfortably believing that there probably were gesta municipalia in Frankish Europe but that our best evidence for them is atypical because of Justinian, and though this sort of works I’d really like a better answer. 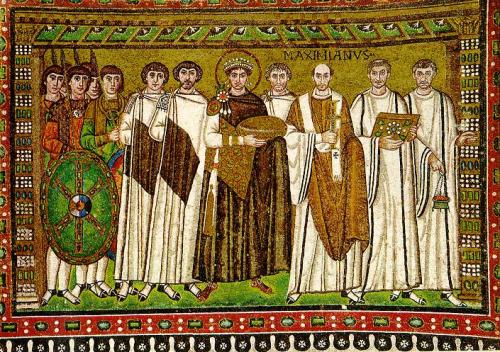 This, however, Warren has now provided! But! he is on record in several places arguing that the Frankish formulae were fairly flexible resources that people copied, and changed, because they were useful, not just out of some antiquarian spirit of editorialisation.6 How can he, therefore, follow Everett’s shattering argument, as he quite literally has to in the book in question? In two ways, it transpires; with a perceptive thesis and a wealth of previously uncollected examples (the latter of which was, of course, what the Lay Archives project was supposed to find). The thesis is the clever bit, and goes roughly like this.

What do people get out of reporting a transaction to the gesta? Obviously, yes, protection against tax liability, but also and as well as that, they get an officially-witnessed documentation of their new property. That is a thing people might want almost as much as the protection against the taxman, and most importantly it is a thing that people plainly continued to want even once (and where) the Roman tax system was inarguably dead.7 There are lots of ways we see that being done: people took their documents to court and got royal confirmations, under Merovingians and Carolingian rulers both; they took them to an ordinary court and had a confirmation issued by the gathering; they even, arguably, set up spurious lawsuits between each other so as to get the verdict publically issued that the recipient did indeed own the land.8 And, in some places where the formulae were known and the practice remembered, they went to a town and got the local bigwigs to fill the rôles of the old Roman curiales and issue something saying they’d seen the transaction documents, and the scribes who were writing this up knew the old formulae and wrote the dockets or records up accordingly. There doesn’t need to have been any surviving central archive: that wasn’t why people still did this. What was important to them was the document they got to take home.

Well, then, you may ask, why don’t we have any? And the answer to that is probably because they took them home! It is odd how few we have, even so, but we do have some, and it’s enough to convince me. The latest one Warren can find is from Prüm in 804, that monastery’s only gift of land from Angers, a city where they had a formula collection and knew about gesta (though, oddly, the Angers formula is not the one this record uses).9 That illustrates a further preservation problem, however; the scribe there copied four separate documents up as if they were one, but the first was a donation charter and really, that’s all you would need for a later cartulary. What good would it do you in the eleventh or twelfth century to copy up how this document had been confirmed by courts that no longer existed? The purpose of copying was no longer to prove possession, but to list and to remember, and for that the original charter was quite sufficient.10 Really, we shouldn’t expect any such documents to survive outside the original, and where would preserve them in the original except the personal archives that we hardly ever still have, the whole problem the Lay Archives project was meant to address?

So I think it all works, personally. It’s certainly much better than my halfway house answer and I’m very glad to have read it, certainly glad enough to share!

4. The argument for Church replacement is started in Brown, “When Documents Are Destroyed” and made more fully by Rio in Legal Practice and the Written Word, but cf. Everett, “Lay Documents and Archives”.

5. A. Hodge, “When Is a Charter Not a Charter? Documents in Non-Conventional Contexts in Early Medieval Europe” in Jonathan Jarrett & Allan Scott McKinley (edd.), Problems and Possibilities of Early Medieval Charters, International Medieval Research 19 (Turnhout 2013), pp. 127-150.

6. Brown, “When Documents are Destroyed”; idem, “Die karolingischen Formelsammlungen – warum existieren sie?” in Erhart, Heidecker & Zeller, Privaturkunden, pp. 95-102; and there are certainly other things of his I haven’t read on similar subjects.

8. Examples of all these in Brown, “‘Gesta municipalia'”, but on the fake trials, Scheinprozesse, see most of all Chris Wickham, “Land Disputes and their Social Framework in Lombard-Carolingian Italy, 700-900” in Davies & Fouracre, Settlement of Disputes, pp. 105-124, rev. in Wickham, Land and Power, pp. 229-256; there is more work to be done finding such cases for sure outside Italy, though see Jonathan Jarrett, “Power over Past and Future: Abbess Emma and the nunnery of Sant Joan de les Abadesses” in Early Medieval Europe Vol. 12 (Oxford 2005 for 2003), pp. 229-258, for at least one.

4 responses to “What happened to Roman municipal archives: an old problem solved?”