The seminar report backlog now takes us back to Birmingham, where on the 5th February 2015 Dr Matthew Harpster was addressing the General Seminar of the Centre for Byzantine, Ottoman and Modern Greek Studies. Matthew is one of the friends I hope to keep from Birmingham; we had friends in common when I arrived and then someone gave me the office opposite him, so I had quite a lot of contact with him, but still I didn’t actually see him talk about his stuff until I was working at the Barber Institute of Fine Arts. This then was that occasion, and it sparked off quite a lot of subsequent thought and action. His title was “Refashioning a Maritime Past in the Eastern Mediterranean”.

Nautical archæology under way at the Bozburun shipwreck site off the Turkish coast in 1996; it probably isn’t Matthew in that wetsuit, but it could be!

It had been Matthew’s doing that this same seminar had earlier been addressed by Rebecca Ingram on the subject of shipwrecks, because Matthew too is a maritime archæologist who once worked at the Theodosian Harbour in Istanbul with her, and like her he also had a particular shipwreck with which he was concerned, a ninth-century one off Turkey.1 This seems likely to have been a Byzantine one but as Matthew had poked at this he had become less and less sure that we have any solid methodology for making such judgements: does one go from the cargo, the personal effects of the crew, the location, the building style, or some or all of these? All of these things could easily be out of place as we understand them. Matthew had gone so far as to assemble all the 254 attempts to identify shipwrecks in the International Journal of Nautical Archaeology from 1972 to 2012 as he counted them, and found no consistent practice.2 At that point his project became the one that then brought him to Birmingham, to database as many shipwrecks as possible from the ancient world and try and pattern-spot in such a way as might underpin such a consistent methodology for identification. 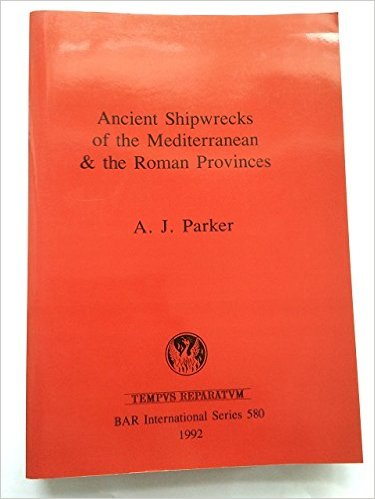 There is at least an easy place to start, an inventory of 730 ancient shipwrecks assembled in the early 1990s to which Matthew was able to add 120 more; the standard of record is of course variable but it’s a start.3 From there Matthew had used the cargo, fittings and personal items recorded for each wreck to work out route profiles for each vessel, assigning each of its items a point of origin and using those points as plots for a polygon that represented that shipwreck’s notional catchment area. Of course, this relies on others’ identifications of the goods and archæology being able to assign them correctly to places of origin, and as Morn Capper (present) pointed out, it is also tracking the finds, not the ships, and if those finds had moved in several ships in turn, not one all the way, the polygon of the one that actually sank would be considerably larger than that ship’s own sea area.

This is, sadly, not Matthew’s work but someone else’s attempt to do something similar, mapping the ancient Mediterranean’s nautical archæology, but only where it now rests, not where it had come from… The project concerned is called Benthos, and looks interesting but doesn’t seem to have progressed beyond its preliminary phase as of three years ago, alas.

But, this is something that one can do, it’s still telling one about a species of connection and the results are impressive, the more so because of the work Matthew had done with Dr Henry Chapman to load them into GIS and process them. I wish I could show you one of the resulting visualisations, as they are not only fascinating but things of psychedelic beauty, but Matthew seems not to have put any of them on the web where I can steal them, goshdarnit. In any case, in so far as what they show can be summarised, that summary might be:

Matthew’s main point was that, within the limits of the evidence, his method could be used to measure and display change over time in the much-vaunted connectivity of the Mediterranean, but in discussion, predictably, the gathering set to trying to work out what else it told us or might do if extended.4 Archie Dunn wondered how journeys recorded in texts would map using such a method, Rebecca Darley offered military campaigns, as well as coins of course, and I wondered about inscriptions and diplomatic formulae. It seemed to me, and I said out loud, that all these things might well map out differently and result in an even more complex and textured picture of how people moved around the Mediterranean. And at that point Professor Leslie Brubaker said, “Funding bid!” and well, somehow from this seminar came a research proposal involving seven people, including myself, Rebecca, Matthew, Henry and Leslie, and it’s currently under review after making it to the second round of the European Research Council’s Advanced Grant competition, so I guess we shall see what a great fire a little matter may yet kindle; I’m still quite excited about the prospects it raises. But whatever comes of it, Matthew started it, by giving this excellent paper to an audience who thought of useful questions, and that is really how all this is supposed to work, isn’t it? 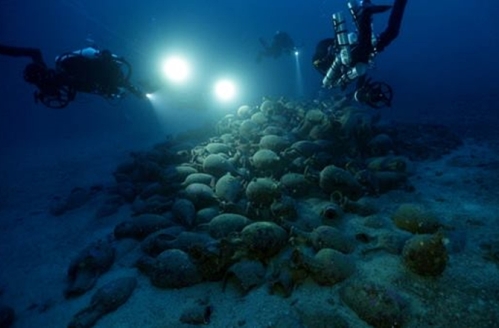 Who knows what we may find? Though I at least won’t have to get wet for my portion of the material if it all comes together… This is a recent excavation off the coast of Sicily of a ‘2,000-year-old ship’ about which I can tell you no more, but it’s a good image to close with!