Joan Vilaseca has just mentioned, in comments on the post before last, an instance from Carolingian Catalonia where the pope was called on to amend the Visigothic Law. I had seen this before, at the beginning of my Ph. D., and been reminded of it occasionally since, but while I was looking at the lack of evidence for Carolingian-era liturgical enforcement I had come across it again, and it’s such a peculiar episode it’s worth writing about as an instance of the way that early medieval law was often much more about satisfying competing requirements from those demanding settlement than about following what a lawyer might now say should have applied.1

It’s time for the most available image of a Catalan copy of the Law again! Abadia de Montserrat ([1]) [Public domain], via Wikimedia Commons.

If you’ve been reading a while you’ll probably by now remember that as far as we can see, when the area that’s now Catalonia was adopted into the Frankish empire in the ninth century, it was allowed to continue using the Visigothic law that was still running in the area despite its originating kingdom having ceased to exist in the early eighth century.2 It is much cited and quoted in local documents and it covers most eventualities, but apparently not all, which left the governors of the late-ninth-century province with the question: what do you do when the law of the Goths needs modifying and there’re no Gothic legislators left to do it? 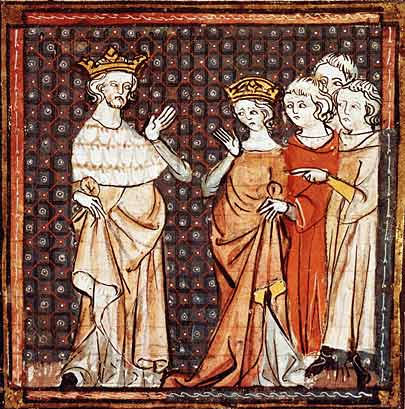 A fourteenth-century depiction of King Louis II of France, missing star of this story; as far as I know there is no earlier picture of him surviving. By Anonymous [Public domain], via Wikimedia Commons

We know that this problem arose because it was brought before the council of Troyes in 878. This was a tense time for the kingdom of the Western Franks under which what is now Catalonia then fell: Emperor Charles the Bald had died in Italy in 877 leaving his eldest, but deeply mistrusted, son Louis II, the ‘Stammerer’, to succeed not just to the kingdom but to the major revolt that Charles had been moving to suppress.3 By the time of the Council of Troyes much of this was quieted but the result was that major reassignments of offices had to be carried out; importantly for Catalonia, this seems to be when Count Guifré the Hairy was given Barcelona to run, because the previous incumbent, Marquis Bernard of Gothia, had been one of the rebels.4 Guifré himself wasn’t apparently present, but others were, including Archbishop Sigebod of Narbonne, who had a while before failed to find the relics of Saint Eulalie in Barcelona, and no less a figure than Pope John VIII. And it was Sigebod who brought up the problem of the law.

Pope John VIII, actual star of the story, in a no less anachronistic portrait

As the papal bull that records this tells it, Sigebod showed the pope a copy of ‘the book of Gothic law’, and stressed that there was nothing in it about sacrilege and that the book explicitly prohibited its judges from hearing cases about things that it didn’t cover (which indeed it does). We don’t know why Sigebod had brought this up now, but his complaint is clear: “thus the right of the holy Church was being suffocated by the provincial inhabitants of Gaul and Spain”. So they went to look for other law. First up, presumably because they were asking the pope, Bishop of Rome after all, was the “law of the emperor Justinian”, which laid down a penalty of five pounds of the best gold for sacrilege, but they found a more lenient prescription “that was constituted by the pious prince Charles”, a fine of thirty pounds of silver, “that is, 600 solidi of the purest silver”. There’s a range of reasons that’s odd, but anyway, the pope preferred the lighter penalty, and further ordained that anyone not paying this fine will be excommunicated until they do. John concludes: “And we ordered that this law should be written at the end of the book of worldly law.”5

A theoretically-minded lawyer would quite possibly find this very frustrating. Firstly, Catalonia is under a Carolingian king at this point, and as this council reveals there is Carolingian legislation that covers this, to which surely this area was theoretically subject. It’s not as if Carolingian legislation wasn’t known and used in the area, or known at least; we have copies of it from this era, as you see at right.6 All the same, that apparently didn’t work for Sigebod; he needed to be able to cite the Visigothic Law. Now, that confines the right to make legislation to ‘the prince’, which term surely encompasses whoever is in charge of the secular government.7 That, at this point, was surely King Louis, in whose very court they now stand, but it is not him they consult. And when the pope is consulted instead, his first port of call is not any local law, but the law of a man who had never ruled this area, Justinian I (though it is interesting to see Justinianic law in use here so early rather than the Codex Theodosianus or its derivatives). Admittedly, what they wind up with in the end is Carolingian law, all the same, so you could if you wanted to squint see this as an elaborate confirmation that the Carolingians have indeed replaced the old rulers of the Roman Empire, and if so then there’s no-one more fitting than the pope, whose predecessors had crowned the first Carolingian and raised Charlemagne to the rank of emperor, to make it apparent. But I don’t think that’s what was happening here, because Louis didn’t get to occupy that rôle; it wasn’t he who issued the new decree. He was thus neither emperor-substitute, even though he was son of the last emperor of the West, nor ‘prince’ of what his son would later call ‘our Gothic kingdom’.8

Let’s be as clear as we can: the king still ruled the area, or the relevant people wouldn’t have been asking about this at his council. At this same council, indeed, he would issue a precept to Bishop Frodoí of Barcelona, who was apparently there and whom you might think would be concerned with this legislation given the problems he apparently faced, confirming the rights of Barcelona’s cathedral, that same text which is first to mention the relics of Saint Eulalie being there.9 So the royal word and ruling was worth something still! Apparently not enough, though, for the king to be allowed to add to the Law of the Goths like the real princes of yesteryear. Instead, the pope, whom no-one would yet call a princeps, and the assembled churchmen in council with him, got to add to the “codex legis mundanae”. It seems then that royal authority in Catalonia was already fading into the half-light it occupied for the next century-plus here: it was useful, prestigious and traditional, but passive; it could not now do anything new any more, so for that new solutions were required. The one that was improvised here was not decisive, but it’s surprising. It surprises me not least because apparently Louis accepted this replacement of what we might think should have been his authority; only four years before, after all, his father was still dispatching missi to the Spanish March to check up on the misuse of royally-granted privileges.10 Louis’s position was weaker, but would Archbishop Sigebod really have dismissed it if Louis had issued a capitulary enforcing his great-grandfather’s rules once more? I don’t understand why it was the pope who got to do this, but I think that that fact shows us that something crucial had changed here, very recently.